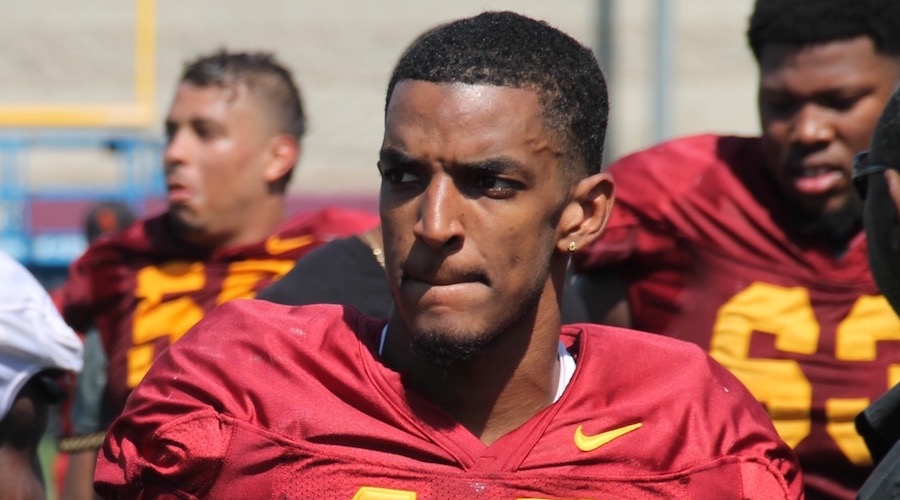 It was an upbeat shortened practice with a lot of energy as the Trojans get ready to hold their annual team awards banquet on Wednesday night.

One of the first things we saw as practice began was a group of special teams players playing catch on the far sideline, and Jake Olson was one of the players throwing the ball. Someone else was catching for Jake but he was throwing it, and pretty accurately too.

There was a lot of work on Ohio State with Jalen Greene getting some work in the role of multi-talented Buckeye QB J.T. Barrett, a respected team leader who has thrown for 35 touchdowns this year.

“He’s won a lot of games at that place but we’re equipped to face him after seeing guys like Khalil Tate,” USC coach Clay Helton said. “What really stands out to me about him is his downfield throwing. They have three big wideouts averaging over 15 yards per catch and they know how to spread the field.”

Another one of the elements of the Ohio State offense that clearly has the USC players and coaches impressed is the offensive line.

“They are mean and nasty and they work really well as a unit,” Cameron Smith said. “But we know what it’s like to go up against some great offensive lines like Notre Dame and Stanford, so we’re well aware of what an offensive line like that looks like.”

Helton was asked at his post-practice media session about playing at AT&T Stadium, against an opponent like Ohio State.

“I reminded our players that the last time we went to this stadium we got our butts beat,” Helton said. “Ohio State is an elite team, probably the best we’ve seen this year, and when you’re talking these two teams you are talking about 19 national titles, 14 Heisman Trophies, these kids are really excited about that. And so I’ve had to remind them about the need to work hard now because in a blink of an eye we’re going to be in Dallas and we’ll be playing the game. We’ve got to get our preparation in now.”

As for the on-field practice, Iman Marshall had a nice play near the goal line when he went up and batted the ball away from Josh Imatorbhebhe. Later in the day Josh’s brother Daniel showed well for the family when he caught a pass over the middle and basically shrugged off a tackle attempt from Chris Hawkins.

One of the interesting service team position assignments was Juliano Falaniko at ILB, with Olajuwon Tucker seeing time as well. Falaniko has primarily worked at OLB thus far.

Clay Helton said there are no changes on the injury front although Porter Gustin did show up on the practice field without a boot for the first time, and Helton said “there is no pain right now so it’s good to see that progression.” As for Tyler Vaughns, he fell on his shoulder yesterday but should be good to go in a few days by the time the team comes back next week for practice.