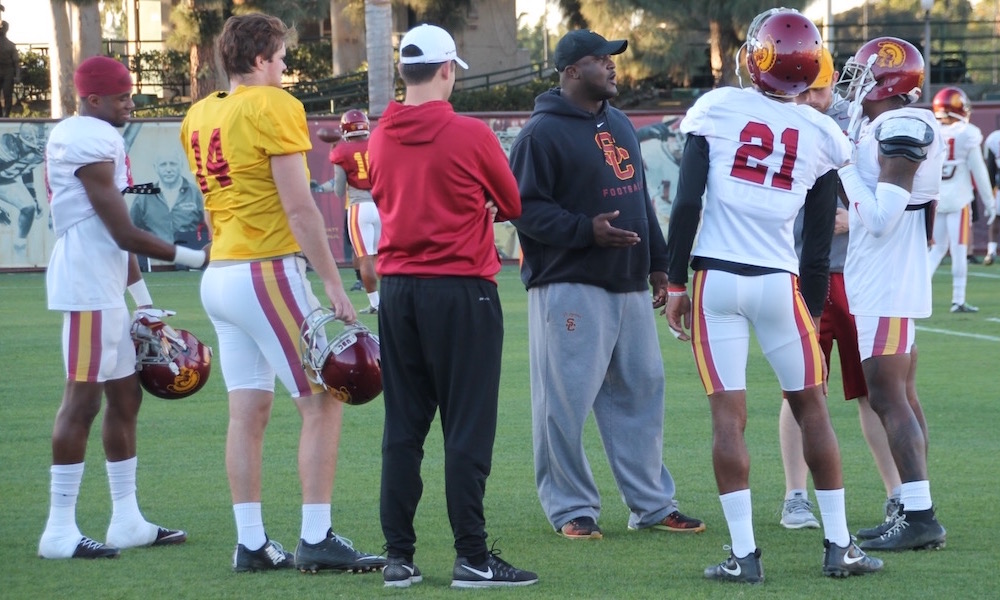 The regular season is over, finals are done and the Trojans are back on the field to start preparations for the Ohio State Buckeyes in the Cotton Bowl.

Clay Helton had his team in full pads today for what he called a physical practice session, and the team will practice the remainder of the week, and then come back next Monday and Tuesday for another pair of physical sessions before sending the players home for a few days of holiday break with their families, and then departing for Dallas on the 23rd.

The first drill of the day was the ball placed on the offense 5-yard line having to drive the length of the field. It was first offense against second defense (with the offense scoring) and then the second offense took their turn against the first defense, they got across midfield but did not reach the end zone.

One of the first things we noticed was the fact that Porter Gustin was not in uniform today. Gustin came out with his jersey on but no pads, and a boot on his right foot. Helton said Gustin has not done any football movements but there is a long way to go before a game is played so right now he’s considered day-to-day.

Another thing that we noticed early is that Tyson Helton was not in attendance after being named a coach at Tennessee and joining their staff immediately. Tyson will be replaced at SC practice through the bowl game by Bryan Ellis, who joined the USC staff last spring as an offensive administrative assistant after coming from Western Kentucky.

“First of all, I’m very proud of Tyson,” Clay said of his brother. “He helped us win a Rose Bowl and a Pac-12 title and I really appreciate the job that he did.”

Helton stopped short of revealing any plans for how he would handle the current job opening, if Tee Martin would move to the QB coach spot, and how he might handle the upcoming 10th coach addition.

“Whenever we make those decisions in the future we will let you know,” Helton said. “For now, nothing will change, Tee will make the play calls and I will throw out a suggestion here and there.”

Martin said that when you win at a school like USC there are bound to be coaches getting calls from other schools. He said he did talk with Tennessee but that once he was out of the discussion for the head coach role there wasn’t going to be any move for him. There is also bound to be discussion of him moving to the QB coach role, considering he is a former national title winning QB, but he said there is a reason he coaches receivers now.

“I had been a quarterback since I was 6 years old so when I got to work with receivers it was so much fun. Don’t get me wrong, I have a lot of communication with the QB under this system, we may not meet but we talk when we need to talk. And for the last two years I’ve stood behind the QB for every play in practice. But I also think it’s important for the QB coach to be the voice he hears, when I played QB I didn’t want too many people in my head.”

Speaking of the SC quarterback, there is a lot of speculation about the decision Sam has to potentially enter the NFL draft, and Helton said the process is underway to request information from the league for Sam and “up to 10 players on our roster who could have that decision to make”. The info from the league evaluations will come back by the 15th, and then Helton will review that info with the players and their families.

“Every situation is different,” Helton said of NFL decisions. “Is it time for you? Are you ready? And sometimes there are personal situations where a player just has to go for family reasons. And what I do with all them when they tell me their choice is I tell them I love them and wish them the best.”

In terms of the actual practice today, some of the highlight plays included: Josh Imatorbhebhe going up high to make a grab against Iman Marshall, Levi Jones making a nice pass deflection, Darnold to Joseph Lewis with a pretty completion along the sideline, Matt Lopes with an interception off Matt Fink, and John Houston with a PBU on a pass intended for Daniel Imatorbhebhe.

“I’m here and barring any changes I don’t see myself going anywhere, my wife loves it here” – Tee Martin