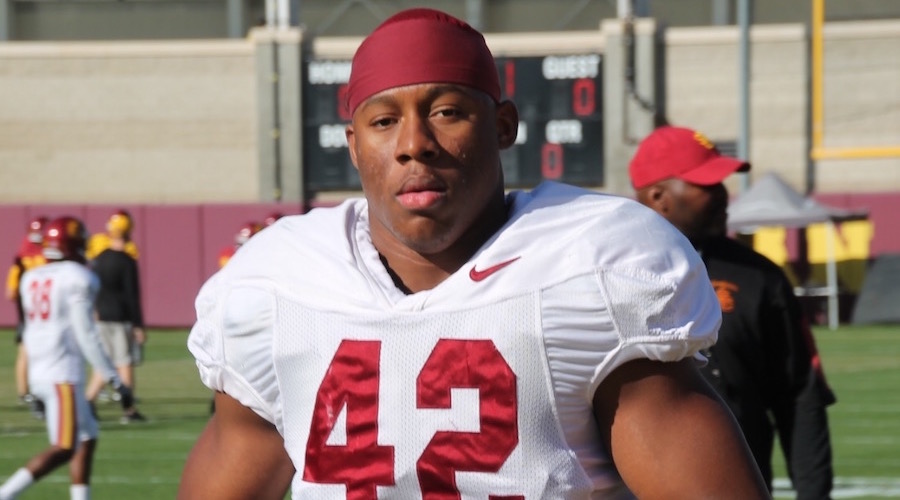 The Trojans moved closer to the annual crosstown showdown with the Bruins with a pair of familiar faces back in the starting line-up as Uchenna Nwosu and Iman Marshall both were running with the 1’s to begin the day.

It remains to be seen if Marshall would indeed start at corner, as Isaiah Langley has performed well in his absence and Iman is still easing back into things, but at the very least it adds another body to the corner rotation.

“You’ll see three guys, really Isaiah, Jack [Jones] and Biggie will all roll in there,” USC coach Clay Helton said. “Biggie looks a lot more confident this week than he did last week. We were very careful with him, especially with that sprained knee at his position, so we wanted to make sure he was 100 percent. He looks like he’s getting that way.”

Nwosu, on the other hand, will certainly be back as a starter to help apply as much pressure as possible to UCLA quarterback Josh Rosen.

“Uchenna looked good. We gave him about half the practice and he moved around very well. I think any time you play an elite quarterback, if you make it into a 7-on-7 football game, and he can sit back there, he will dice you. He’ll take full advantage of it. We’ve really got to do – whether it’s four-man rush, five-man rush, six-man rush, we have to be able to affect his timing, and get him uncomfortable.”

“I thought Christian did a really nice job after being out for a couple weeks. We really limited his reps in the game to pass rushing downs, and he got a big sack for us in that game vs. Colorado. Structurally his hand is great. He’s not feeling any pain. We’re protecting it. It’s just about getting back in football shape, and I think that he’s in a position where he can contribute more this week. I don’t think it’s a full game, but we’ll keep easing him back along. As far as Stephen goes, He’s looked good. Last week he was able to get in some pass routes for us on some pass downs. I think he’ll be able to contribute more. He’s looking very healthy this week, and explosive. I think he’s getting back into football shape, and the pain doesn’t seem to be there anymore, so it’s good to see.”

Jamel Cook did not attend the first part of practice but he came on the field halfway through in street clothes. Ronald Jones left practice shortly afterwards, didn’t appear to be any issues. Matt Fink did not attend practice, he got fallen into on Tuesday and got a knee sprain, Helton said he should be OK for Saturday.

As for the practice itself, two of the biggest plays that were made early were catches in a one-on-one WR/DB drill where Pie Young and Jake Russell both made impressive grabs. Joseph Lewis also had a nice deep ball from Jack Sears. Carr showed off the pass catching that Helton referenced with a wheel route for a long gain and Darnold fired a strike over the middle to Tyler Vaughns.

In the final team period, Cameron Smith got things started by batting away a pass intended for Daniel Imatorbhebhe. Darnold hit Trevon Sidney with a pass in the flat. Langley knocked away a pass attempt to Velus Jones, and Chris Hawkins intercepted a Darnold pass. C.J. Pollard stopped a Carr run.

There was a lot of work on kickoff coverage and kickoff return.

“We got a lot of work today on 3rd down efficiencies, I think that’s going to be a big key in the game, we need to hold the ball offensively,” Helton said. “We also need to play clean football in the turnover game.”

It seems like the Langley’s man coverage skills seem to translate well to what Clancy wants to do defensively. How much of that has allowed for the safeties to kind of play inside the box?

Well you saw last week how tight we played to the box. Going into that game we truly felt like we had to stop Lindsay in that game to win, so we sacrificed bodies to the box, and left our corners on man. We did get hurt twice with it, but at the end of the day you look up and Lindsay only had 67 yards rushing, and I thought the two safeties really came down and made some nice plays in the box as far as tackling. They’ve really done that the past three games. So, it has helped us to be able to have the man coverage like we have with an Iman, like an Isaiah and like a Jack. It helps you when you do have to load the box.

How much has the return of Daniel Imatorbhebhe helped with the spacing at the wide receiver position, and taking pressure off those slot receivers?

You don’t the numbers that Daniel gets, but his presence there, I think, helps because of his vertical presence there, especially the speed he has down the field. Somebody has to cover him, and the safety ends up capturing him, and now it’s freeing up somebody else. So, to have him back has been a blessing.

What’s the toughest thing Josh Rosen does to defend?

In my point of view, just being a quarterback coach by trade, I’ve been very impressed, one, his ability to pull the trigger. He has no fear. I mean, he sees a window, he doesn’t hesitate, he pulls the trigger. He has the arm strength to get it there, and he’s deadly accurate. He’s a Sunday quarterback. He’s as good as they get. We’ve got a huge challenge defensively going up against a really good guy.