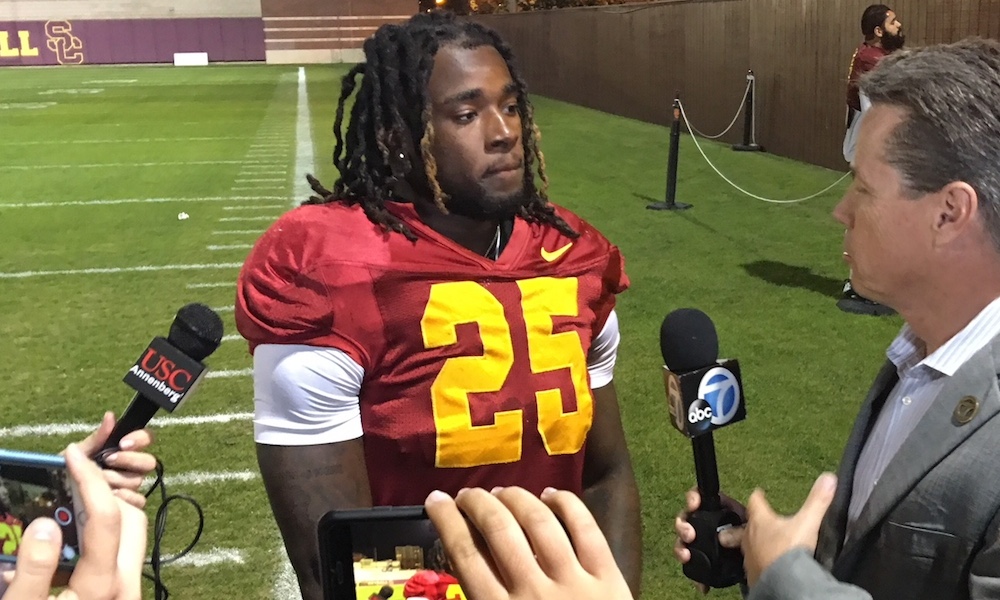 It’s Rivalry Week for the Trojans with the UCLA Bruins coming up on Saturday and you definitely noticed a little bounce in the USC step today.

Maybe it’s the fact that the spot is secure in the conference title game, maybe it’s the thought of the bye week coming up, or perhaps it’s just the chance to beat the Bruins, whatever the case it definitely brought out a good day of practice for the Trojans.

For all intent and purposes it was particularly good for the defense. We saw the ball in air quite a bit today against the USC defense, obviously in preparation for Josh Rosen airing the ball out a lot, and the Trojans made their share of plays.

In an early drill saw Jackie Jones made a nice interception against Tyler Vaughns on a deep ball, and Isaiah Langley had a pick while in coverage on Vaughns a few plays later. The team moved to Brian Kennedy Field and C.J. Pollard broke up a deep ball the goal line intended for Steven Mitchell, we also saw Bubba Bolden knock away a ball intended for Josh Falo. Later in the same drill it was hometown friends Pie Young and Jamel Cook who arrived at the ball at the same time, and it was Young who came away with the ball to a lot of celebration from the offensive side of the ball. Toward the end of the day there was a pick-6 by Jalen Jones after he stepped in front of Joseph Lewis to pick the ball from Matt Fink, and then Matt Lopes had a pick-6 off Darnold.

There were some plays made by the offense as well. Perhaps the biggest was a touchdown deep to Vaughns, who simply went over Jay Godfrey to make the grab. Fink hit Pie Young with a deep crossing route, Ronald Jones had a run at the end of the day to get into the secondary, Darnold hit Daniel Imatorbhebhe with a mid-range pass, and also had a nice connection with Velus Jones.

After the practice ended, Clay Helton was asked about possibility of this being a trap game, and Helton was quick to talk about why he doesn’t think that will be the case, and how it will be important to guard against seniors getting too emotional in their final game at the Coliseum.

“No, I think this game is too important for our us and our seniors,” Helton said. “When you look at it, the victory bell is something that is truly special to this university. We understand how important this game is to our fan base, and also you think about what can be accomplished by this group of seniors. To be able to say, ‘you know, in our last two years we defended the Coliseum.’ You know, undefeated in the Coliseum, to have two perfect Novembers in back-to-back seasons, what a great honor for them. To produce a 10-win regular season – it’s only been done 16 time in the history of this university in over 125 years. It would really be a statement to our seniors, to really put an exclamation point on our regular season going into the Pac-12 championship game. We’ve always taken the approach here, playoff football, 1-0 each week, and that’s the way we’re doing it this week.”

You’ve been a part of the rivalry for a long time and have seen kind of the flip flop of who’s ahead. Is there any way to explain how one program gets ahead?

Being a part of this rivalry, I think it’s uniquely special. I’ve been at Auburn University when I played as a young person, and you see that Auburn-Alabama rivalry and how special it is, and there’s a lot of these rivalries that are real special. I love this one because it’s so unique because we live in the same town. Really, when you think about the rivals around the country, they’re miles and miles apart. Here, we live right across the street from each other. We grew up together. All these kids know each other. And there’s a lot of respect between the two programs, and it’s been a lot of fun in my eight years here to be a part of it, and see how important it is to the community, to the city of Los Angeles, and it’s a fun spirited, very competitive competition. I look forward to it Saturday.

You have a lot of players who could be playing in their final home game in the Coliseum. How do you communicate with the team knowing that people can make too much of that or be really emotional about that?

“I think it’s part of the passion that goes into college football and it’s something special when you walk into that Coliseum, and you know it’s your last time. That’s special and there are emotions. The key to it is to be able to control those emotions to be able to do your job. To play with passion, but to play with intelligent passion would be it. So, it’s always a challenge, especially with young people. You address it. We started talking about it today in our team meeting, but these kids, especially the older kids, when I think of an Uchenna Nwosu, and a Chris Hawkins and those types of kids, very mature souls, and I expect they’ll play great on Saturday”.

Why has Sam been table to tuck it and run it more successfully recently?

I thought he made some great decision, really, in the last six games using his legs. You look at 15 touchdowns and only three interceptions in the last six games, and a lot of those great decisions are bringing the ball down. And I thought the run that he had the other night, I was kidding with him today, he got up to 19.3 miles per hour on the GPS system. He said, ‘that’s about the fastest I’ve run since high school.’ [laughing]. But he’s making really good decisions, and part of being a good decision-maker with being an athletic quarterback is getting plays like the other night. I thought he did a good job.

Injury-wise, we held Rasheem Green again with a little bit of a shoulder, Uchenna Nwosu with an ankle, Chase McGrath with a groin [and] Tyler Petite with a shoulder. They’re all day-to-day, expecting all of them to be ready by Saturday.We’ve been really cautious with Biggie Marshall, obviously, with a knee, and he’s getting to where you see in practice you can see the confidence that is coming back. I talked to him yesterday and he’s getting more and more confidence. I would expect him to contribute in this game for us.