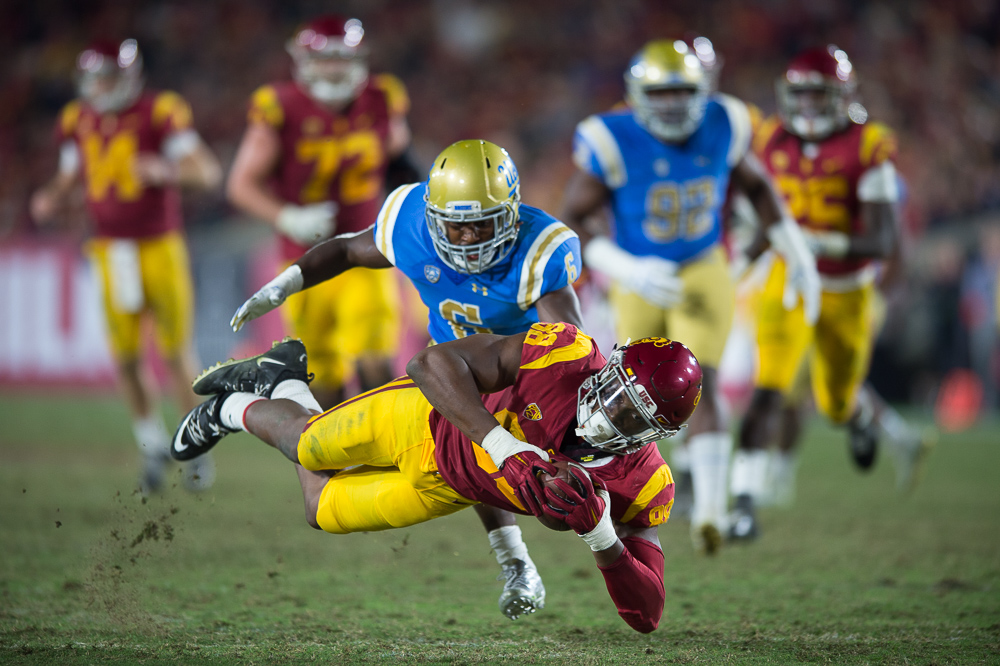 * With the time change, most of Wednesday’s practice was more like a night practice under the lights, and the Trojans worked out in helmets and shorts.

* There was a noticeable lack of media in attendance until nearing the end of practice.

* The team did its stretching listening to rap music. There were occasional bursts of vocal  emotions, but nothing to indicate this rivalry week was any different than any other week.

* Head coach Clay Helton was the most animated practice participant. He even ran down the field to cover punts.

* Center Jake Olson did a couple of snaps much to the encouragement of his teammates and coaches.

* Linebacker Porter Gustin sat in a mobile cart and played catch with defensive lineman Brandon Pili who was not dressed.

* The Trojans worked on defending the pace of Chip Kelly’s UCLA offense.

* The most intense practice period was when the offensive and defensive lines went at in one-on-one drills.

* Backup quarterback Matt Fink was throwing in selected drills and was showing no effects from his broken ribs.

* Former Trojans defensive back and broadcaster Chris Hale was in attendance.

Clay Helton: “We primarily focus on two areas today offensively primarily on third downs. I  thing it’s always important when you play a coach Kelly team is to keep that offense off the field because you’re talking about 80 plays a game that they do. I looked at the last two games and we were 57 percent versus Oregon State and 7 of 17 last week and just over 40 percent. We want to be at a 48-plus percentage. We’re striving hard to keep their offense off the field.

“Defensively, we’re really working the tempo because anytime you play Coach Kelly it’s going to be fast, faster than you’re normally used to, so we changed up a little bit on the defensive side of practice field. I think it has been good for us in speeding things up. It’s been a good week thus far and look forward to Red Zone Thursday and get going.”

Clay Helton on injuries: “No new news on the injury front injury wise.”

Clay Helton on the return of backup quarterback Matt Fink and who would back up JT Daniels if he was injured: “I am evaluating where Matt is at this week. We’re not allowing him contact right now. We’re just trying to get the rust off of him a little and get him reps. I am going to talk with the doctors at the end of the week and see where he is at. Plus, he is knocking off a lot of rust. We’re splitting those reps between those two guys (Fink and Jack Sears) who are progressing as quarterbacks and by the end of the week I’ll make a decision. He (Fink) could play if needed. Obviously, the man had broke ribs three weeks ago, so I am going to be very careful. Anytime you haven’t played in three weeks there’s some rust. He’s had two good days of knocking that off.”

Clay Helton was asked how he knows he is playing the best quarterback: “I have been doing it for 24 years and know from experience. Right now, JT is playing good football. I do know that we’re extremely fortunate to have Jack and Matt. I thought Matt came in the Utah game and did some great things and that’s what you want. You want as many good quarterbacks on your football team, but right now JT is our starter.”

Clay Helton was asked if he had any problem putting in Jack Sears if the offense started to stall in the second half: “It’s a hypothetical. Last week’s stall (against Cal) was not an act of the quarterback. It was an act of three dropped balls on second down, an act of two false start penalties, and a snap going over our head that produced five thirds and seven plusses. That’s hard on any quarterback. I don’t care what level you’re on. All of sudden you go from third and one to one to five in the first half to five third-and-longs, it’s a little bit tougher.”

Clay Helton on corner Iman Marshall apologizing to the team after his unsportsmanlike penalty late in the Cal game: “I thought it was phenomenal. We talked one-on-one and visited and he said, ‘Coach, obviously, that’s not what I want for a younger player to learn. I got caught up emotionally. I’d love be able to apologize and I want the young guys to know that’s what happens when you play an emotional game, you’ve got to hold your composure.’ We addressed it to the team, a four-play clip of not only him but Amon-Ra (St. Brown) and being able to show them this is what hurts you. If you’re going to make those decisions, you’re going to stand over by me for half dozen or six to eight plays to watch and be able to calm down and know if you do it again, you’re out of the game. I thought it was a pro move by Biggie and that’s who he is.”

Defensive Coordinator Clancy Pendergast on the UCLA offense and how Chip Kelly has changed offensively since returning from the NFL: “It’s very similar. The running game is similar in a lot of ways. I think there was maybe more Veer blocking schemes than he had at Oregon. I think the passing game has become a lot more expansive since he’s been in the NFL. You can see a lot more concepts.”

Defensive Coordinator Clancy Pendergast on the UCLA junior running back Joshua Kelley: “I think he’s a really good back. I think we’ve faced a lot of good backs this year, and he ranks right up there. He’s the complete package. He can run in between the tackles, bounce the ball outside, and he’s a very good pass catcher out of the backfield. I think one of the best things he does is pick up blitzes and pass protections. I’ve been really impressed with the way he has played.”

Defensive coordinator Clancy Pendergast on who on his defense has impressed him up to this point in the season: “(Defensive tackle)Jay Tufele up front. (Linebacker) John Houston has made strides from where he was last year. Cam (Smith) has been solid when he has played ( middle linebacker). I think he has gotten back and in his second game he has gotten the feel of the speed of the game. He was better last week than maybe the week before. (NK) Ajene (Harris) in a short amount of time has made a lot of progress at the safety position, and Marvell (Tell) has been banged up the entire year and has fought through things. He played pretty well up along the line of scrimmage last week. And Iman (Marshall) has been pretty solid and has had a real solid year at the corner position.”

DL Jay Tufele: Asked what he see in this UCLA offense, defensive tackle Tufele said, “I see a team that’s getting better week by week. They’re going to come out with a lot of power, and they’re going to try to hammer the ball down at the beginning of the game. But I think that we’re going to come, but I think our first responsibility is to stop the run and once we stop the run, we’ll have our opportunities to rush the passer. I think it’s going to be great and a fun game.”

CB Iman Marshall: Regarding on much he boosted his NFL stock this season Iman said, “I don’t worry about that. I worry about this team; I just worry about playing this game and appreciating each and every moment I step on the field.”

Iman Marshall – Part 2: On what he learned from his fourth quarter unsportsmanlike penalty, “That’s football, but at the end of the day you have to control yourself in the heat of the moment.”