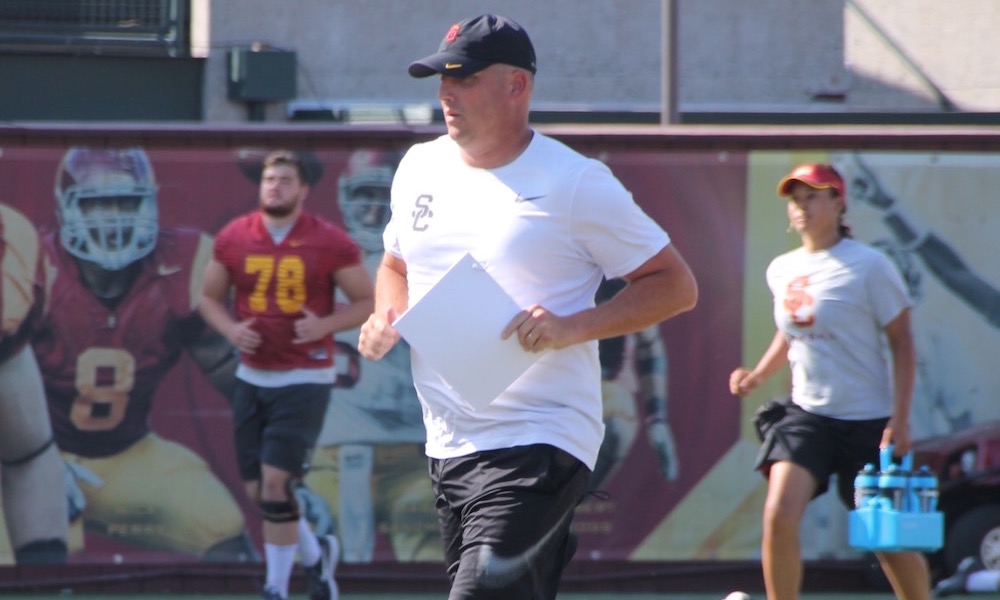 With USC’s upcoming clash with Arizona in the Coliseum just three days away, the Trojans took part in another shorts-shoulder-pads-and-helmets practice session on Brian Kennedy-Howard Jones Field on Wednesday, and for the second consecutive day Stephen Carr got some light work in. The freshman tailback, once again, appeared to be moving well, and he even took part in every 11-on-11 period. Following practice USC head coach Clay Helton acknowledged that it’s looking more and more likely that Carr will be ready to go on Saturday – albeit in somewhat of a limited role.

“Stephen Carr got more work and it was good, he’s looking more promising for the game in some capacity,” Helton said. “He’s been out multiple games. I don’t see him getting a ton of play. I think it’s leaning towards him being available for Saturday, which is good news.”

There was more good news on the injury front as Chuma Edoga went through the entire practice session with the No. 1 offense at his normal right tackle spot. The junior went to the sideline early on Tuesday, and he remained out for the remainder of practice with ice on his ankle, but he, too, looked to be moving well on Wednesday.

Among those who did not participate in practice were Bubba Bolden (illness), Josh Falo (foot), Porter Gustin (toe – ruled out), Vavae Malepeai (knee), Iman Marshall (knee) and Christian Rector (hand). Both Malepeai and Marshall did, however, work with a trainer off to the side, running and doing various drills. Steven Mitchell (shoulder) did some early work as well, but then exited the field and did not return.

With Gustin sidelined, Jordan Iosefa lined up with the No. 1 defense at the Predator outside linebacker position throughout the entire practice for the second-straight day.

That first-team defense, once again, faced a service squad that featured both Randal Grimes and Dominic Davis at quarterback. The athletic duo has each done their best this week to give Clancy Pendergast’s group a taste of what they might face on Saturday when they go up against Arizona’s star dual-threat quarterback Khalil Tate.

Neither Grimes or Davis were able to break any big plays against the No. 1 unit on Wednesday, but Helton was obviously pleased with the look that they’ve provided this week.

“Grimes has been good, but also having Dominic Davis, a kid back there who runs 10.4, 10.5 both of those kids have done a nice job of giving us a look at that kind of athleticism at the position and that kind of speed,” Helton said. “Randal played some quarterback in high school, did a lot of zone reads, Double D learned it this week (laughing).”

In terms of highlights, Sam Darnold opened up the first 11-on-11 period with a nice shot to Tyler Vaughns along the sideline for a gain of over 20 yards. A little later, however, with Liam Jimmons providing pressure, the redshirt-sophomore quarterback tried to throw a deep pass on the run to tight end Erik Krommenhoek down the seam, but it was underthrown, and safety Matt Lopes was able to pull down the interception at the goal line. Lopes also put a nice hit on Davis in a later 11-on-11 period.

Matt Fink also had a solid session on Wednesday, hitting Joseph Lewis down the sideline for a 35-yard touchdown over Isaiah Langley, and he also connected with Krommenhoek for a long score in a 7-on-7 period.

How does the Arizona offense affect the USC offense?

“With a team that scores a lot of points, the first thing you want to do is start fast offensively. This is an offense with Arizona that is a great ball control offense averaging over 300 rushing yards a game. You want to start fast and hopefully make them uncomfortable, get out of that ball control mode. The second thing I think we want to think about is those situations when you do get in the red zone, especially if it’s going back and forth and field goals might not be good enough. You may have to go for some of those fourth downs depending on how the game is flowing.”

What is it about Iosefa that makes him best suited to slide over to the Predator spot?

“Jordan right now, really on those edge players, because of the zone read possibilities, we’re really trying to get great athletes in change of direction. You know, you can go either way, as far as having Uchenna [Nwosu] on one side, Jordan on the other, as well as two other good athletes in Connor Murphy and Wole Betiku. So, we needed another edge player with Porter being out, and hopefully we’ll be able to hold up there off the edge with those guys.”

You’re from Houston but live in LA now. Who are you going for in the World Series?

“I’ve been going for the Dodgers. You root for where you live. I’m glad to see both teams and it’s been an unbelievable World Series. It’s been hard to game plan every onc in a while when you look over and see what the score is. It’s been a great World Series, Go Dodgers.”

You had the team play dodgeball on Monday?

“You’re sitting there, it’s week 10 without a bye, and our primary goal is to get through the previous tape, to show the positives and show the things we need to correct, and then we come out and get a lather. It was just a good way to get rid of some of the monotony as you go into week 10, and the kids had a blast with it.”