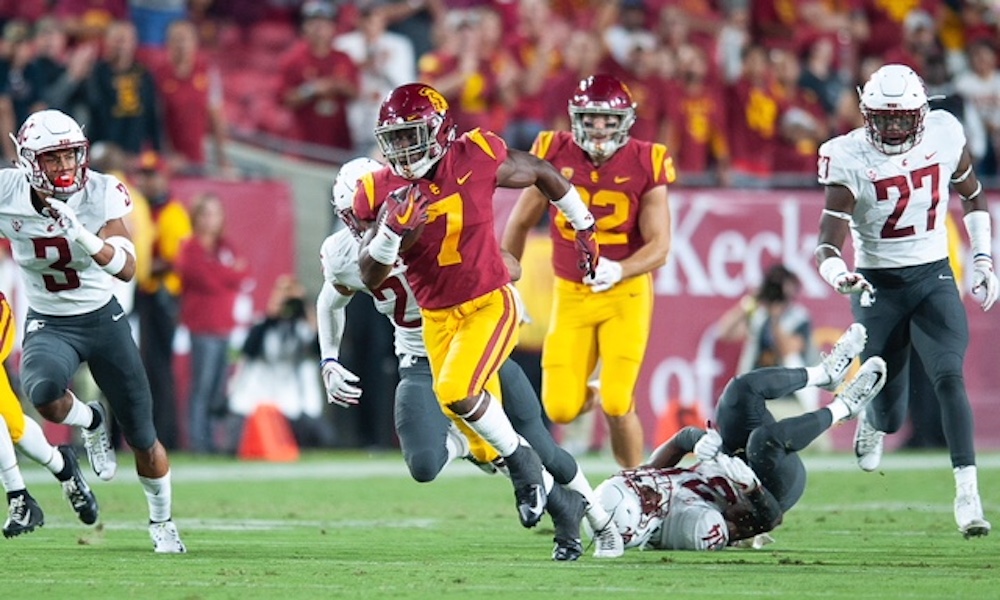 The Trojans got back to work on Tuesday with a full pads practice that had energy coming off the bye week and getting ready for a Saturday showdown with the Colorado Buffaloes at the Coliseum.

The first thing we saw upon entering the practice field was Oluwole Betiku doing sprints under the watchful eye of a trainer, coming from the far end of the field and ending just a few feet away from where we were sitting. It’s the first time in a long time that we’ve seen anything from Wole and it was a quick reminder of what a physical presence he brings. I don’t know what it means about a possible return (he could still play in four games and maintain his redshirt year) but it sure was encouraging to see him out there doing something.

One of the early drills was a WR vs DB one-on-one drill and the best play came from Trevon Sidney with one of his one-handed grabs along the sideline. It’s something he does very well and it’s only a matter of time before it shows up in a game. We also saw good battles between Iman Marshall and Michael Pittman, an interception from Olaijah Griffin, and a couple good grabs from Devon Williams, who continues to show improvement in practice.

While the WR/DB drill was going on, the linemen were doing a pass rush drill, and part of the good energy I mentioned earlier was the vocal level coming from that drill. When the linemen are getting after it it’s usually the sign of a good day.

Next the team moved to Brian Kennedy Field and there was plenty of action that started with J.T. Daniels trying to hit Tyler Vaughns on the outside but Griffin was there to knock the ball away. Daniels came right back to Vaughns on a slant and he evaded the tackle attempt and went for a score. Daniels hit Pittman on a slant for a short gain.

Next came perhaps my favorite sequence of the day when Stephen Carr took a run to the right and Palaie Gaoteote slid over and knocked Carr to the ground with a solid shoulder shot. Carr got up and quickly ran over to give Gaoteote a tap for the nice hit. On the next play Carr went right back to the same side and was able to turn the corner with Palaie trailing and unable to catch Carr as he headed down the sideline.

The next series got started with walk-on QB Brandon Perdue hitting Randal Grimes on a deep touchdown down the middle of the field. Perdue came back to Grimes in the flat but the play went for no gain. Perdue threw another short pass, this time to Devon Williams, but Marvell Tell was there for the big hit and no gain. Carr took a handoff to the right and weaved his way into the secondary before Hunter Echols tracked him down from behind and spun him to the ground. The final two plays of the drill had the same result, J.T. Daniels with a touchdown pass deep down the right side to Amon-Ra. St. Brown against coverage from Chase Williams.

“I’m very impressed with Steven Montez since we saw him two years ago. He’s as good of a decision maker as we have in this league, which is evidenced by him completing 75% of his passes. He’s got a great target in Lauska, and a nice between the tackles runner. There’s a reason they are scoring 39 points per game. Defensively, they run a nice 3-4 that funnels things to their two inside linebackers, who are their leading tacklers”.

Helton on what he learned from bye week self-scouting

“We had some brutally honest self-evaluation. On defense, we need takeaways, those are the things that can change a game and allow you to separate from an opponent. Offensively, we need to be more consistent. We’ve started off strong but we need to be able to finish better when we have the chance to put a game away. To the coordinators I challenged them to stay aggressive and play to win. To the position coaches we need to be critical of poor fundamentals and technique, and get it fixed right away.”

“Bubba is no longer enrolled, wish him nothing but the best, I can’t comment further at this time”

Helton on the need to play a clean game on Saturday

“When you’re playing a 5-0 team who is scoring 39 points per game, every possession counts. We need to keep the ball away from them because they’ve done a good job of wearing teams out in the end”

Helton on status of J.T. Daniels after giving his arm some rest during bye week

“He’s looked good this week. This year will probably be the most balls he’s ever thrown but I think he’s dealt with everything in a phenomenal way. He comes in for training camp, wins the job, has to go to class and figure it all out, and the last two weeks he has no picks, is distributing the ball well, I think he’s throwing the back shoulder ball as well as anybody.”