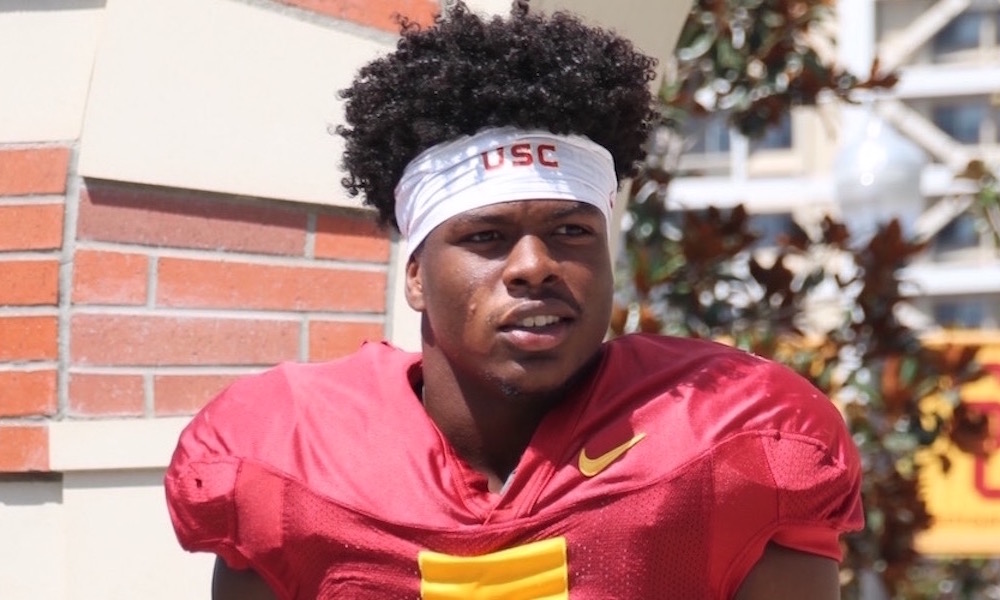 Following a big bounce-back victory over Arizona State, the Trojans were back out on Brian Kennedy-Howard Jones Field on Tuesday preparing for their next opponent, the Arizona Wildcats.

The biggest development to come out of the shorts -shoulder pads- and-helmets session came on the injury front as freshman running back Stephen Carr suited up and took part in a portion of practice for the first time since injuring his ankle against Washington State.

Participating in some early individual drills as well as a late 7-on-7 period, Carr appeared to be moving well, even showing off a nice spin move at one point, and following practice he declared himself 100 percent and said that he believes he is ready to go for this weekend. USC head coach Clay Helton, meanwhile, was much more cautious in his assessment of Carr’s situation.

“Two things, one, let’s see his pain level tomorrow, and two, football shape also has to happen,” Helton said. “He got a lot of great work today, and looked really good. It was good having him back, but we’ll see where he is by the end of the week, and see how many reps he can get. If he looks as good as he did today, obviously he’ll be playing in the game.”

If Carr is able to suit up on Saturday against the Wildcats, Helton acknowledged that he is capable of adding a unique dimension to the offense.

“If you remember early in the season he was so dynamic, not only as a runner but with the things he was able to do out of the backfield, he was actually being targeted with some of our routes when he was out there,” Helton said. “He’s one of those kids who, during his time here, will be an every-down back, a complete back.”

Defensive tackle Josh Fatu (concussion), who made somewhat of a surprise return to action against Arizona State, also suited up and took part in a majority of the practice session.

Not all of the injury news was positive, however, as Helton announced that outside linebacker Porter Gustin has been ruled out for this weekend’s contest due to his toe injury. The Trojans head coach also noted that there is no timetable for his return at this point.

Starting right tackle Chuma Edoga suited up and took part in practice early on, but then went to the trainers’ table where he appeared to get his ankle iced. Clayton Johnston lined up with the No. 1 offense in his place from that point on.

As for the practice itself, in anticipation of facing Arizona’s star dual-threat quarterback Khalil Tate, the No. 1 defense went up against a service squad that featured both Dominic Davis and Randal Grimes at quarterback.

In terms of highlights, Tyler Vaughns made the arguable play-of-the-day during an early one-on-one period on a deep pass down the sideline, leaping over Isaiah Langley – who appeared to be in perfect position for the interception – to bring the ball in for a deep reception.

In the first 11-on-11 period Darnold hit Daniel Imatorbhebhe, Trevon Sidney, Deontay Burnett and Erik Krommenhoek for long touchdown passes. On the final play of the period, however, Jamel Cook stepped in front of a Darnold pass to Krommenhoek to reel in the interception.

Darnold would get back to work in the final 11-on-11 period of the day, connecting with Vaughns and Michael Pittman for long scores. And to end the day, it was Matt Fink hitting Velus Jones for a 40-yard touchdown.

Is Arizona similar to Notre Dame in how they want to attack you?

“You know, they are a run-first offense, they’re averaging over 300 yards per game rushing the ball, and doing a really good job. They don’t have very many schemes but they are good at them. They have a very experienced offensive line, I think the fewest starts that any kid has on their o-line is 15. They’re very well built for what they want to do, credit coach Rodriguez because he’s always taken what he has personnel-wise and leaned on their strengths. You saw what happened when it went from Dawkins at quarterback to what they’re doing now. That’s the sign of a really good coach leaning on his strengths. But they are a run-first offense similar to Notre Dame.”

What do you have to do well on defense to contain Tate?

“The thing that you saw in the Washington State game was linebackers getting out of their gaps. They do such a good job when you’re focused on Khalil and all of a sudden he just bounces it out there to JJ Taylor or Nick Wilson. I think they had 8 plays of over 40 yards in that game so they have a very explosive offense. When I turned on the tape I thought it was going to be only run game but he’s really being accurate downfield, he’s dropping dimes to those receivers. Anytime you can make the defense come up with the run game and then hit some deep balls, man that makes for a hard day. We’re going to have to hold up outside when we are in man, and don’t take the bait. Do your assignment and count on the man next to you to do his.”