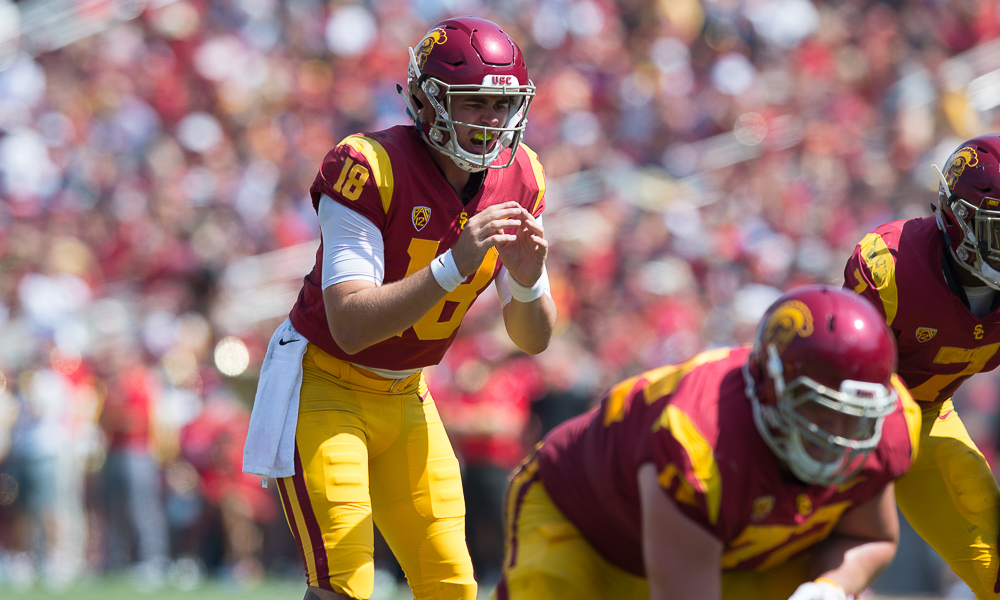 It was a usual shorts and shoulder pads practice for a Wednesday but, according to Clay Helton, there will be a variation to the practice schedule next week.

“It will not be a no-pads November,” according to Helton. “We will be sticking with full pads each Tuesday, the seniors came to me and said they wanted to continue going full pads on those days and we will do that.”

There continued to be good news on getting injured players back today, particularly with the signal-callers on each side of the ball with Cameron Smith and J.T. Daniels.

“I felt like I wasn’t there for my guys,” said Smith. “Not that I could have made a difference but just not being there for them was tough.”

USC defensive coordinator Clancy Pendergast said there were times he looked out at the defense against ASU and saw “6-7” freshmen out there, including Palaie Gaoteote, who will stay at MLB even with Smith back in the line-up.

“We aren’t going to move Palaie to another spot now that Cameron is back,” Clancy said. “He will stay there, that is his spot. We’ve got other guys moving around too like Ajene.”

“EA (Palaie) did great but Cam has so much experience, he’s like a security blanket back there, he recognizes so much.”

It’s also been two days in a row that we’ve seen Daniels back on the practice field and Helton has said that he will start now that he’s been cleared, and the USC coach said one thing is clear now that that J.T. is back on the field.

“His arm is fresh, that’s for sure,” Helton said. “He’s very business-like, very serious. Both QB’s looked solid.” Helton said in reference to Jack Sears, who got his share of reps the last two days.

There was the weekly good competition between Biggie Marshall and Michael Pittman in the WR/DB early drills, and Helton said he liked the way Olaijah Griffin and Devon Williams have begun to mirror those one-on-one battles, and today we saw Amon-Ra St. Brown with one of the best receiver rep of the days.

And, of course, it’s also been our first look this week at Tim Drevno working back with the offensive line, along with help from former GA Mike Goff, a 12-year NFL veteran who will take the place of Neil Callaway as the 10th coach and will be able to work with the OL at practice and in games.

“I had the chance to work with Tim in 2014 and saw what kind of coach he was, the attention to detail he puts into his work,” Helton said. “I’ve instructed him and Mike to focus on technique and fundamentals, to have those extra set of eyes working with our younger guys, and the other days, to help them benefit.”

Just from judging on the first couple days there seems to be a lot more communication going on between Drevno and the linemen than we had seen in the past.