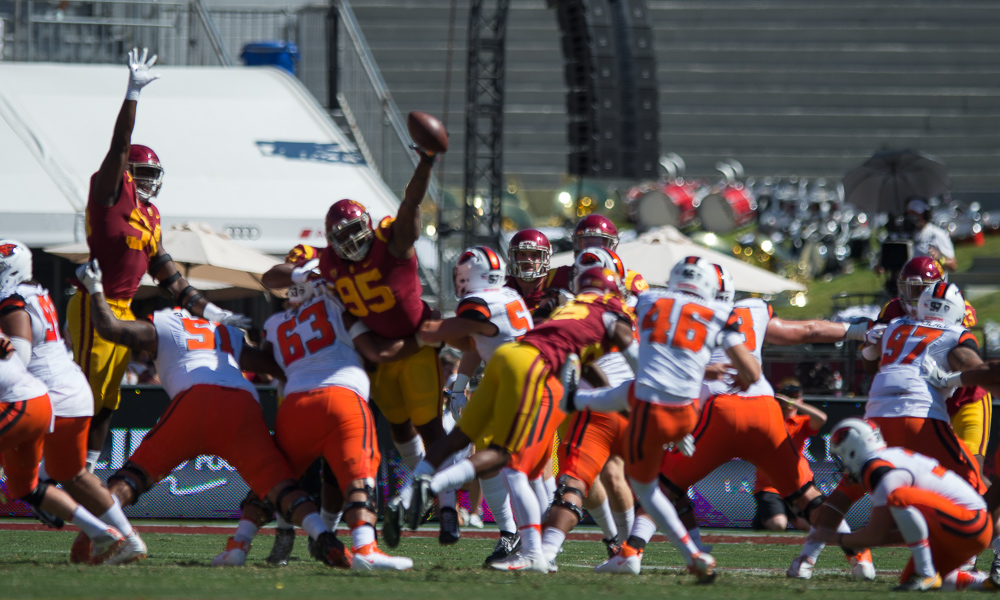 The Trojans held a full pads practice today in preparation for the annual rivalry game with the Notre Dame Irish on Saturday.

The loudspeakers on Brian Kennedy-Howard Jones Field were cranking the Irish music from Dropkick Murphy’s and there was an encouraging sight early in the day when Chuma Edoga was lined up at his normal RT spot for warm-up drills. Chuma has not played since early in the Washington State game due to an ankle injury, and he didn’t take part again today after warm-ups until the final team drill, but it was good to see him getting some work. One of the key stats that Clay Helton emphasized after practice is the fact that the Irish have only given up one rushing touchdown on the year so the return of a veteran like Edoga would be welcomed.

On the opposite end of the OL, however, Toa Lobendahn was missing with a pec strain, so we saw Austin Jackson take reps there all day. That will definitely be a situation to watch as the week goes along.

In other injury related news, Brandon Pili went with the 1’s at nose tackle as Josh Fatu is out after being involved in an auto accident (not his fault, according to Helton) but Josh is going through concussion protocol and is listed as day-to-day.

Porter Gustin was spotted at practice, not dressed in uniform and with a boot on his right foot, but Helton said Porter is chomping at the bit to play and will have MRI and Cat scan on both injuries, Helton will provide updates after the Wednesday practice.

Stephen Carr was also held again today with the foot injury that has kept him out of action since WSU.

Helton also announced that Kenny Bigelow will be stepping away from the “football aspect” in order to focus on his goal of being a coach. Bigelow was at practice today but after two knee surgeries in his football career he is looking at this change as a permanent one.

“That’s what his aspirations are after football, to be a coach,” Helton said. “So, he’s going to mentor some young kids for us, and be around this team in a different role. I credit him for all he’s done here, and how he’s helping us now. I love him to death.”

The final memory for me of Kenny was the look of joy on his face after the Oregon State game when we did a video interview with him and he talked about getting a blocked kick in that game. It’s no secret that his career didn’t go as planned for the former 5-star recruit but at that moment he seemed genuinely happy with being able to contribute. Good luck in your new role Kenny.

There had been rumors and speculation about Jamel Cook in recent weeks after an extended absence due to bronchitis but Jamel was back in action at corner today and worked as the 2nd unit corner lined up on the right side of the defense.

Daniel Imatorbhebhe was able to go, including full participation in a one-on-one blocking drill, a good sign to have his workload increase for Saturday.

Jordan Iosefa got a lot of work at MLB, and we also saw Jalen Greene in action on the offensive side of the ball. Good to see both guys back after their collision during Washington State pre-game.

Sam Darnold was sharp, and I thought his best throw was one where he wound up and hummed a strike down the middle to Tyler Vaughns for a 30-yard score. He also had touchdowns to Trevon Sidney and Deontay Burnett. Matt Fink had a pretty TD pass to Josh Falo.

During the final drill we saw a lot of younger linemen get some action mixed in with the starters, including Jalen McKenzie, Alijah Vera-Tucker and Jay Tufele.

“It’s special, there’s nothing like this rivalry. I remember going back for my first game there, it was pouring rain, the Notre Dame fans sitting next to us were super cool, sharing their umbrella. I remember watching the Bush Push game, that was crazy. To get to live out the dream I had as a kid by playing in this game, nothing like it.”

“We will adjust our schedule coming in a day early. We’ve moved our Thursday practice on campus to the morning, and then we’ll fly out immediately after that. We’ll stay in Michigan City and practice Friday at a HS close to there, we won’t do a walk-through at Notre Dame Stadium.”

“Run game for Notre Dame starts with the running back Adams, and the DL front jumps off the film. They’ve rushed for 23 TD’s and only given up 1 rushing TD, that shows their focus.”

“A USC vs Notre Dame game in South Bend is a bucket list item for many people. It’s why you come to these schools, it’s why you play the game. Somebody asked me the other day, ‘what’s it mean to you to be able to be a part of this?’ I mean, this is what dreams are made of. You grow up hoping to be at USC, and getting to play Notre Dame, and just being a part of that is special. You know, this has been a game that’s been played over 90 years. It’s 22 national championships, it’s just a legacy, it’s a tradition. You’re making history when you win this game. We have a board on both sides of our team room, one with the shillelagh and one with the victory bell, and you understand when you come to SC how important that is to our fans, to our university and to our team. And to be able to put that year up there, whether it’s 2016…whatever it might be, you know, to be able to put that year up and say, ‘hey, I was a part of that team. I got to be a part of that football family, and be a part of that victory.’ Man, that’s special. That goes on forever.”