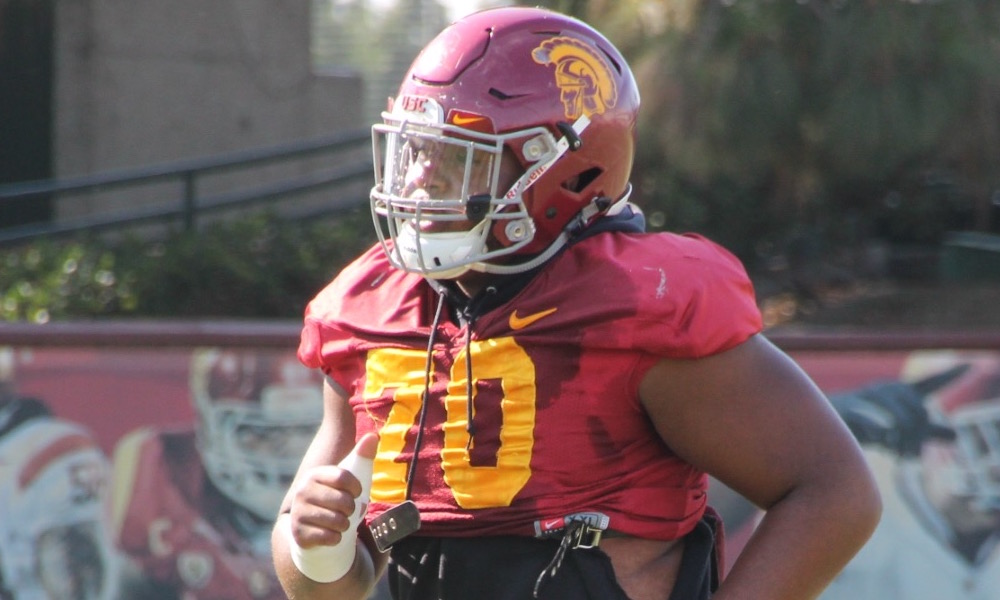 With a tough Utah team on tap for this weekend, the Trojans were back out on Brian Kennedy-Howard Jones Field on Wednesday, and for the second consecutive day there was more positive news on the injury front.

Chume Edoga was back in action for the first time since suffering a high ankle sprain against Washington State. The big right tackle spent a majority of the practice running with the No. 1 unit, moving well throughout the two-hour, full-pads session.

“Chuma was out here today, and got a lot of work,” said USC head coach Clay Helton. “He actually looked better than I thought he would.”

Edoga took the final 11-on-11 period of the day off, at which point in time Clayton Johnston and Austin Jackson rotated in at that right tackle spot, just as they did against Oregon State.

Also on the offensive side of the ball, Daniel Imatorbhebhe was back in pads for the second straight day, getting even more work in than he did one day earlier. The redshirt-sophomore tight end has been hampered by a hip injury since the summer, but he has looked solid in practice for the past two days, and Helton is not ruling him out for this weekend.

“I’m going to listen to the doctors,” Helton said. “The ultimate goal was to have him back by Notre Dame. He’s ahead of schedule and feeling good right now. As we get to Thursday and Friday we’ll listen to the doctors and, more importantly, listen to him, see where he is. I know he’s put a lot of work into this and he wants to play in this game. He’s got a lot of game experience, he’s a tremendous run blocker, and you’ve seen him as a threat in the passing game last year. Really, he’s getting back into football shape, he was doing pretty well last week and then to have this week really helped. There’s a difference between running straight and having to do actual football movements, and getting through that soreness. He’s doing a good job with that, he’s working hard.”

And there were others who returned to action on Wednesday as well. Jamel Cook (illness), Jalen Greene (concussion) and Jordan Iosefa (concussion) were all full participants. Cook spent the bulk of the day at wide receiver with scout team offense.

Wide receiver Deontay Burnett did not participate in Wednesday’s session due to toe and shoulder injuries, but Helton said that he was given the day off as a precautionary measure.

“We held Deontay today to get him a little bit fresher with that sore shoulder, sore toe,” Helton said. “He had a good day of work yesterday so get him fresh today.”

Defensive linemen Malik Dorton, Josh Fatu and Rasheem Green had a lighter-than-usual day, once again, with all three players getting the final period off.

As far as the practice session itself, it was highlighted by a spirited final 11-on-11 period that, for a short time, featured the No. 1 offense going up against the No. 1 defense – all in an effort to get USC’s offense ready for Utah’s vaunted pass-rush.

“It’s one of those “iron sharpens iron” drills that we talk about, to get the goods going against the goods.” Helton said. “They apply a lot of pressure both on 3rd down and in the red zone. I wanted those tackles to see a great pass rusher like Uchenna [Nwosu].”

Nwosu and Co. didn’t have much of an impact on Sam Darnold and the offense, however, as the redshirt-sophomore passer put on an impressive display in that final period, completing 7 of 8 pass attempts, although some of those were against the No. 2 unit. Darnold’s one incomplete pass was actually batted down at the line by Connor Murphy.

During an earlier 7-on-7 period, Darnold connected on a deep 45-yard touchdown bomb to Michael Pittman Jr. He did throw one interception as well, with Jack Jones pulling down a pass that had been tipped in the air by Tyler Vaughns, and returning it for a touchdown.

Jack Sears ended practice with a 35-yard touchdown pass to Keyshawn “Pie” Young, who made a leaping grab over Isaiah Langley.

Among those in attendance on Wednesday were former Trojans players Shaun Cody and John Mazur.

Is it a unique challenge to prepare for two quarterbacks in Tyler Huntley and Troy Williams?

“They are similar in that they’re both athletic. Troy is a kid who does keep his eyes downfield so he’s more of a thrower but they do use his ability to escape in the pocket and in the run game. Huntley is a kid who will take it down and go, he can create with his legs in the passing game, we’ve seen it numerous times.”

What is the thought process behind playing Randal Grimes now?

Do you ever worry about turnovers becoming a psychological hiccup with Darnold?

“No, not at all. What I always say about Sam, what I appreciate, he’s one of those guys whether it was a good play or bad, he’s like a pitcher, that moment is gone and he’s on to the next one. I think that’s one of the great things about him. A great example is when the ball slipped out of his hands, it’s gonna happen to every quarterback at some point, and he comes back with a long drive, that’s the mark of a good football player.”