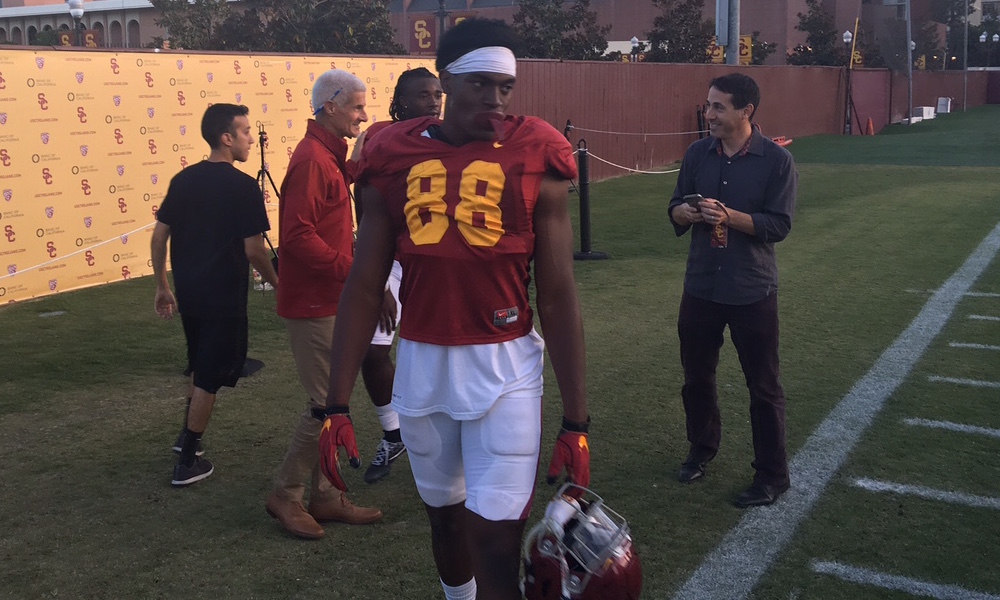 There was more injury news for the Trojans as they prepare for an important Pac-12 South match-up with the Utah Utes as Clay Helton announced that freshman defensive tackle Marlon Tuipulotu underwent back surgery today and is out for the remainder of the season.

That’s a blow to the USC interior d-line as Tuipulotu had been able to make a consistent contribution through the first three games of the season. If there is a bright side it’s that Tuipulotu suffered the injury prior to the redshirt cutoff date, according to Helton, so he will be able to redshirt this year.

There was some very encouraging news on the injury front with Daniel Imatorbhebhe as Daniel was able to get in some extended work today, including taking part in a one-on-one blocking drill that definitely had a physical element to it, and first team reps at TE during the early non-contact service team period.

“Injury-wise, Porter Gustin is still out with a toe and bicep,” Helton said. “Jordan Iosefa is still going through concussion protocol. Chuma Edoga is working through the ankle injury. We’ll work him a little bit tomorrow, and see where he’s at. Stephen Carr is still out with a foot. Daniel Imatorbhebhe actually got some practice today. He looked good. We’ll see about the soreness coming back tomorrow. Really working to get him back in football shape. Jalen Greene is out with a concussion. And then there were two surgeries today – Viane [Talamaivao] had a very successful surgery on his pectoral muscle. We wish him a speedy recovery. And unfortunately, Marlon Tuipulotu had to have season-ending back surgery today, so he will be out for the rest of the season. He was four games or under so he can get his redshirt year back.”

With Marlon out, and with Josh Fatu, Rasheem Green, Kenny Bigelow and Malik Dorton all out or limited, we saw Brandon Pili and Liam Jimmons as the first unit interior d-linemen for much of the day. For the 2nd unit defense we saw Juliano Falaniko getting the bulk of the 2nd team reps behind Uchenna Nwosu.

Jamel Cook was not at practice, but he was spotted on the sidelines at the Coliseum on Saturday, as there have been some rumors about his status during the extended absence for bronchitis. And with Damon Johnson out we saw Wyatt Schmidt as the long snapper for special teams.

Helton said the players are well aware of the implications that come with this game in terms of conference standings and having a leg up on winning the South and competing in the Pac-12 title game, especially with how things played out in Salt Lake City last year.

“We know that this is the game that held us out of playing for a Pac-12 title, and to lose that in the last 16 seconds was heart breaking for our football team, but I thought really set the tone for the rest of the season,” Helton said. “It was Sam’s first game, his first loss, and how he came back from that I thought was very impressive.

“Everybody knows where we sit this year. It’s a game that is imperative for our future as far as the Pac-12, and we know this is between ourselves and Utah. We always seem to be up at the top, and we’re always battling for first place. And Utah has done a great job under Kyle [Whittingham] for several years now, and it’s become one of the games that, I think Utah has been in the league for eight years, but this has really become a nice rivalry football game in the south also. It reminds me of a Stanford ball game, just the physicality of it when you play their team. And with this defensive front it will be a very physical game.

As far as practice action today, the play of the day came from Tyler Vaughns during a one-on-one WR/DB drill. He was being covered by Jackie Jones on a go route down the sideline, the ball was put up high and Tyler went up with one hand to come down with the catch as Jackie was all over him.

Jackie was able to come back later in the day to break up a pass across the middle for Tyler. There was also a pass to Vaughns at the goal line from Sam, it would have been a terrific play as Tyler extended himself but was unable to make the play, and with the way he’s been catching the ball it was almost a surprise that he didn’t bring it in.

Grant Moore had good defense to break up a pass for Josh Falo. Tyler Petite caught a ball over the middle against C.J. Pollard. Isaiah Langley had a pick off a Matt Fink pass, Randal Grimes stopped short of the play to prevent a collision, and he probably goes for the ball in a game situation. Grimes came right back to make a nice grab of a high thrown ball along the right sideline and was pushed out of bounds by Dominic Davis. Jake Russell also had a nice catch of a ball that was a little high from Jack Sears. Vavae Malepeai had a pretty run down the left sideline, when he gets up a head of steam he is really moving. Jay Godfrey had a pass break-up against Vaughns, we haven’t seen much from Jay as he recovers from the knee injury at the end of last year but that was a nice play. The day ended with a Fink touchdown pass to Jack Webster.

“Yeah, the fact that we lost to Utah last year does leave a little taste that means something for this year. It’s well documented that they were my first offer and I have a lot of respect for Coach Whittingham but I haven’t beaten them yet” – Sam Darnold

Can Ronald Jones II take on a bigger role in this game?

You know, he’d fought through an ankle last game. He was very consistent during the game, averaging 6.6 a carry, but we got what we could out of him. We rested him on Monday. He got limited work today, and hopefully through the rest of the week. We’ll try to get him to the game, and hopefully he’ll feel even better than last week.

Darnold said that the coaches talked to him about his remarks after the game on Saturday?

I visit with Sam every Monday, and it was a nice discussion, and I’ll leave that between coach and player. And like I said earlier, we have great players, great coaches, and they’re doing a wonderful job together.

Darnold said that he apologized for his comments?

He didn’t apologize to me. He’s a wonderful person. He’s a kid that, in my impression, like I said earlier with our coaches and our players, we all have very, very high standards. And when you’re basically putting up 36 points a game and 470 yards, and you still want more, that’s pretty good by your players and your coaches. And he’s a young man where I know it was taken a little bit out of context, and he’s always been a kid that owns up to everything, and that’s why I love him for it. He’s tremendous.