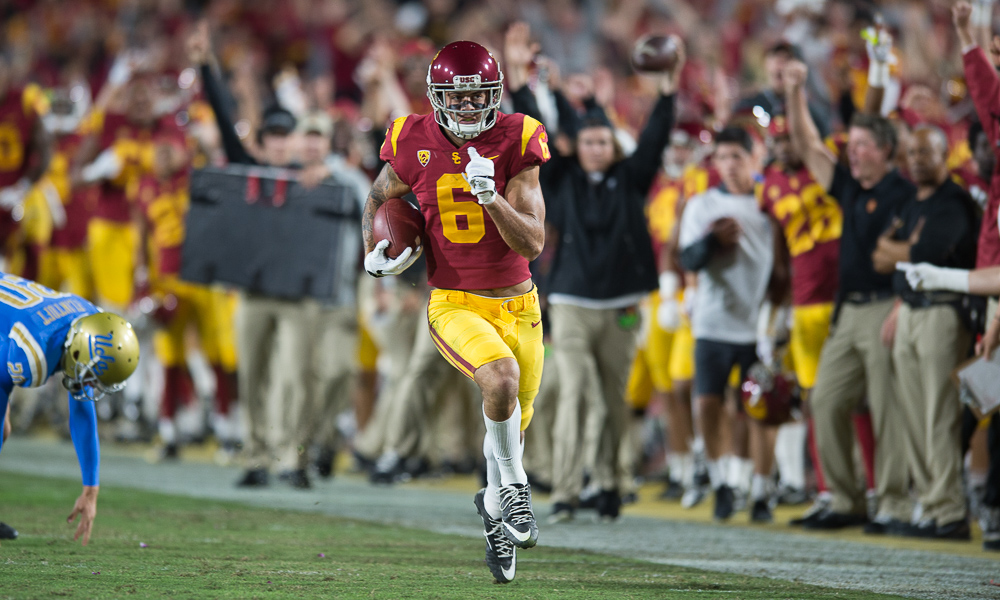 The Trojans were in shorts and shoulder pads today for the Wednesday practice that featured a lot of emphasis on third down planning on both sides of the ball.

“They do a lot of good things to stay on the field,” USC coach Clay Helton said. “Their quarterback Montez is very strong, he can escape and create and find his receivers downfield. And a big part of that is how they disguise Chenault and make him hard to find, they even line him up in the wildcat and that’s something that we haven’t really seen this year. It will be imperative for us to make plays in the red zone against their aggressive secondary, I thought Pitt (Michael Pittman) did a really good job of that last year.”

One of the early drills we saw today featured the WR’s and DB’s going one-on-one from the 30, then the 20, then the 10, with the balls being thrown into the end zone. Some of the highlights included Pittman with an impressive one-handed grab of a ball the high point against coverage from Greg Johnson, a back shoulder throw to Josh Imatorbhebhe where Iman Marshall read the play well and beat Josh to the ball for the pick, Tyler Vaughns with a low grab after Olaijah Griffin went for the pick and missed in the front corner of the end zone, Imatorbhebhe using his body to shield Johnson and make the catch for a touchdown, and Griffin tipping the ball at the goal line but Amon-Ra St. Brown coming down with it for the score.

There was a ton of work on special teams today, you can never say that the Trojans shortchange this area when it comes to practice time.

In the final team period we saw Talanoa Hufanga get an interception off Matt Fink, but Fink later hit Imatorbhebhe for a long score, and the final play was some trickeration that we cannot repeat what we saw.

Helton on Cam Smith “Cam has dealt with hamstring issues before and a little rest usually works for him. EA (Palaie) got some extended reps during the bye and has really come on, we could also use Reuben Peters and Jordan Iosefa if we need to”

Helton on Porter Gustin “We’ll see where he’s at tomorrow, he’s always pushing himself. I’m not sure he could have played last week so he really benefited from the bye”

Yesterday we talked about how Oluwole Betiku was doing early sprints and today it was Jay Tufele, Solomon Tuliaupupu and Raymond Scott. I was most encouraged to see Solomon running without any real sign of a limp, would love to see him be able to take part in some games down the stretch without losing that redshirt year.

“They do a good job of spreading the ball around to different guys and Montez can make all the throws. He’s matured a lot since we’ve seen him the last two years and they’ve given him more and more responsibility.”

“They do a nice job of covering him up by moving him around to different spots. He’s a really good run-after-catch guy, in fact a lot of their guys are. We need to take good angles and wrap up. And they always have some kind of new wrinkle or trick play so we need to be aware of that.”

Talanoa Hufanga on what he is doing well so far

“I don’t know, I think I need to improve on everything, that would be for my coaches to answer”