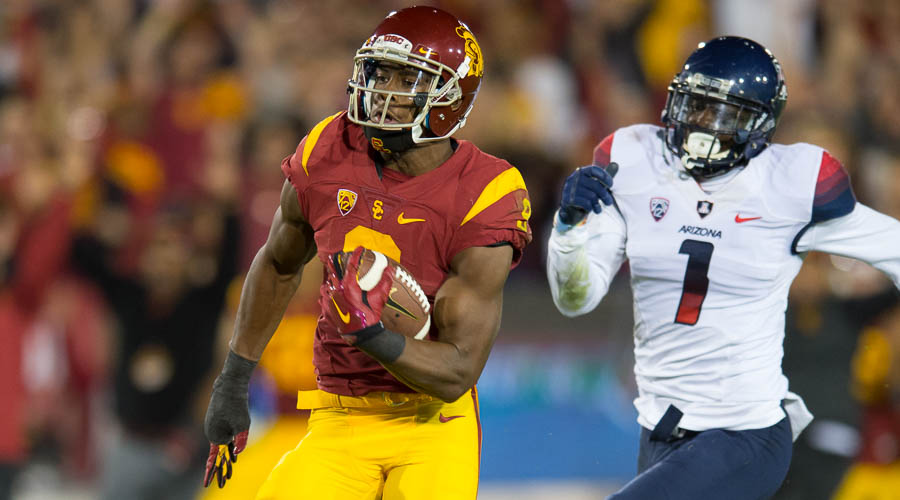 For the fourth consecutive week USC fought back from an early deficit to come away with a victory, as the Trojans defeated Colorado 27-24 in a closer-than-expected Friday night matchup in Boulder.

After a promising opening drive that resulted in an Alex Wood field goal, the Trojans struggled in all three phases of the game throughout a majority of the first half.

The Buffaloes took their first lead of the contest mid-way through the first quarter when Phillip Lindsay scored on a four-yard touchdown run to put Colorado in front 7-3.

The Buffaloes lost starting quarterback Sefo Liufau to an apparent leg injury at the end of the first quarter, but Colorado was able to maintain its momentum for a short time with backup Cade Apsay at the helm. The redshirt-freshman signal-caller, who completed 18 of 23 passes on the night for 128 yards, hit Nelson Spruce (7 Rec, 94 Yds, 1 TD) with a nine-yard touchdown strike to give Mike MacIntyre’s team a 14-3 lead. The touchdown drive was set up by Jared Bell’s interception on a pass thrown by USC quarterback Cody Kessler

Both teams added second-quarter field goals, and a lethargic looking Trojans team went into the locker room at the half trailing 17-6.

But a very different looking USC squad came out in the second half, and the Trojans took command of the game in a hurry. Key to the turnaround was a relentless effort by the USC defense, which compiled six total sacks on the night, as well as a much crisper looking offensive group.

Kessler and the USC offense put together a beautiful 13-play 83-yard drive on the Trojans’ first possession of the half that was capped by a four-yard touchdown toss from Kessler to Jahleel Pinner.

On Colorado’s very next drive, Delvon Simmons knifed into the backfield and forced Christian Powell to fumble, with Antwaun Woods coming up with the recovery. The Trojans converted the Buffaloes mistake into seven points on the ensuing drive as Kessler hit Taylor McNamara in the back of the endzone for a two-yard touchdown, and all of a sudden USC was in front 20-17.

Then, even on what was a very off-night for the Trojans special teams, it was Johnny Nansen’s group that came up with a huge play as Adoree’ Jackson blocked a Colorado field goal attempt and returned it 16 yards to the Buffaloes 36-yard-line.

One-play later Kessler hit JuJu Smith-Schuster for a 36-yard touchdown, and USC had a 27-17 lead early in the fourth quarter.

Kessler finished the night having completed 17 of 27 passes for 204 yards and three touchdowns with one interception, while Smith-Schuster had three catches for 66 yards to go along with his touchdown.

The Buffaloes made it interesting near the end, with Spruce returning a punt 45 yards to the USC four-yard-line, and then Apsay connecting with George Frazier for a one-yard touchdown pass two plays later to make it a 27-24 game.

The USC defense stepped up when it had to down the stretch, however, and USC was able to run the clock out down the stretch with running backs Ronald Jones II (19 Rush, 62 Yds) and Justin Davis (14 Rush, 89 Yds).

Down 11 points at the break, The Trojans’ Friday night victory marked the first time that a USC team overcome double-digit halftime deficit since 2005, when Pete Carroll’s team fought back from a 21-3 deficit against Arizona State.