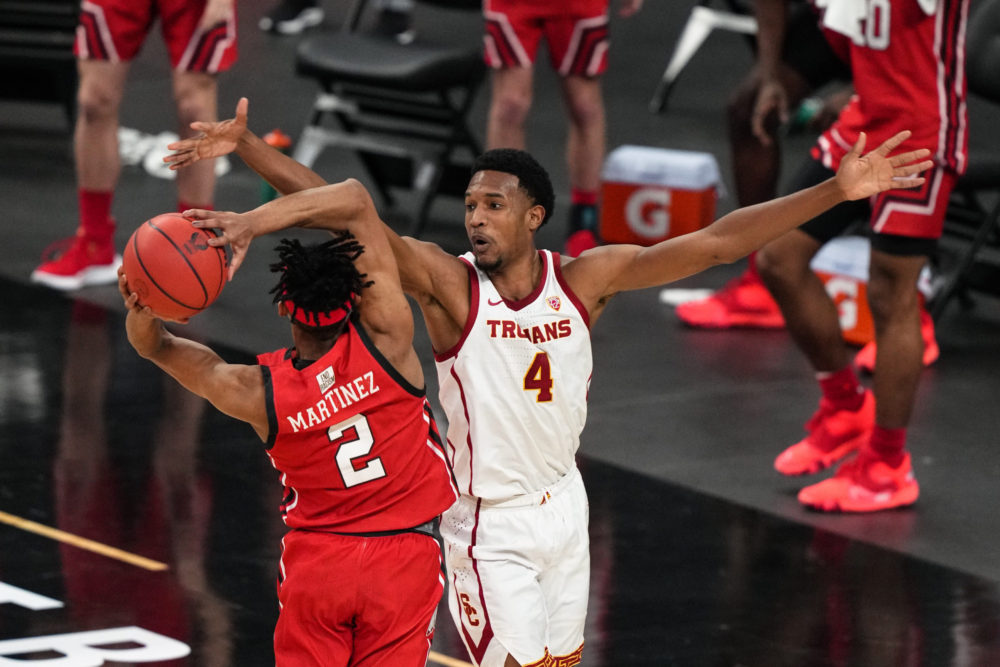 Trojans Win War Of Attrition In Double OT, Plus Other LV News

There were times Thursday night when it felt as if the game might never end, but the Trojans finally pulled it out 91-85 and are now 22-6 on the season. The Trojans had an opportunity to win in regulation but a late Utah three chopped the lead to two. After Ethan Anderson missed two free throws he committed a foul with 2.3 seconds left which allowed the Utes to tie it up.

In the first overtime the Trojans only made one shot from the floor but were 7-8 from the line. Utah tied it at 80 with 30 seconds left and the Trojans played for the final shot. Tahj Eaddy had the ball the entire possession and probably started his move a couple seconds late. He wound up having to take an off balance layup.

The second overtime was all Evan Mobley. He started the period with a baseline fifteen footer and followed with a dunk. He made one of two free throws on the next possession and made a final layup.

By the time this one was finally over four Utes had fouled out along with Isaiah White. Many of the late fouls were called on defenders trying to stop Evan. He knew the defenders guarding him had foul trouble and he said he wanted to force the Utah bigs to foul or allow him to get a good shot. Utah played Evan mostly one on one and as the game went on he looked for his opportunities.

Coach Enfield said he was very calm all night except when Evan was called for charging on what Enfield thought was a missed call with 13 minutes left in the first half. It was Evan’s second foul and he sat the rest of the half. Enfield didn’t want the players to see him get too animated as the game went back and forth and the team followed his lead and played under control until it was finally over.

The Second Half And The Overtimes Were A Rollercoaster

At the 12:24 mark in regulation the Trojans led 51-41 and had made 11 straight foul shots. It looked like they would coast to a win. They didn’t miss their first free throw until only 7:09 was left in regulation. The Utes hung in all night and at the five minute mark the lead was down to 59-56. The Trojan margin went up and down from five to one until it was 69-67 with 26 seconds left. On the inbound play Ethan was fouled and missed both foul shots opening the door. Ethan then committed the late foul which led to overtime.

Isaiah White and three Utes had fouled out before the first OT period was over. In the overtime Evan made 5-6 free throws and USC led 78-77 with 1:09 left. Ethan made two free throws and the lead was three with 51 seconds remaining. After a Utah three, the Trojans had the ball with 30 seconds but Tahj did not get a good shot.

USC finally put the game away in the second overtime behind Evan.

The Stats Were Pretty Even

Isaiah Mobley had a very unusual statistical game. He was 4-4 from the line at one point and he made two threes in two attempts. He finished 5-6 from the line. The threes were his only made shots and he finished the game 2-4 with 11 points.

Isaiah White played very well defensively on the Utes’ all conference forward Timmy Allen. White finished with 14 points on 6-10 shots including one made three. Enfield said that Isaiah’s back is not 100% and added that he still played “a great game.” Drew Peterson finished with 13 points including 6-8 from the line and Ethan Anderson scored 10.

Timmy Allen scored 20 points but it took 17 shots, thanks in large measure to the defense of Isaiah White. The Utes best outside threat Alfonso Plummer made a few early shots and a big late three, but was quiet in between. He was held to 16 points on 6-15 from the floor. Utah’s best big man Braden Carlson scored only six points on 3-9 shots and was hounded by the Mobley brothers and Chevez Goodwin.

The Trojans Controlled The Paint

USC outscored the Utes 38-26 in the paint and Evan blocked 5 shots and altered several others.

Enfield said that “Evan showed his whole repertoire” in this game and added that Evan was very aggressive and had only one turnover. The coach also said that “Chevez gave a ton of energy when Evan went to the bench” in the first half. He also called out the very good free throw shooting by both Mobleys.

As expected in a double overtime game several Trojans played big minutes. Isaiah Mobley played 46 minutes, Tahj 44, Drew 42, and Evan 37. Evan’s minutes were fewer due to the two early fouls. Ironically he didn’t commit another foul while Isaiah and Chevez both played with four.

Ethan played 31 minutes and Isaiah White 25. As Enfield noted: “Our guys will play big minutes tomorrow so they better be ready.”

USC Knows What To Expect Against Colorado

Enfield said that McKinley Wright is the best play making guard in the league. He added that CU has good three point shooters and physical bigs. Enfield noted that the Trojans had trouble scoring late in both of the losses to the Buffs. Evan added that in both games CU played the gaps defensively against and he expects they will again.

After the game in Boulder, Enfield said the Trojans might play more zone if they meet again. He’ll get that opportunity tomorrow.

This was a game that likely left fans of both teams emotionally drained. The Trojans missed so many opportunities to wrap the game up that I feared that Utah might have one late chance and pull off the upset. Fortunately Evan and his teammates wouldn’t let that happen. If there is any benefit from playing a very long game it means that the Colorado- Cal winner won’t get to bed until Friday morning.

Tidbits From The UCLA Loss, Their Fourth In A Row

If the old adage to finish strong is meaningful the Bruins get an “F”. They led the entire game until the Beavs got their first lead in OT. They now wait for Sunday having lost to Colorado, Oregon, USC and Oregon State in their final four games. The loss to the Beavs will likely hurt them the most.

Mick Cronin looked like Minnie Me compared to Wayne Tinkle. They both wore black long sleeve shirts and grey slacks. Tinkle is more than a foot taller and must weigh 75+ pounds more.

There were more OSU family members here than UCLA family. At one point Tinkle seemed to forget the circumstances and with his back to the “crowd” was waving his arms for the fans to get louder. Tinkle’s daughter was the loudest family member at any game in the first two days. If you’ve seen her at Galen you know how loud and obnoxious she can be.