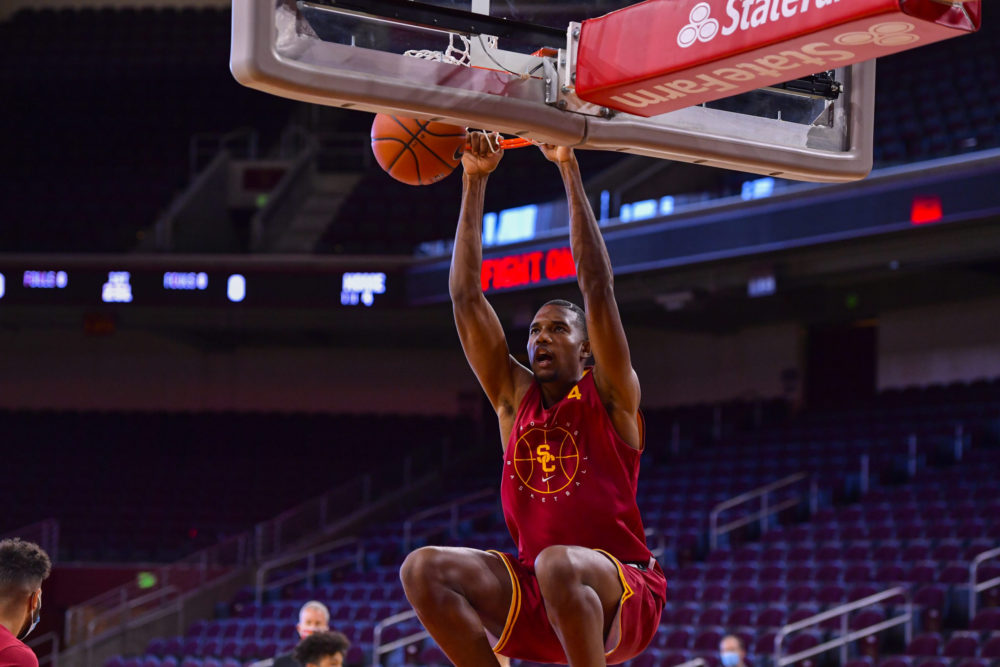 Last week the Trojans were expected to play three games but only played two because Stanford did not have rapid Covid testing on-site away from Palo Alto. One Trojan player had what proved to be a false positive test and the decision to postpone the game came very near the scheduled tip-off.

For a very short time it appeared the Trojans might play three games this week until Stanford refused to reschedule the game from Thursday of last week to Monday of this week. Rather than accommodate both teams’ schedules Stanford opted to nix the makeup game on Monday because they were missing three starters. Right now they may be on the Tournament bubble and they want to give themselves the best opportunity to beat the Trojans.

I have no problem with that decision; I would have wanted USC to take the same course if the positions were reversed. As a result we learned after the Cal game that there will not be three Trojan games this week and USC and Stanford will need to find an alternative date or perhaps cancel the game. The first game against the Cardinal was postponed from December due to Covid issues and is now scheduled to be played at Galen on Tuesday February 2, which is a good date from the Trojans’ perspective. They are only scheduled to play UCLA that week on the following Saturday.

Tuesday it was announced that Oregon has Covid issues and the Ducks’ games on Thursday at Pauley and Saturday at Galen have been postponed. In this wacky season when things change rapidly the Trojans will now only play the Beavers this week on Thursday afternoon.

The Beavers Are Playing Their Best Basketball Of The Season

OSU is riding a three game conference win streak. The Beavs beat ASU on a last second layup, beat the Trojans by two when USC could not convert on the final possession, and beat a Covid-depleted Oregon team last Saturday by 11. The Beavers are now back in the conference race with a record of 4-3. Seven conference teams have three or less losses. It seems unlikely that OSU is a real contender for the conference regular season title or a first round Pac 12 bye, but the Beaver players and coaches undoubtedly believe they have climbed back into the race.

On the other side the Trojans have struggled in the last two weeks more than earlier in the season. Still, USC has a NET ranking of 24 and are projected as a sixth seed in the latest Lunardi bracketology. The Trojans are 12-3 overall and 6-2. UCLA is 8-1 and the rivals will play twice in the coming weeks. The only other team with two conference losses is Oregon but the Ducks have played only six conference games and are missing two more this week.

In the OSU win over Oregon Ethan Thompson had 19 points, Warith Alatise had a big double double with 14 points and 16 rebounds and Jared Lucas contributed 13 points. The Beavs dominated the boards against the smaller Ducks by a margin of 19.

Last week I provided a full OSU preview and will update that preview here. Senior Thompson is their leader and averages 16 points and 3.8 assists, both tops on the team. If it is a close game the ball will be in his hands to create for himself or find a teammate for a good shot.

Alatise leads the team with 8 1/2 rebounds a game and averages 9 points. Senior guard Zach Reichile is steady and a good catch and shoot player from beyond the three point arc. He  averages 8.7 points and 3.8 assists.

What The Trojans Need To Do To Win

The most obvious change USC needs to make is to play much better defense inside against the big body of Roman Silva. He made 6-7 shots last week against the Trojans. To put that in perspective, on the season Silva averages 9 1/2 minutes and 3.4 points a game. He has made 20 of his 30 shots over the entire the season. The Trojans made a minor role player into a one night star. That can’t happen again.

Isaiah Mobley and Chevez Goodwin were responsible for Silva in the Trojan man defense and Silva overpowered them both. USC might try Evan Mobley on Silva; Evan would giveup a lot of weight but has a much greater ability to effect an inside player’s shot than any other Trojan. If Enfield chooses to stick with Isaiah and Chevez on Silva we should expect to see USC double team if Silva makes a shot or two.

The difference between how aggressively Evan attacked the Cal defense compared to how he played against the Beavs was striking. There is no doubt that the coaching staff has shown Evan film from the two games and impressed upon Evan that he needs to consistently be a bigger factor on the offensive end than last week in Corvallis. If he attacks he will score and also attract fouls and create foul problems for Silva and Alatise.  Evan’s confidence on offense against Cal was obvious and spilled over to the free throw line. The Trojans are much harder to defend when Evan is aggressive with the ball.

Look for Ethan Anderson to play more minutes than he played against the Beavs last week. He should be much closer to fully back and he makes a huge difference on offense. Ethan and Drew Peterson are the Trojans’ only two real on-ball guards. Tahj Eaddy has been forced into that role with Ethan out but Tahj is much better playing off the ball and looking for his shot instead of trying to create for others.

The other important change from last week is that Drew Peterson will almost assuredly play much better. He will not turn the ball over five times again and will be a more effective facilitator when he is teamed with Ethan to give USC two ball handlers who can also score. At the beginning of the season Drew, Ethan and Tahj all started and this is the Trojans best all around lineup. Drew did not play well in the two games last week and he should rebound and play much better on Thursday. Some players tend to let bad plays or games get into their heads but Drew can move past errors better than most college players.

It has become apparent over the course of the season that there are several factors which lead to success or failure for the Trojans. In Corvallis USC struggled in all of them and lost by 2. Don’t expect this to happen again. The Trojan players know that they need to beat OSU to continue their drive for the conference title.

The Trojans cleaned up some of the problem areas against Cal on Saturday after the loss to the Beavs. Evan was far more aggressive and thereby got more touches and shots. The Trojans cut down their turnovers, made their free throws and shot well from outside the arc. When these things happen the Trojans will win almost all of the time.

USC played solid but not outstanding defense against Cal; the Bears made a higher percentage of their shots than the Trojans’ opponents average this season. USC needs to get back to the lock down defense they played for most of the season before the last few games. Oregon State is not a great shooting team and the Trojans need to clamp down hard.

With all of their size and athleticism the Trojans are giving up too many offensive rebounds. Enfield has been asked about this a few times and he inevitably says that when opponents shoot a poor percentage there are more rebound opportunities. That‘s true, but this Trojan group has size and five good rebounders in both Mobley brothers, Chevez, Drew and Isaiah White. Perhaps this is too picky but USC should be able to better limit offensive rebounds.

The loss in Corvallis seems like a fluke; most good teams have an occasional poor game. The Trojans have not played as well the last two weeks compared to earlier in the season and need to get back on track. If Evan can continue to play aggressively on offense and Ethan returns to his pre injury form the Trojans will comfortably beat OSU. Even if this doesn’t happen I can’t envision the Beavs sweeping USC. Regardless of their recent success the Beavers are a very average team.