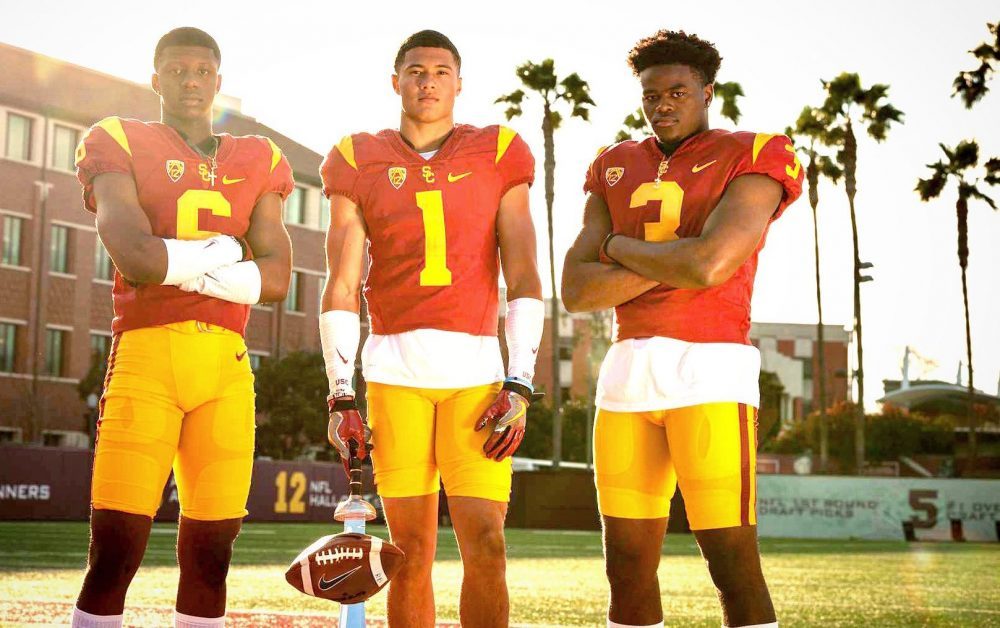 There are some outstanding California athletes at the top of the 2022 rankings and two-way player Larry Turner-Gooden (Playa Del Rey, Calif./St. Bernard) belongs in the discussion as one of the best.

The 6-foot, 180-pound wide receiver/safety is ranked as the No. 7 prospect in the state but the No. 50 player nationally, as he could make a major impact at safety or wide receiver. It’s likely in the defensive backfield where he’d line up for USC, as he’s being recruited by safeties coach Craig Naivar, but Turner-Gooden is taking the process slowly and is being recruited by power programs across the country.

On Thursday, he added an offer to Clemson to a sheet that already includes Alabama, Florida, LSU, Michigan, Oregon, Tennessee, Texas, USC, Washington and others.

Turner-Gooden (photo, far right) was recently invited to participate in the All-American Bowl, which he will do following his senior season. He plans to commit at that game, giving him well over a year to finalize a decision.

“I’ve been taking the process slow and steady because of how young I am and all of the circumstances that have been going on in today’s world,” Turner-Gooden said.

Arizona State, Oregon and Washington will be three Pac-12 programs looking to continue making noise recruiting the top Southern California prospects. Clemson is becoming a dream offer for a lot of top recruits in the area, and LSU has an in with some Southern California natives there now or planning to head there as part of this class.

But USC will push hard to land the talented four-star prospect.

“The relationship with the whole coaching staff is pretty strong,” he said of the Trojans. “I make sure to stay in contact with USC, just like all the other schools that are interested in me.”

“I knew a lot about USC growing up, because they’re in my backyard,” Turner-Gooden said. “I know about how traditional they are as far as uniforms, and the legendary players way before my age, and how they have the most draft picks overall in college history. I’ve met a lot of USC legends and played for them, so the school speaks for itself.”

Turner-Gooden is one of the prospects who can speak to exactly what USC is getting in Claiborne, who recently joined the staff as a quality control assistant.

“That’s a big steal for USC,” Turner-Gooden said. “Before football, they’re getting a great person. They’re getting a person who works hard every day, a person with great experiences on all levels of the game, a guy that’s going to push you to do better on and off the field. He’s much more than a football coach, but a mentor and most definitely someone you look up to.”