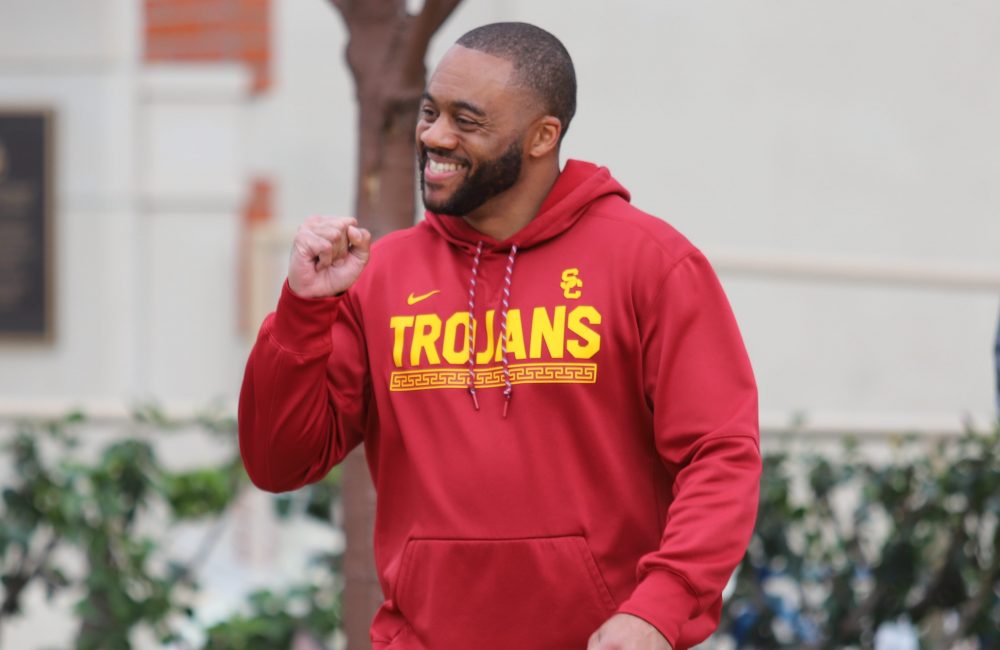 USC is the first school to extend an offer to Coleman since his decommitment, though he already held plenty of big-time offers, including ones from Auburn, Florida State, Georgia, Miami, Oklahoma, Penn State and others. He’s the No. 259 overall prospect, and all the way up at No. 115 overall and the No. 14 wide receiver by 247 Sports.

Coleman is a standout basketball prospect as well and was a potential walk-on addition to the Kansas basketball team.

This could eventually be a second two-sport athlete for USC in this class, as the Trojans are considered the frontrunner to land tight end Michael Trigg (Tampa, Fla./Carrollwood Day)–a prospect being recruited to play both basketball and football for USC–who is set to announce his commitment on Sunday.

USC has been searching for a third wide receiver in this class, as the Trojans hold commitments from four-star Quay Davis (Dallas/Skyline) and three-star Michael Jackson III (Las Vegas/Desert Pines).

The Trojans have offers out to four-star athlete Titus Mokiao-Atimalala (Ewa Beach, Haw./James Campbell) and are in the mix to flip three-star athlete Josh Moore (Atlanta/Marist) from his Stanford commitment.

At 6-foot-4, Coleman was a big-play machine last season. He caught 35 passes for 1,143 yards and 22 touchdowns in 2019. He scored two more touchdowns on the ground and intercepted seven passes on defense. While he is not playing against elite high school competition, he dominates the way a big-time prospect should For a big receiver, he gets up to top speed quickly and brings some agility to the position.

Coleman also has a frame that could support some added weight to allow him to simply grow into a bigger receiver or a hybrid tight end/receiver.

Whatever team eventually lands him is hoping it can repeat the success LSU had with Ja’Marr Chase, who decommitted from Kansas during his recruiting process and eventually won the Biletnikoff Award as a sophomore for the Tigers.

Coleman was Kansas’ highest-ranked commitment and would have been its highest-rated signee since the 2013 class.