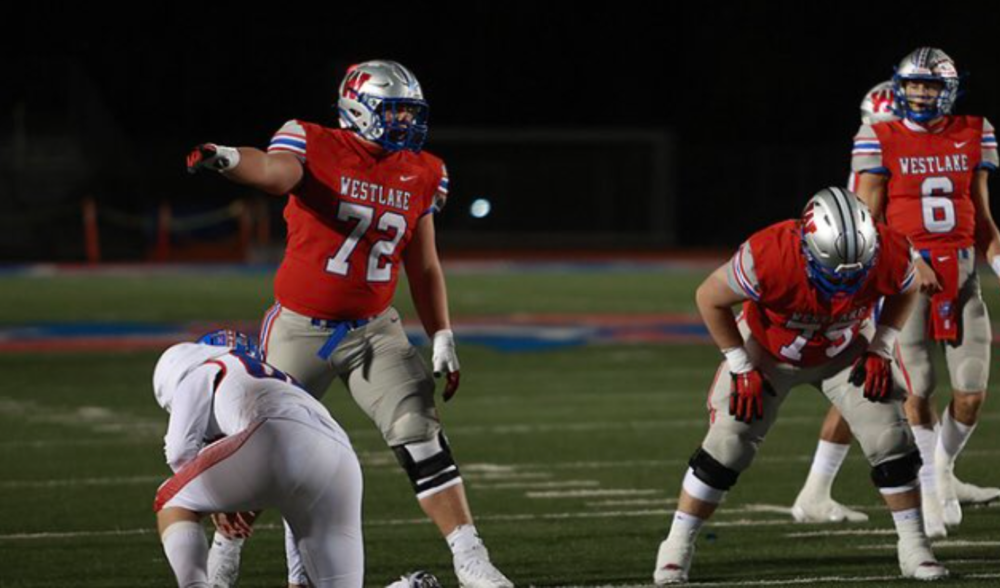 USC has been active in its pursuit of Texas offensive linemen over the past several classes and that is likely to ramp up another notch with the addition of offensive line coach Clay McGuire.

McGuire is a former Texas high school standout and has made plenty of connections in the state, having played at coached at Texas Tech and spending time as the offensive line coach at Texas State before coming out to USC. One of those connections was with 2022 offensive tackle Connor Robertson (Austin, Tex./Westlake), whom McGuire recruited while at Texas State.

The 6-foot-4, 300-pound Robertson played his freshmen and sophomore seasons in Connecticut, but starred for Westlake as a junior, finishing as an all-district selection for a state champion. He already holds offers from Duke, Houston, Kansas State, Minnesota, Nebraska, TCU, Texas, Virginia and a number of Ivy League programs. On Tuesday, the three-star offensive tackle added an offer from USC to the list.

The Trojans already hold a commitment from three-star center Dylan Lopez, who recently announced a move from Moreno Valley (Calif.) Rancho Verde to IMG Academy in Bradenton, Florida. High four-star offensive guard Earnest Greene (Bellflower, Calif./St. John Bosco) remains arguably the top priority among offensive linemen in this class for USC. The Trojans also have their sights set on a number of other West region prospects, including several in Washington — tackles Josh Conerly and Malik Agbo, and guards Dave Iuli and Vega Ioane — as well as Utah guard George Maile and Arizona guard Parker Brailsford. But Texas produces an abundance of offensive linemen compared to the entire West region, so it makes sense that USC would look there when the connections run so deep and there are prospects who can escape the pull of the in-state and SEC schools.

Robertson could wind up being one of those, though in-state offers from both TCU and Texas will be interesting to monitor, especially with Steve Sarkisian now at Texas and looking to lock down that state.

USC has made a habit lately of recruiting offensive linemen who play tackle in high school but could either stay outside or transition to guard at the next level. Robertson fits that mold, as he possesses the solid feet and punch of a tackle, with the tenacity and a consistent craving for contact that would help him inside.

Just because USC offers an out of state prospect doesn’t always mean that they’ll get a long look, as recruits aren’t always looking to get away from home. It remains to be seen whether Robertson will stay in state, but USC is going to get a real look from him.

He’s developed a solid relationship with McGuire due to the recruiting process at Texas State, but Robertson also played with McGuire’s nephew at Westlake. Stoney McGuire played some quarterback for Westlake this past season, behind standout 2022 four-star quarterback Cade Klubnik — a major target for the in-state schools this year. Robertson said he knows the USC assistant coach from that connection as well.

Ultimately, it sounds as though the Trojans will have a shot with Robertson as long as they stay present in his recruitment.

“I think this will have a great impact on my recruiting,” Robertson said of the offer from USC. “It is an outstanding school and obviously an amazing program.”