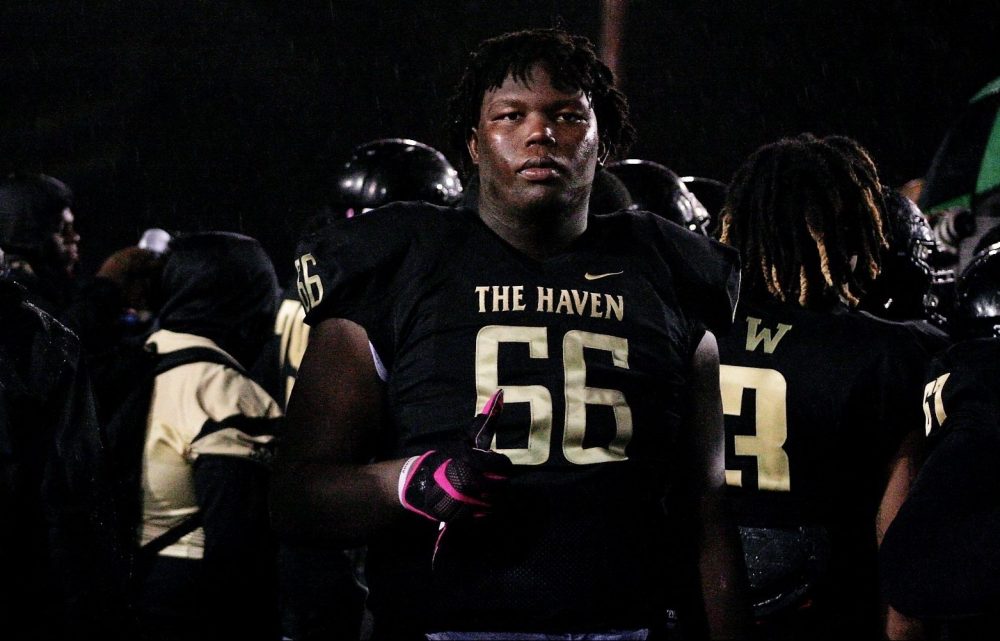 Former Trojan wide receiver Michael Pittman had a direct impact on a number of USC games last fall. Now, Pittman might have an indirect impact on USC’s 2022 recruiting class.

Aliou Bah (Memphis/Whitehaven) (pronounced ah-LOO), a 6-foot-6, 325-pound offensive tackle, picked up an offer from USC earlier this week, and it was Pittman who unwittingly helped lay the groundwork.

“I was watching YouTube videos and one of the players, Michael Pittman, vlogs his daily life,” Bah said of the former receiver’s channel that started one year ago. “It shows what it’s like to be a USC football player and it’s like a mini visit. I didn’t get to travel across the country to experience it, but I got to see it through that.”

With his interest in USC piqued, Bah said he immediately reach out to the Trojans coaches once USC offensive graduate assistant Viane Talamaivao followed him on Twitter.

“There are schools I’m very interested in, like USC, so I had to hit them up,” Bah said.

It led to a conversation a couple weeks later between Bah, Talamaivao and Tim Drevno, where the USC offensive line coach extended a scholarship offer.

“It was great talking to them on the phone,” Bah said. “They are really cool people, down to Earth. I’m looking forward to building a relationship with that staff.”

Bah said it’s the combination of athletics and academics that draws him to USC.

“I’m huge on academics and they have one of the best academic programs,” Bah said. “That stood out to me, as well as the culture. They produce and develop Sunday, NFL players. It’s a great school.”

Former USC offensive lineman Tyron Smith is someone Bah looks up to as a football player, so his path through USC is also a big positive for the Trojans.

Bah adds the USC offer to previous ones from Florida State, North Carolina, Tennessee and Texas A&M, as well as others. Tennessee was his first offer, but all of thosethose are a few that stand out to him at the moment. He expects things to pick up on September first when some of the recruiting restrictions are lifted for the 2022 recruiting class.

It’s been difficult on Bah–as it has on the entire 2022 recruiting class–not being able to take unofficial visits this summer, but he’s doing his best to investigate every school through social media, videos, and virtual visits. USC is definitely one of the schools he’ll be looking into more closely.

With the pandemic limiting his ability to travel and visit other schools, Bah said it “does open the door” to the idea of simply going a few hours away to Tennessee or a few minutes away to Memphis. But playing it safe and staying closer to home isn’t necessarily the game plan for Bah.

“I live by the idea that you have to take risks to become rich,” Bah said. “I want to use the game to change me and my family’s life, and traveling is a big part of that. I still want to explore other options instead of just going a couple minutes up the road.”

Bah is a massive offensive tackle, but said his athleticism is something that catches coaches and opponents alike by surprise.

“I like to make an impact on the offense,” Bah said of his game. “I’m really big. I can create lanes for my backs to get through and I can protect the quarterback so he feels no pressure. I can really overpower kids and I use my size to my advantage. I also have quick feet. They don’t think people my size can move that well, but I get out there and get loose.”

There has been plenty of talk about how USC’s Air Raid system under offensive coordinator Graham Harrell could affect offensive line recruiting. For Bah, it’s a huge benefit.

“College has been developing to the Air Raid system and USC has been running that now,” he said. “They said I would fit great into the scheme and the system. The Air Raid offense is an NFL type of offense now, and being able to get developed in it would better my chances.”

Going outside the state for offensive linemen in the 2022 class will likely be mandatory for USC. At this point, four-star tackle/guard Earnest Greene (Bellflower, Calif./St. John Bosco) is regarded as the one can’t-miss offensive line prospect in California. The Trojans have also offered center Dylan Lopez (Moreno Valley, Calif./Rancho Verde). But it’s clear the Trojans have their sights set outside the state for a few bodies, as the offers to national offensive linemen continue to pile up.

There is still some time left in Bah’s recruiting process, as he said he’d like to make a commitment sometime next summer, so that he can turn into a recruiter and help build the rest of his class.