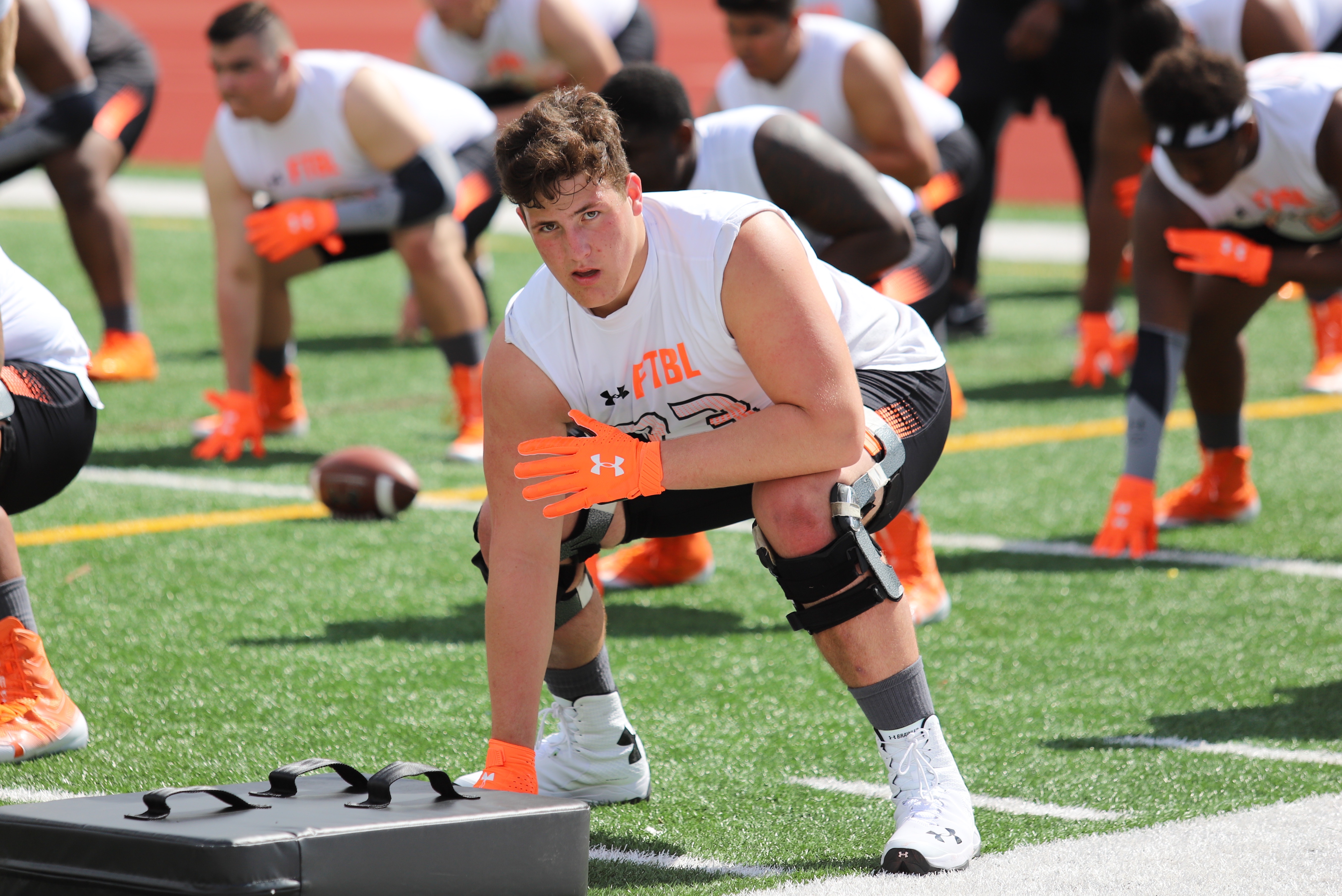 Some of the top prospects in Southern California, including more than a few USC targets, took the field at Mission Viejo High School on Sunday, for the Under Armour All-America Camp.

The promise of getting a look at two of the top quarterbacks in the country never materialized, as neither USC commit Bryce Young nor standout signal-caller DJ Uiagalelei participated.

But there were notable performances from every position, and USC targets were largely productive during the day.

Along the offensive line, the standout was Drake Metcalf (Bellflower, Calif./St. John Bosco), who picked up a recent offer from USC.

Metcalf is the kind of player you love having on your team and can’t stand when he’s lined up for the other guys. Watching him finish reps reminds me of basketball players going over the rim to swat away practice shots taken after the whistle. He’s constantly finishing reps by pushing or nudging his opponent backward, just to show that he had more to give. His physicality, even in an event without pads, jumps out immediately and is something on which he prides himself.

As far as recruiting, Metcalf, who comes from a very pro-USC family, said USC is looking at him as an interior lineman, either center or guard. He also mentioned that he watched the Graham Harrell media session and liked what he heard, specifically that the offense will be pass heavy.

“Pass protection is something I take very seriously,” Metcalf said, adding that he also liked hearing about presence of a running game. “I also love smash mouth, running football.”

Metcalf wants to take visits to at least some, if not all of the schools that have offered, specifically mentioning Arizona State, Florida State, Penn State, and USC. He isn’t completely sure about a recruiting timeline, but said he would like to take official visits during the season.

Most positively for USC fan, Metcalf said the recent struggles of USC, both to win games on the field and keep players on the roster, has “absolutely no influence” on him, as he continues to seriously consider the Trojans.

One of Metcalf’s reps that got a little heated came against 2021 USC defensive tackle commit Jay Toia (Simi Valley, Calif./Grace Brethren). Toia started a little slowly in the one-on-one portion (special mention should be given to fellow 2021 prospect Josh Simmons (San Diego/Madison) for two really good reps against Toia). But Toia had a really good day overall and showed well as a stout, athletic presence that can anchor the middle of a defensive line.

As always at these events, the wide receivers grabbed most of the headlines, and the usual suspects proved themselves again.

It was easy to see why 2021 wide receivers Cristian Dixon (Pomona, Calif./Diamond Ranch) and Beaux Collins (Bellflower, Calif./St. John Bosco) do hold early offers from USC. Dixon is smooth in everything he does, while Collins is all of 6-foot-4 and starting to fill out his frame. Both had very productive days.

Collins was effusive in his praise for USC, saying the Trojans are high on his list and that he really likes both head coach Clay Helton and wide receivers coach Keary Colbert. He is another recruit who says he is unaffected by the seeming recent unrest around the USC program.

Tight end Jack Yary (Murrieta, Calif./Murrieta Valley) is a familiar name for Trojan fans, as the son of legendary USC tackle Ron Yary. And while he does have the frame to make a potential move to offensive tackle, he really showed well as a pass catcher on Sunday. Despite a few passes sailing well out of his reach, he looked fluid as a runner and getting in and out of breaks.

In the defensive backfield, Kourt Williams (Bellflower, Calif./St. John Bosco) continued his terrific spring. The safety has piled up offers over the past few weeks and looked good again in this camp setting. Williams picked up an offer from USC back in September, but is one of several prospects who mentioned a lack of stability when speaking about the Trojans, specifically in terms of the recent transfers by new players and veterans alike. Williams said there has been little contact with new defensive backs coach Greg Burns thus far.

“Kingsbury leaving threw people off, because he was there for such a short time,” Green-Warren said.

The standout cornerback made an early commitment to Oklahoma, but this feels like a recruiting battle the Trojans could keep themselves in, provided the four-star talent gets a sense of security that things are stabilizing at USC. He said he would like to get out to a spring practice to check things out, and wants to get a sense of what Burns has in store for his defensive backs. One huge key for USC in this recruitment could be defensive grad assistant Chris Hawkins, who has known Green-Warren for years.

From the 2021 class, offensive tackle Tiaoalii Savea (Las Vegas/Desert Pines) has a great frame and showed some flashes today.

There were also a couple of freshmen (Class of 2022) to keep an eye on as well. Offensive tackle Earnest Greene (Bellflower, Calif./St. John Bosco) looks like a national recruit in two years, while safety Cyrus Moss (Las Vegas/Bishop Gorman) is all of 6-foot-3, and athletically gifted, with the frame to potentially stay in the secondary or slide up into the front seven down the road.