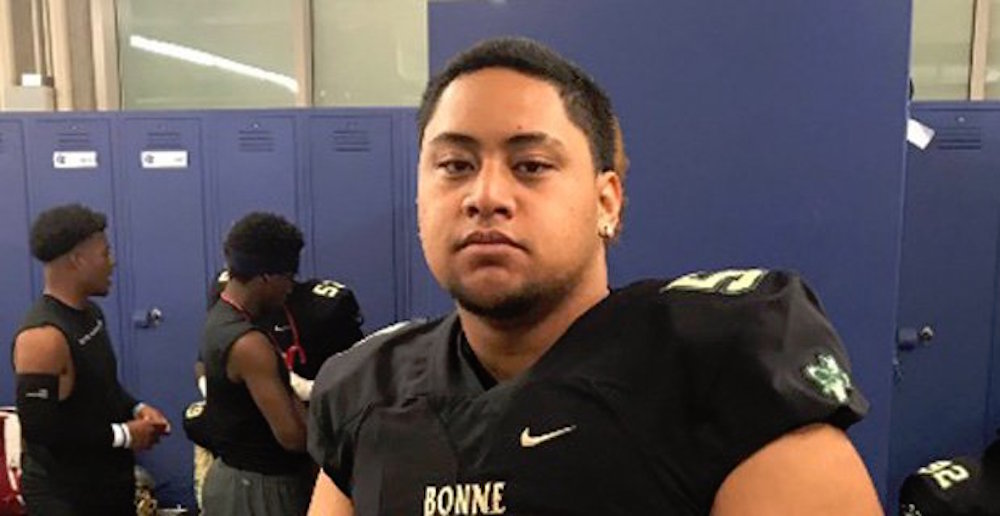 USC received a verbal commitment on Sunday night from Tilini Livai, an offensive guard from Narbonne who had been offered over the weekend after attending the USC basketball game against Nevada with teammate and Oregon commit Jonah Tauanu’u, who is also a top Trojan recruit.. Livai (6-3, 300) is originally from Hawaii and was a starting guard for the Narbonne team that lost in the state playoffs on Friday night to Cathedral Catholic. His other offers were from Hawaii, New Mexico and Iowa State.

Wow! Super excited to announce that I've been offered and will accept the offer from USC. I want to COMMIT to continuing my academic and athletic goals with the Trojans! Thank you Coach Helton! ✌?#fighton pic.twitter.com/H8njtE3Tcj

USC now has three commits on the offensive line with Jason Rodriguez, Gino Quinones and Livai.

Jackson had long been considered a Trojan lean with a strong family push toward USC but the firing of Kenechi Udeze was a blow for him considering his good relationship with BKU, and the ASU staff made a big impression on him last week by stopping by the hospital after the birth of his baby brother. As is often the case, however, Jackson came away from his USC visit impressed with the school and what it can offer so the Trojans have to be considered in a good position to land him.

Funa would be the real wild card from the weekend. He was a vocal supporter of the Ducks ever since giving a verbal commit last summer but he also held the title of “player I would most like to flip” because of his aggressive playing style that would fit right in with current Trojan freshmen Palaie Gaoteote and Solomon Tuliaupupu. Stay tuned on this one as you never know what can happen when Johnny Nansen is leading the recruiting charge for the Trojans.

There was a lot of speculation on if Davis would remain a member of this class for the Trojans after the firing of Ronnie Bradford, considering it was Bradford who had led the charge to bring him in, but not only did Davis make the trip but the Trojans will be sending a coach for an in-home visit last this week. The corner spot is certainly a priority with this class, and in addition to Davis and Williams the Trojans have made up a lot of ground once again with Chris Steelenow that Bradford is gone. There are still others in the mix but assuming USC makes a solid hire at the DB spot the chances are pretty good for Steele at this point.

Speaking of the DB coaching spot, with the news coming out this weekend that Mark Carrier is a candidate for the spot, here’s to hoping a hire like that is made for the staff. Carrier, one of only two USC Thorpe Award winners, checks off so many boxes in terms of what this staff needs and would be a major hire of substance. He has experience coaching in the conference (ASU) and with three different NFL teams (most recently the Bengals last year), on top of his obvious credentials as a player at USC, the NFL and LB Poly. It’s not a pre—requisite that the staff needs to have some Trojan representation but it also doesn’t hurt, especially when that candidate is as well qualified as Carrier.

And finally, as far as the Kliff Kingsbury watch, there was no real news from the USC end this weekend. There was, however, an interesting update from the LA Rams as it was reported that Sean McVay reached out to Kingsbury last week to discuss a potential consultant role for the remainder of the season and possibly beyond. This fits with everything we’ve seen from McVay, as the Rams don’t really NEED any help from Kingsbury right now, they have enough offensive brainpower to have the most exciting offense in the league and they just became the first team to clinch a playoff berth. But the fact that Kingsbury coaches a similar style to the scheme that the Rams run, why not take a look at adding him to the coaching mix if it can help get you to your ultimate goal of the Super Bowl? And with an owner with the deep pockets of a Stan Kroenke it wouldn’t appear to be cost prohibitive.

How does this impact USC? It depends on what Kingsbury’s ultimate goals are for his immediate future as a coach. The USC opportunity is still a tremendous one, assuming he is able to come to a working agreement with Clay Helton on items such as personnel, scheme, etc. The Trojan offense under-achieved this year but the talent is there for a quick turnaround with the right braintrust. If Kingsbury can be that guy, and is perceived as being the one who brought the life back to the USC offense, it would be a high-profile turnarou8nd that would gain a lot of notice in the college football world and set him up nicely for another head coaching job. Those who were around for the Pete Carroll era will remember how the spotlight shined favorably on Norm Chow for the job he did with the offense, perhaps too bright for Carroll’s taste, and that’s why it’s important to understand how any kind of working relationship would be negotiated between Helton and Kingsbury. It stands to reason it won’t be too much longer before we know a decision.

Congratulations to USC men’s water polo on their 14-12 victory over Stanford to win the 10th national championship for the program.