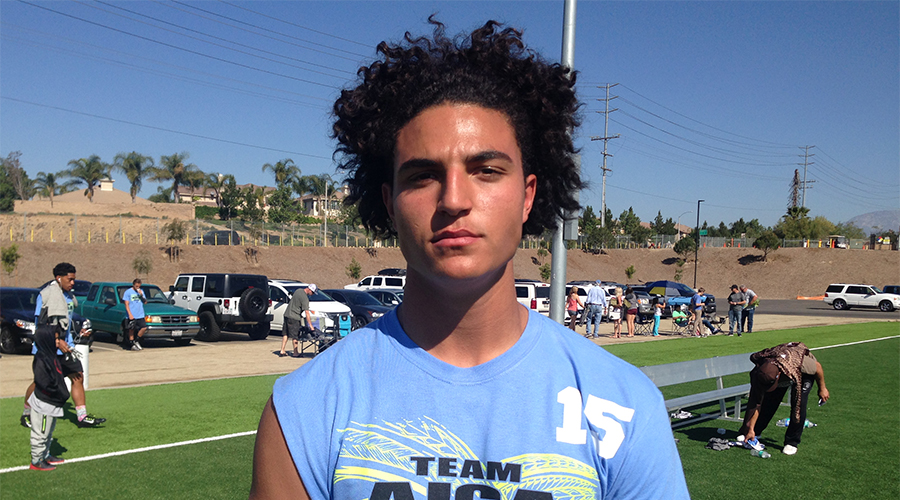 There were plenty of talented prospects on hand in Norco (Calif.) this past weekend at the IMG 7v7 West Regional, including one of the most sought-after members of the Class of 2017, outside linebacker/defensive end Jaelan Phillips (Redlands, Calif./Redlands East Valley). The 6-foot-5, 235-pound standout certainly didn’t disappoint as he shined for Team AIGA throughout the event at both linebacker and tight end.

Not surprisingly, on the recruiting front, Phillips’ stock has continued to soar this spring.

Stanford and UCLA have been known to be the frontrunners for Phillips’ services for quite awhile now, but one more program that has been making a push as of late is USC.

Phillips originally received an offer from the Trojans back in September, when Steve Sarkisian still served as USC’s head coach. Phillips also took in the Trojans’ victory over Utah in October at the Coliseum, but in the immediate weeks following Clay Helton’s hiring as USC’s permanent head coach, there wasn’t a lot of contact between himself and the new Trojans staff.

That all changed just around a month ago.

“Coach K.U. [Kenechi Udeze] and Coach Helton started to hit me up on Twitter kind of recently, four or five weeks ago, and so I started building that relationship,” Phillips said. “Now Coach K.U. and I have a great relationship. We talk all the time.”

Having gained a greater comfort-level with the Trojans coaches, Phillips decided to take an unofficial visit to USC during spring practice a week-and-a-half ago, and it’s safe to say that the trip left a lasting impression.

“It was amazing,” Phillips said. “Getting down there, being able to sit in on meetings, being able to talk to the guys a lot – I spent pretty much the entire practice talking to Noah Jefferson. I had a great time talking to him about campus life and everything like that. The intensity of practice was ridiculous, and that was something that I really liked. I love the scheme of their defense. I love the coaches – I love what Coach Helton is doing. So, there is definitely a lot of promising things. And obviously, the campus is beautiful. They have two billion dollars in construction. It’s ridiculous. It’s USC.”

So where do the Trojans stand now?

“It’s moved them into my top 3,” said Phillips, who noted that he’s being targeted to line up at the Predator outside linebacker position in the Trojans’ 5-2 defensive system. “It piqued my interest in them. It’s funny, because I didn’t really think about USC that much before. I obviously still had them in the picture and everything, but I didn’t really pay much mind to USC because of the coaching change, and I hadn’t really talked to the coaches at all, so I kind of focused on other schools.”

The situation has obviously changed now, but the Trojans certainly still have quite a battle on their hands, specifically when it comes to Stanford and UCLA.

Phillips, who sports an eye-catching 4.36 GPA, covets what Stanford brings to the table in terms of its blend of academics and athletics.

“There’s nothing better when it comes to the mix of football and academics than Stanford,” said Phillips, who has visited the Stanford campus twice this spring. “And it’s just the prestige of being able to say that you’re a Stanford alum. What they’ve got going on up there, No. 3 in the country for athletics, No. 4 in the country for academics – there’s nowhere like that. And for my defense at my school, we run, literally, the exact same defense as Stanford. Theirs is obviously a little more advanced.”

Phillips’ father, grandfather and grandmother all attended UCLA, so he naturally grew up rooting for the school’s football team, but there is more to his interest in the Bruins than that.

“I have family ties to UCLA, but also just the fact that it’s a great academic institution,” said Phillips, who will take an unofficial visit to the Bruins campus this coming weekend. “The athletics speak for itself – I love what they’re doing there. I have a great relationship with all of the coaches. It’s close to home – I love the area. We have a second house in L.A. actually. I’ve pretty much lived in L.A. for five or six years now. So, I can go home if I need to – if I’m homesick or if I want to see my family.”

And as Phillips revealed, he’s also still open to other schools as well, including Notre Dame, which he hopes to take an unofficial visit to in the near future.

Set to take part in The Opening Finals in July, Phillips will also have a busy summer school schedule as he remains on track to become a mid-year graduate from high school. As far as a timeframe for a commitment, Phillips believes that will likely happen sometime after his senior season on the field, but that certainly isn’t set in stone.

“I think at this point it’s safe to say that it’s probably going to be sometime after football season, but I’m not entirely sure,” Phillips said. “I could commit next week. It’s just whenever I’m ready, but I’m definitely taking my time and taking it all in.”