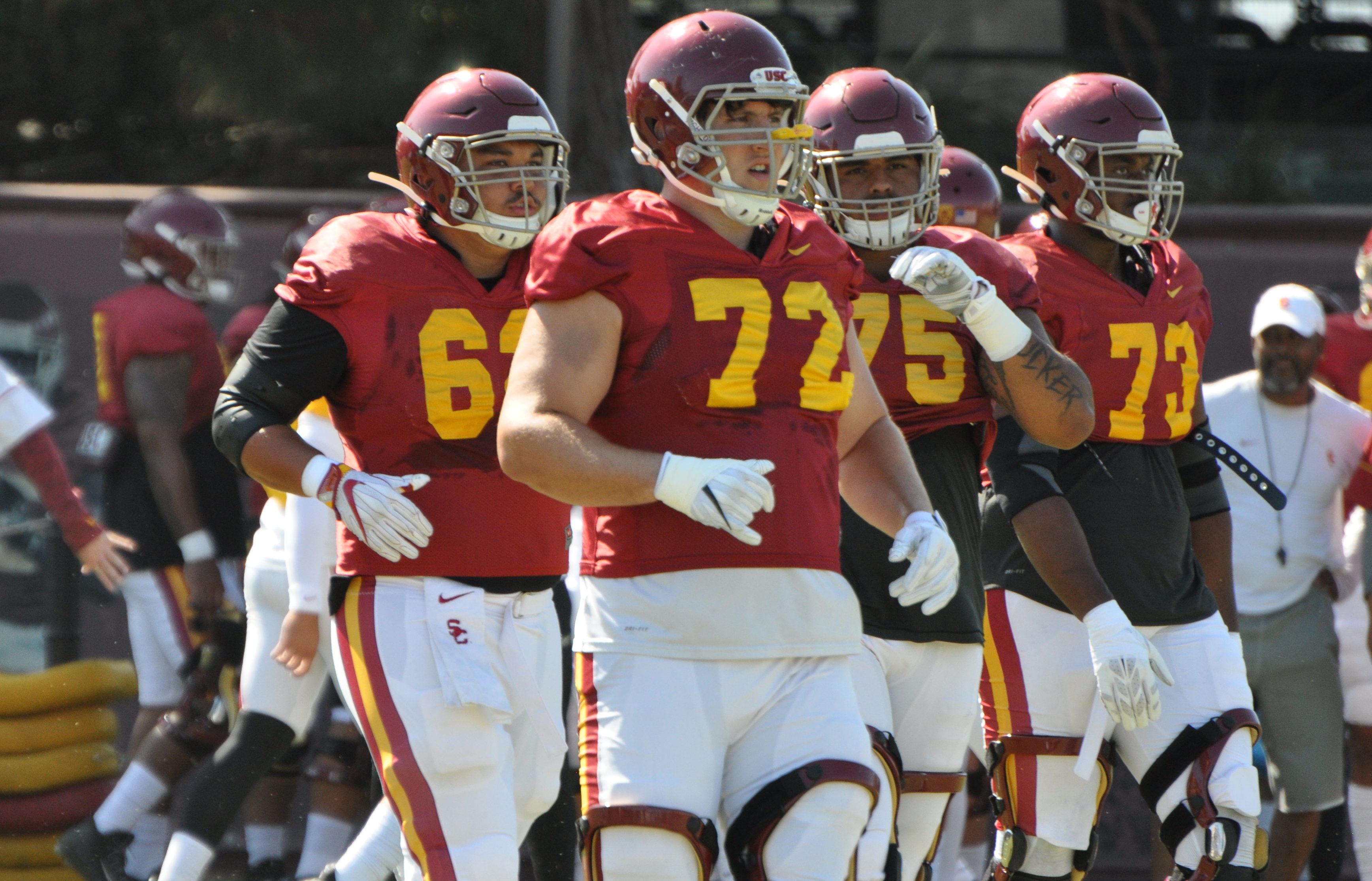 While the numbers have been better for USC offensive line recruiting over the past two classes–six signed in 2020, three committed in 2021–the four and five-star firepower historically typical of a USC recruiting class has not been there. The 2022 class offers USC an opportunity to take another run at a group of four-star West region linemen, including offensive guard George Maile (South Jordan, Utah/Bingham).

USC’s 2017 haul of offensive linemen was phenomenal, with three four-stars, a five-star, and five players who have started multiple games during their Trojan careers. But in this group of nine offensive linemen in the 2020 and 2021 class, just two are four-star prospects, as Mason Murphy (San Juan Capistrano, Calif./JSerra) recently earned a fourth star.

The 6-foot-3, 270-pound Maile is a top-300 overall prospect and a top-10 offensive guard according to both ESPN and 247 Sports. There are several West region offensive guards the Trojans are chasing in the 2022 class, and USC coaches are making Maile feel like a priority.

“The thing I like about USC is they’re always keeping in touch,” Maile said. “Every single day they’re sending a text. They’re asking me how I’m doing and how my family is doing…It gets me a feel for how the staff is, how they’re going to treat me–treating me with respect and like I’m a top prospect for them.”

USC has loaded up on guys with typical offensive tackle bodies in the last two classes, so it wouldn’t be surprising to see them take a few traditional offensive guards in the 2022 class. Though, head coach Clay Helton has mentioned that he likes bringing in high school offensive tackles who are capable of moving around on the line and potentially settling in at guard.

Maile might wind up being one of those guys, as he said his primary position is likely going to be guard, but he’d like to see if he can get some reps at tackle at some point in the coming years.

The lineman prides himself on his ability to perform well in both the run and passing game as well as his ability to understand and carry out all of his assignments, but he’s quick to point out what really makes him stand out.

“I’m very aggressive with the run block,” he said. “I can easily dominate people when I have the right mindset and the right technique.”

Maile’s offer from USC came back in April, and the linemen said it came as a surprise. He said USC is definitely a school under consideration for him and that he’s “loved their football program all (his) life.”

And Maile now has a close family connection to the school, as his mother earned her Master’s degree from USC earlier this year. Maile and his family were at USC in late February to take graduation pictures with his mom, but he said he didn’t do any tours or football activities while there.

Education will play a big role in Maile’s decision.

“Education is the top priority,” Maile said of what will go into his ultimate choice. “Also, how I’m going to fit into the football program and how they treat me as a player and a person.”

Since Sept. 1, when schools could begin initiating communications with class of 2022 prospects, Maile said Cal, Nebraska, Oregon State, UCLA and USC have been the schools reaching out the most often. He also has offers from Oregon and Utah, and those could be two difficult schools to beat if they turn up the recruiting pressure. Utah is the hometown school and has done fairly well with Utah prospects the last couple of years. Oregon has commitments from two Utah offensive linemen in this 2021 class–Kingsley Suamataia (Orem, Utah/Orem) and Jackson Light (Draper, Utah/Corner Canyon)–and Maile has visited the Ducks on an unofficial visit.

Maile is in no rush to move through the recruiting process. He said his plan right now is to wait all the way until his senior season to begin making a top list, and he’d like to hold off on announcing a commitment until signing day.

Including Maile (No. 10), the Trojans are chasing three of the top 10 offensive guards in the nation, as No. 2 guard Earnest Greene (Bellflower, Calif./St. John Bosco) and No. 5 guard Dave Iuli (Puyallup, Wash./Puyallup) are priority targets on the interior of the offensive line for USC.