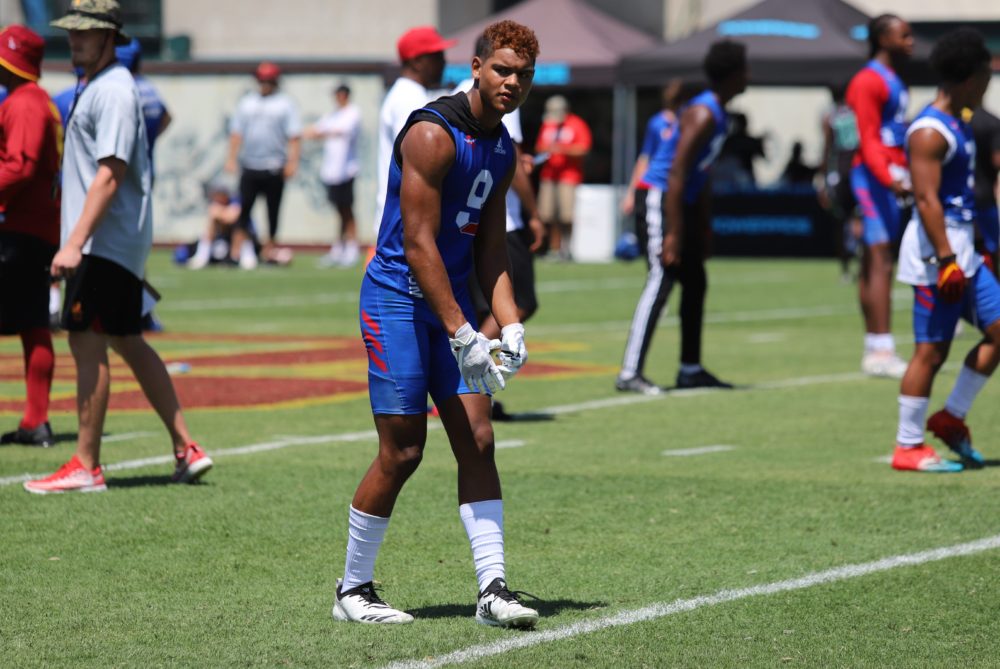 And then there were five for four-star wide receiver C.J. Williams (Santa Ana, Calif./Mater Dei).

The 6-foot-2, 193-pound wide receiver released his top five schools on Wednesday, keeping Alabama, Notre Dame, Stanford, Texas and USC in the mix. Williams is not expected to remain uncommitted for long, with a pledge likely coming before his senior season begins.

He’s the nation’s No. 73 overall prospect, No. 9 wide receiver and No. 7 recruit in California.

Williams has been a top local wide receiver target for the Trojans for some time, but he spent a lot of time looking at other options in June. He took official visits to Notre Dame and Texas, and an unofficial visit to Stanford. USC might be on the outside looking in at this point, but the Trojans have made up ground with pass catchers before.

Williams is a very talented all-around receiver and can play in the slot or outside. He possesses terrific hands and is a tremendous competitor.

USC holds a commitment from three-star receiver Kevin Green (Mission Hills, Calif./Alemany) and the Trojans are in a battle with Oregon for four-star receiver Isaiah Sategna (Fayetteville, Ark./Fayetteville), who will announce his commitment this weekend. Locally, Williams and fellow four-star prospect Tetairoa McMillan (Anaheim, Calif./Servite) have been two of the top prospects for USC, regardless of position. Notre Dame made a major impression on Williams during his official visit and the Irish will be chasing him in a big way after watching four-star wide receiver Nicholas Anderson (Katy, Tex./Katy) commit to Oregon. Anderson was a top target for both Notre Dame and USC.

The Trojans likely need a handful of receivers in this 2022 class, but the urgency to get at least three and maybe four might be tempered by the fact that incoming transfers Tahj Washington and Jake Smith were both 2019 recruits and could have multiple years of eligibility remaining