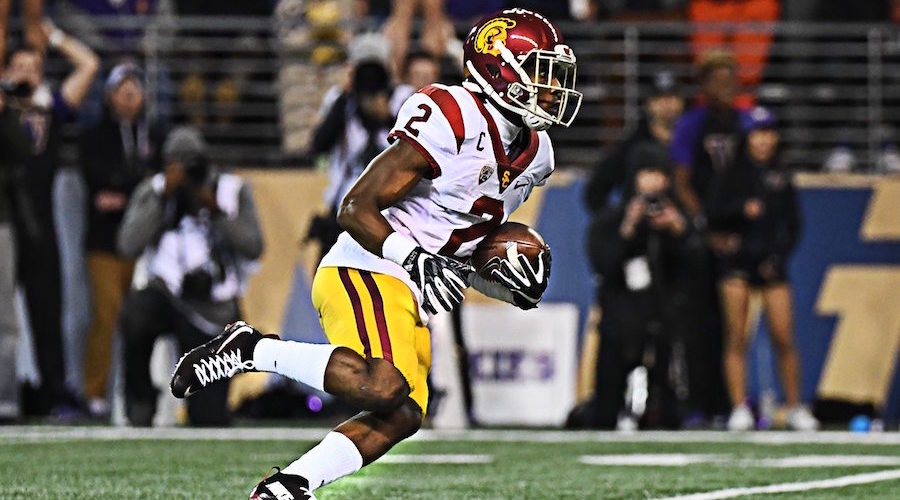 The victory included an outstanding performance by the Trojans defense, particularly up front, with the front seven making life tough for Washington quarterback Jake Browning from the get-go, while also limiting the Pac-12’s most proficient rushing attack (231 ypg) to a staggering total of just 17 yards. Cornerback Adoree’ Jackson did more than his part as well, intercepting Browning twice.

On the offensive side of the ball, USC signal-caller Sam Darnold – save for two interceptions – was stellar as usual, completing 23 of 33 passes for 287 yards and two touchdowns.

The first of those scoring tosses came early in the second quarter, with the redshirt-freshman finding Darreus Rogers in the back of the end zone for a 13-yard touchdown that gave USC a 10-3 lead. Rogers led all USC receivers in the game with six catches for 84 yards.

Later in the quarter, Darnold and Co. ran the two-minute drill to perfection, with USC tailback Ronald Jones II capping a nine-play, 82-yard drive with a four-yard touchdown run to give the Trojans a 17-6 lead at halftime.

The Huskies briefly turned the tide mid-way through the third quarter, with Browning connecting with John Ross (8 Rec, 154 Yds) for a 70-yard touchdown on a play where Jackson slipped in coverage.

On USC’s next offensive series Washington cornerback Taylor Rapp came up with his second interception of the day, and it looked like the Huskies, trailing only 17-13, might have seized the momentum.

But the Trojans defense rose to the occasion, once again, and on a 38-yard field goal attempt by Huskies place kicker Cameron Van Winkle, USC defensive tackle Rasheem Green broke through the line and blocked the kick, with Jackson making the recovery.

USC regained firm control of the contest on the ensuing drive by the offense, with Darnold throwing an 8-yard touchdown pass to tight end Daniel Imatorbhebhe (5 Rec, 78 Yds) to make it a 24-13 game early in the fourth quarter.

The Trojans added two more points on a safety where Browning, under intense pressure, tripped, with his knee hitting the turf before he could get off a pass attempt.

Browning finished 17-of-36 passing for 259 yards and one touchdown. He was sacked twice by Porter Gustin, and once by Green, who also had two pass break-ups. Michael Hutchings led USC with nine tackles.

Jones finished with 94 yards and one touchdown on 23 carries for the Trojans.

USC will next face UCLA on Saturday at the Rose Bowl.