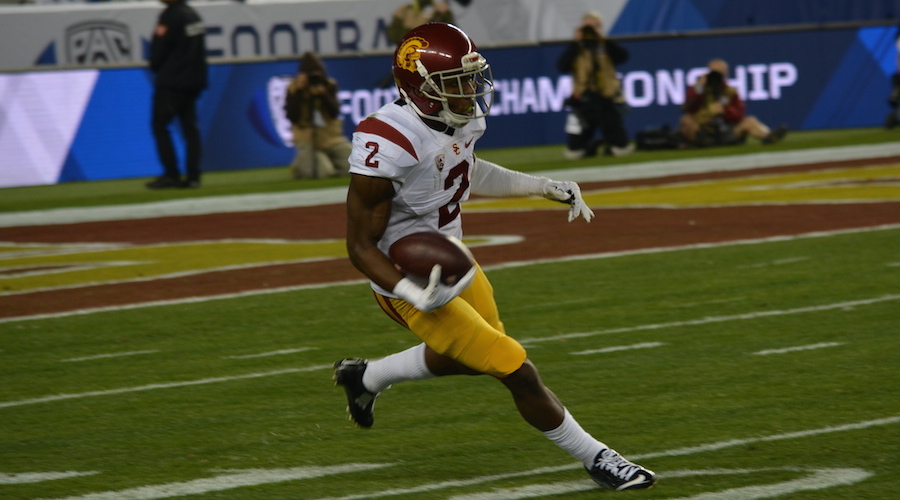 After a valiant comeback, No. 20 USC just couldn’t keep up with Christian McCaffrey and the No. 7-ranked Stanford Cardinal in the Pac-12 Championship game on Saturday night, falling by a final score of 41-22 at Levi’s Stadium in Santa Clara, Calif.

Stanford dominated the line of scrimmage on both sides of the ball throughout much of the first half, with McCaffrey racking up 155 of his 207 total rushing yards, and the Cardinal outgaining the Trojans in total yardage 209 to 80.

Still, thanks to some sturdy play by the Trojans defense in the red zone, USC trailed just 13-3 at halftime.

Buoyed by a late second-quarter surge, the Trojans came out clicking on all cylinders in the third quarter, with the USC offense putting together a seven-play, 65-yard drive that was capped by a one-yard Cody Kessler touchdown pass to Jahleel Pinner to cut Stanford’s lead to three.

After forcing the Cardinal to punt on their next offensive series, the Trojans marched back down the field with Ronald Jones II darting off for a 27-yard touchdown to put USC in front for the first time, 16-13.

But Stanford would rebound and take back control of the game. Cardinal quarterback Kevin Hogan ran for a seven-yard touchdown, before linebacker Blake Martinez forced Kessler to fumble on the Trojans’ ensuing drive, with defensive lineman Solomon Thomas picking the ball up and rumbling for a 34-yard touchdown to put Stanford in front 27-16.

Kessler put an end to the Cardinal run by scoring on a 12-yard quarterback keeper to cut the Trojans deficit to five early in the fourth quarer, but Stanford pulled away down the stretch.

McCaffrey, who also threw an 11-yard touchdown pass to Hogan in the first half, finished with a Stanford-record 461 all-purpose yards. He also eclipsed Barry Sanders’ NCAA single-season all-purpose yardage record, finishing with 3,496 yards, compared to Sanders’ mark of 3,250.

Kessler finished the night 22-of-37 passing for 187 yards and one touchdown. JuJu Smith-Schuster led the Trojans with 11 receptions for 87 yards, while Justin Davis recorded a team-high 99 rushing yards on 17 carries.

Both Stanford and USC will learn their bowl game fate on Sunday.