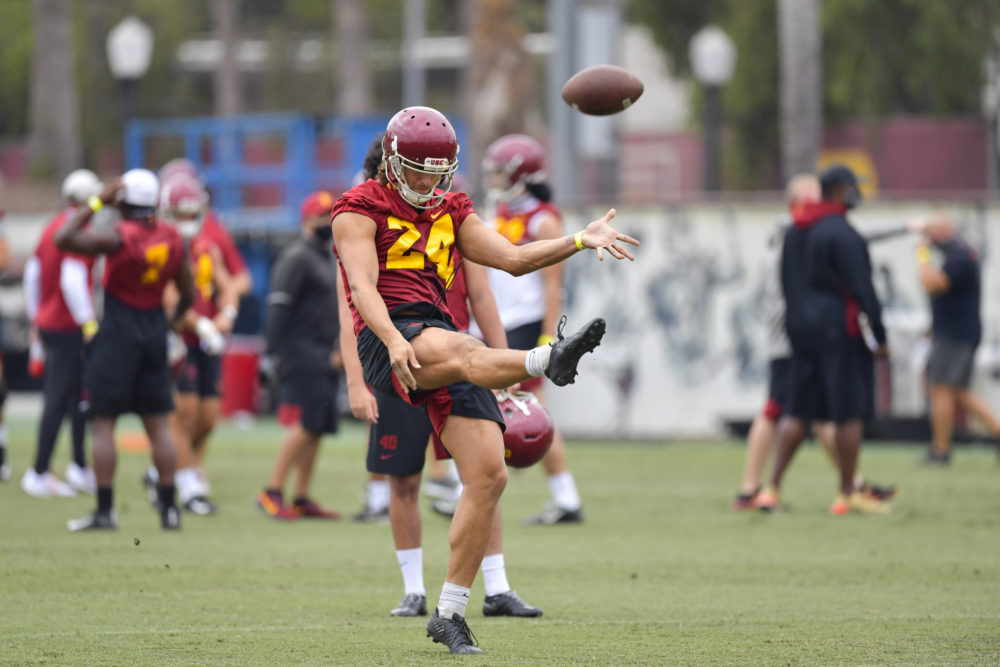 Kansas State, on the other hand, wasn’t just great when it came to returns that season. The Wildcats were the best in the country.

Now, he’s hoping to bring success in that important phase of football to USC, where he’s been met with a talented roster and some difficult challenges.

Head coach Clay Helton said the abbreviated spring didn’t allow Snyder to implement any of his special teams schemes, so that’s something that has needed to happen this fall. The issue there, of course, is that the defensive players needed for special teams units are also needing to learn an entirely new defensive scheme. That’s put some extra stress on the players, and Snyder is doing his best to alleviate any issues that might cause.

Snyder said he’s trying to keep his schemes simple so that the players can be fundamentally sound in what they’re doing on coverage and return units, in order to “execute at a fast pace and a high level.” Snyder said that while some special teams plans might necessitate wholesale changes from week to week, depending on the opponent, he’s concentrating more on the fundamentals and the basics, making sure players aren’t overwhelmed and giving them things that will be consistent through the season.

“I’m not asking the players to do a bunch of different stuff,” Snyder said. “My goal is to be able to bend and mold what we’re doing to who we’re playing against.”

The second issue is a logistical one. With USC having a limit of how many players can be in one area at one time, the Trojans have been using four different practice areas. Special teams often needs to utilize players from both offense and defense, which means it can be difficult to get everybody together. Snyder said he’s been able to take advantage of getting defensive players together in one area in order to install units where those players make up a bulk of the roster.

“I’ve been able to challenge myself in creativity, which I haven’t had to do like this for my entire career,” Snyder said.

Snyder has been pleased with the development of the special teams units. He said they had a great practice on Tuesday and things are “starting to pick up.”

“We’re getting to that point where we’re really starting to look like what it’s supposed to,” Snyder said. “Their consistency is improving as we go on each day.”

At this point, Snyder appears to be extremely comfortable and confident in his specialists. He said kicker Chase McGrath and snapper Damon Johnson as “as solid as can be” and offer him nothing to worry about. He was also effusive in his praise for punter Ben Griffiths, who showed tremendous potential last season but wasn’t always consistent with his placement.

“Ben’s got such an upside as far as potential and what he can do,” Snyder said. “The biggest thing was consistency.”

Snyder said the team is looking for great hand time and good distance, but it’s important that he’s hitting punts that are coverable, so if there’s a miss, it’s not something that allows for a big return. To this point, his consistency has improved to the point where Snyder said he’s hitting nine out of ten or even ten out of ten punts really well.

“I think what he has the potential to do this year is unlimited,” Snyder said.

The Trojans would also seem to have the talent in the return game to set up the offense a little better or perhaps hit some bigger plays. USC returned a kickoff for a touchdown in the season-opener last year but then had just two more returns that went more than 30 yards over the rest of the season. Kansas State, meanwhile, had four kickoff return touchdowns and another nine returns of more than 30 yards.

Snyder said Amon-Ra St. Brown, Tyler Vaughns, Olaijah Griffin and Stephen Carr have been a few of the players handling return duties, and it’s clear that Snyder isn’t just looking for ball control and fair catches from those guys. Going all the way back to his initial press conference after taking the USC job, Snyder said what he’s looking for from his returners are touchdowns and big plays. He said he’s aware that some special teams units are simply designed to get the ball back for the offense, but that’s not what he’s looking for.

“Coming from Kansas State, one of the things that was always a big swing for us was special teams,” Snyder said. “Special teams have to be a part of the game…something that’s going to make a big play or do some big things.”

Snyder said that when the Wildcats went up against teams such as Oklahoma or Texas, if they didn’t get a big play or two out of special teams, they weren’t going to be able to “get over the hump” in those games.

“Whenever you’re stagnant on one side of the ball, you need something out of special teams,” he said.

As for what will change regarding special teams this season, Snyder said he “didn’t look in the rearview mirror” when he took over at USC. He watched a little film from last season, but he didn’t want to get into practices with any thoughts about what players could or couldn’t do. He said he wanted to give everybody a fresh opportunity to prove themselves and he’s been able to lean on safeties coach Craig Naivar, who has coordinated special teams before, to compare notes on different players.

Snyder said he also leans heavily on the players themselves for feedback.

“It’s their team,” he said. “They are the guys who have to get on the field and do it…I want them involved.”

Snyder met with several players last night and said that’s something that continues throughout the season. He expects players to watch special teams film–though he understands the balance starters need to take and the emphasis that will be put on offensive or defensive film for those guys–and he loves when players are able to bring him a nugget or two from their film study that he might not have seen previously.

Snyder said Helton has made every player available for special teams, though Snyder doesn’t like to put offensive or defensive starters on more than two units.

At this point, Snyder said Isaiah Pola-Mao, Talanoa Hufanga, Jayden Williams, Raymond Scott, Bru McCoy, Drake London and John Jackson III have impressed when it comes to overall special teams play. Though he added that there are quite a few guys beyond that who have impressed him as well.

“There’s quite a few guys who have really stepped up,” Snyder said. “As we go through the process, there’s going to be more guys where it starts to click for them and the speed and pace of what we’re trying to do becomes better…This is a very talented team.”