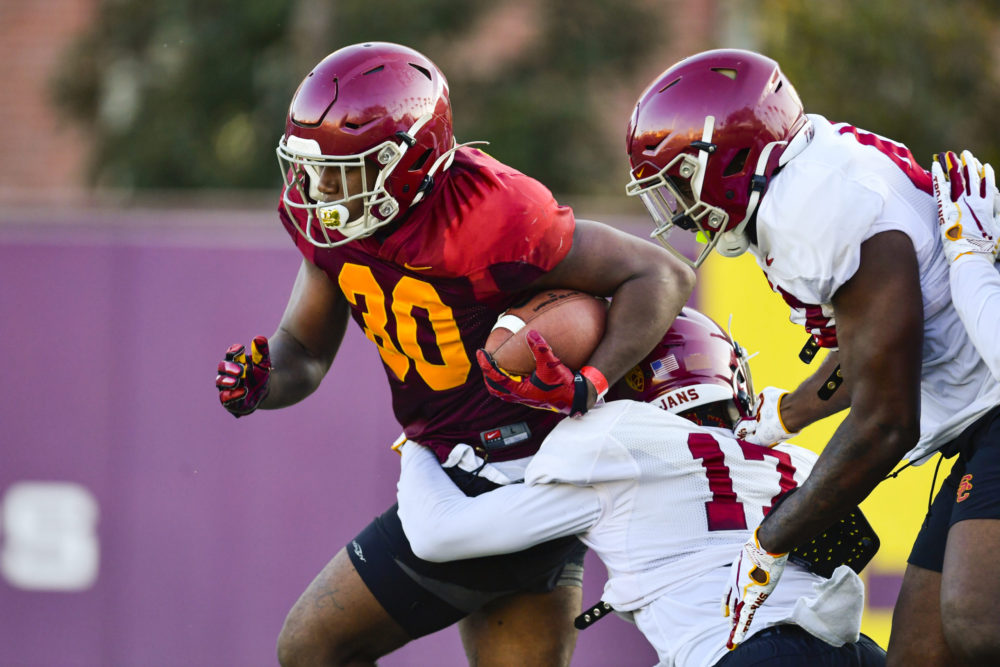 It’s not anywhere close to the 10-tailback depth chart that USC began the 2007 with, but the Trojan coaches are faced with an interesting challenge when it comes to running backs this season, as four backs enter the season having already proven they are capable of serving as the starter. Finding carries and opportunities for more than three backs at a time is typically difficult to do, but the Trojans can make it work.

Seniors Stephen Carr and Vavae Malepeai are clearly the most experienced of the group, but sophomore Kenan Christon already has as many starts in his career as Carr, and Markese Stepp is the only back who averages more than six yards per carry.

All four backs were on the roster last season and it proved to not be enough bodies. Not only was Christon called upon to fill a bigger role well before the Trojan coaches wanted to put him in that position, USC also brought former walk-on tailback Quincy Jountti onto the field more regularly, and also found ways to get wide receivers Amon-Ra St. Brown and Michael Pittman the ball on running or sweep plays.

Carr, Malepeai and Stepp all missed significant portions of last season due to injury and if anything like that happens in 2020, again it will feel like too few bodies in the backfield. But all four tailbacks will hopefully be rested, rehabbed and ready to go this season.

“I thought he looked really well,” Helton said. “It’s really his first action of being able to put that foot in the ground, maneuver and cut. We had a limited plan for him and actually he handled it so well, we gave him a little bit more on Saturday.”

Helton said he spoke with Stepp on Monday morning and the 6-foot, 235-pound bruising back said he felt great.

“Very positive, to be honest with you, on where he’s at,” Helton said. “He’s one that we’ll gauge over these next four weeks, but early signs, he looks healthy.”

And now another back might not quite yet be in the clear. Malepeai, who is all the way back from a knee injury that derailed his 2019 season, but sat out the beginning of fall camp as he deals with a hamstring injury. Helton said Malepeai has been working with a rehab specialist for a majority of the time and was pleased with how his knee was feeling.

“Now it’s just getting his hamstring right for the season,” Helton said.

This USC offense under Graham Harrell is always going to showcase the passing element. The Trojans return one of the nation’s best quarterbacks in Kedon Slovis and an array of pass-catching talent at wide receiver and tight end. But there were several times last season when the offense stalled a bit and the Trojans could never quite fully turn to or trust that the running game would be there. Malepeai was the only back to register more than 100 combined rushing and receiving touches.

This season, the Trojans still have wide receiver who will need passes directed towards them. St. Brown, Tyler Vaughns and Drake London return, with Bru McCoy, John Jackson III and others ready to fill the void created by Pittman’s departure. But Helton said there’s also confidence that a potential log jam in the running back room won’t turn into an issue.

“As we saw last year, you have to have backs,” Helton said. “It’s the most physical and violent position on the football team when you’re talking about getting tackled every time you touch the ball.”

But Helton said the talented tailbacks might not be be utilized individually as much this season.

“The other thing that we’re looking at also, is having the ability to use two backs at one time,” Helton said, adding that USC could go to a 20 personnel look at time this season, with three wide receivers and two tailbacks on the field.

“It’s a package that we’ve worked over the summer and can utilize at any time,” he said.

It wouldn’t be the first time USC lined up in a two-back set under Harrell, but it would offer a new wrinkle for this offense if the Trojans went to it with any regularity. There were times last season where opposing defenses looked to be daring USC to try to power the ball inside or commit to the running game. While the passing game is still going to put up numbers, keeping these talented running backs involved in the offense–whether with carries or receptions–is going to be something to watch and could ultimately even help decide a close game.