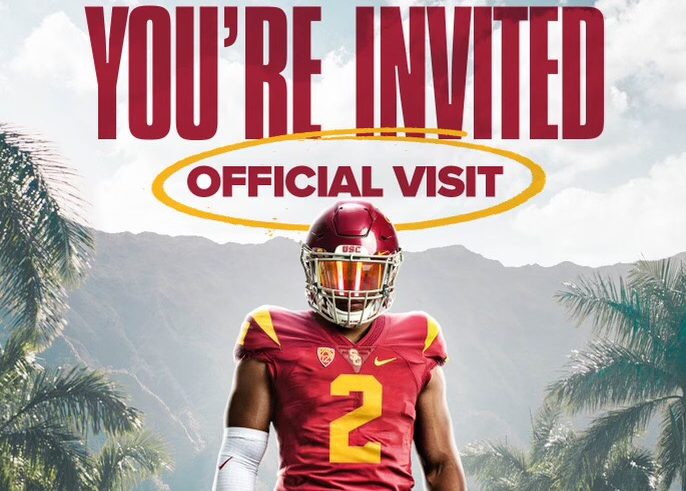 The recruiting dead period is still set to run through the month of May, but the USC Trojans are already in the starting blocks, ready to launch into a full spring the moment recruiting restrictions are lifted.

The Trojans are locking in official visits for the first three weeks in June, as college coaches are desperate to once again get prospects on campus. Schools will have gone more than a year without official or unofficial visitors, as well as coaches actually being able to see recruits in person.

USC head coach Clay Helton said last fall that they were looking forward to once against hosting recruits this spring, before the dead period was extended (and then extended again). It’s a very important part of the recruiting process for a school like USC, which recruits nationally and benefits from the spring and summer weather, as well as the campus atmosphere when hosting recruits and their parents from Texas or the Southeast, or other parts of the country.

It also allows USC to gather the top prospects in Southern California in once place at one time, and letting those recruits get a sense of the program and the team up close will be big with the new additions at USC, including the strength and conditioning program, analysts and staffing additions, and a 2021 recruiting class that will undoubtedly have an impact on the 2022 class.

So far, at least a dozen top USC targets have scheduled official visits for June, and that number could climb much higher in the coming weeks. With new additions and a solid structure in the recruiting department, USC should be capable of hosting and capitalizing big recruiting weekends.

USC has set up June 4-6, June 11-13 and June 18-20 as its June recruiting weekends, and the talent that will be on campus for those is already tremendous. Again, this is just an early sampling of who is planning to take official visits then. The lists can and will definitely change as recruits are added.

Four-star cornerback Jaeden Gould (Oradell, NJ/Bergen Catholic) has said he’ll visit USC in early June, as the Trojans continue to chase the nation’s No. 145 overall prospect. Gould is looking at a number of Big Ten schools, with Michigan potentially out front, but Penn State and Rutgers involved as well. Notre Dame and USC are in the mix.

USC is off to a very strong start at cornerback, with five-star Domani Jackson (Santa Ana, Calif./Mater Dei) and four-star Fabian Ross (Las Vegas/Bishop Gorman) already committed. But it’s clear that USC wants at least one more impact player at the position, and Gould is one of those targets.

There are some big names scheduled to come in this weekend, including a pair of top four-star defensive tackle targets in Christen Miller (Ellenwood, Ga./Cedar Grove) and Mykel Williams (Columbus, Ga./Hardaway). Both are going to be very difficult to pry away from Georgia, but defensive line coach Vic So’oto has done a terrific job with both prospects without being able to get them on campus. USC is hoping that allowing them to make the trip and see the school in detail provides enough reason for them to head across the country for college. Both Miller and Williams had initially planned to be committed by April 1, but they’ve pushed those commitment dates back, which is a good thing for USC.

Just as Gould is an outstanding cornerback still in USC’s sights, so too is four-star cornerback Earl Little Jr. (Ft. Lauderdale, Fla./American Heritage), who plans to be at USC for this weekend. There are very few surprises still in the mix for him, as Alabama, Florida, LSU and Miami are all seen as top options, with USC looking to make an impact.

Four-star safety Bryce Anderson (Beaumont, Tex./West Brook) made an early commitment to LSU, but backed away from that pledge in late January. Texas is an obvious potential landing spot for the nation’s No. 61 overall prospect, with Alabama, Michigan and Texas A&M involved as well. USC, led by safeties coach Craig Naivar, who had plenty of success recruiting major safety targets to Texas, hopes to pull Anderson away. The Trojans are hoping to land multiple safeties in this class to go with the four that came in the 2021 class.

USC signed three wide receivers in the 2021 class, but that’s going to be an important position for the Trojans in 2022 as well. There are two highly-ranked targets in Southern California, but USC has been increasing its attention on four-star receiver Darrius Clemons (Portland/Westview). The 6-foot-3, 205-pound prospect is the nation’s No. 132 overall prospect and a top-20 receiver. Oregon is chasing him as the in-state school, but Clemons is from Michigan and there are a few Big Ten area teams involved as well, with Michigan State, Penn State and Notre Dame. USC is a real player here as well, as Jackson has done some recruiting of Clemons.

Athlete Clint Stephens (Inglewood, Calif./Inglewood) is set to visit this same weekend, as the 6-foot-1, 188-pound prospect has continued collecting offers ever since USC offered him his first one back in April of last year. Florida, Michigan, Oregon, UCLA, Utah, Washington and others have offered, as the Trojans targeted him early as a cornerback.

Local wide receiver Kevin Green Jr. (Mission Hills, Calif./Alemany) added his name to this weekend today. He’s a smaller, shifty receiver at 5-foot-11, 165-pounds, but the three-star prospect is a playmaker with the ball in his hands. He’s the younger brother of Oregon cornerback Mykael Wright, so the Ducks could be tough to beat if they go all in for Green.

The biggest name scheduled to be in Los Angeles that weekend could be five-star athlete Gentry Williams (Tulsa, Okla./Booker T. Washington). He plays both quarterback and defensive back, but Williams is a cornerback target for the Trojans and checks in as the nation’s No. 19 overall prospect. Oklahoma is the big leader as the hometown school, but USC cornerbacks coach Donte Williams is in pursuit and landing an official visit is a significant win already.

USC is chasing a number of out-of-state defensive tackles in this class and three-star prospect Chris McClellan (Owasso, Okla./Owasso) is a recruit who picked up an offer from the Trojans earlier this month. He’s a 6-foot-3, 290-pound lineman who has seen his recruitment pick up recently. Florida is pushing and the Gators will get a visit in early June. Oregon Florida, Illinois, Missouri, Washington, Michigan, LSU, Oklahoma and Florida State have all offered since mid-February.

Both have been longtime USC targets and have reciprocated the interest. Shor said he’s really developed a strong affinity for the people at USC. The Trojans have four-star offensive lineman Earnest Greene (Bellflower, Calif./St. John Bosco) in their sights as a local option, but grabbing a couple out-of-state tackle prospects looks like a necessity for this 2022 class.