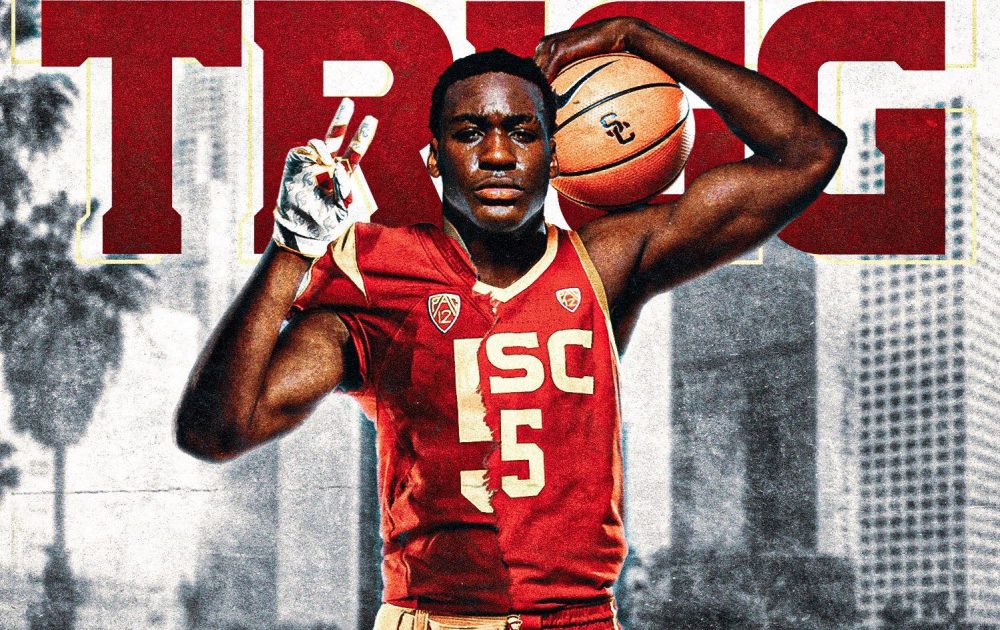 USC finds itself squarely in the picture for one of 2021’s top two-sport athletes, as Michael Trigg (Tampa, Fla./Carrollwood Day) included the Trojans among his top three schools on Thursday afternoon.

The 6-foot-4, 230-pound Trigg is the nation’s No. 152 overall prospect and No. 5 tight end on the football field, and also a talented shooting guard on the basketball court.

Playing both sports in college is a big part of Trigg’s plan, and all three of his finalists–LSU, South Carolina and USC–have pitched that ability during the recruiting process.

While he is listed as a tight end, Trigg is another USC target at the position who is much more of a big wide receiver. While he doesn’t have wide receiver speed, he is a matchup nightmare for defensive backs with his size and ability to play the ball in the air.

USC has an advantage in this recruiting race as the Trojans can point to Drake London as a player who took part in both sports during his freshman season, making a huge impact on the football field.

The Trojans hold a commitment from three-star tight end Lake McRee (Austin, Tex./Lake Travis), but USC has chased a few other tight end targets and looks to be making a real effort to land a second one in this class. The tight end spot has been an interesting one to watch under offensive coordinator Graham Harrell, as the position recorded just 15 catches last season and took a back seat to London, who saw increased time as the fourth receiver throughout the season. But it’s clear the USC coaches would like to stockpile the tight end position with players who can help in the passing and running game, provide formation versatility and create mismatches against linebackers and defensive backs.

Despite two defections this offseason–Daniel Imatorbhebhe to Illinois and Jack Yary likely to Washington–the Trojans seem to have a good handle on the tight end position in 2020 with seniors Josh Falo and Erik Krommenhoek and redshirt freshmen Ethan Rae and Jude Wolfe. But with those two seniors off the roster for the 2021 season, it stands to reason that signing two tight ends in this class, to keep the Trojans at four, would be a good thing for the roster.

Last season while at Seffner Christian, Trigg recorded 82 receptions for 1,232 yards and 16 touchdowns. He also played some quarterback, completing 24-of-38 passes for 242 yards and two touchdowns, and rushing for 195 yards and five scores.

Trigg was a defensive standout as well, tallying 83 tackles, including 24.5 tackles for loss and 11 sacks, as well as an interception returned 94 yards for a touchdown, two forced fumbles, two fumble recoveries and a blocked field goal.

On the basketball court, Trigg averaged 22.6 points, 8.3 rebounds and 3.6 assists per game.