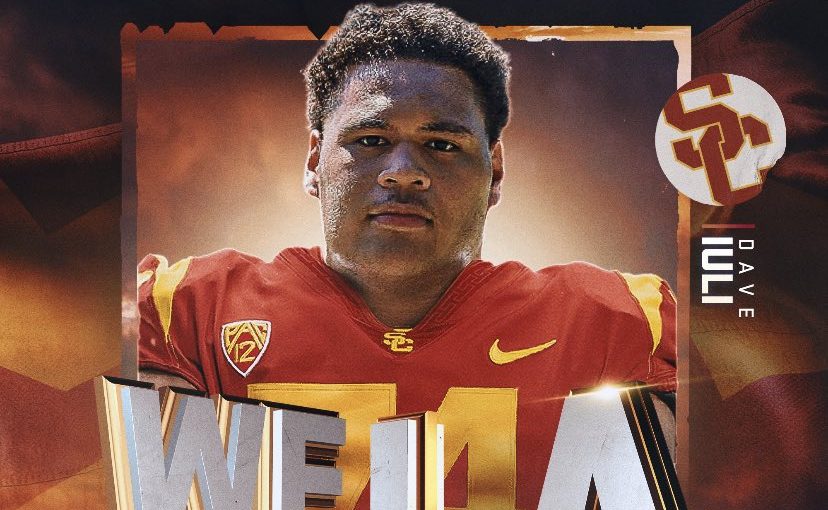 After signing five offensive tackles in the 2020 class and holding commitments from two more in this 2021 cycle, the 2022 class might present a good opportunity for the Trojans to load up with some talented interior offensive line prospect. Luckily for USC, three of the nation’s top 10 guards reside in the Pac-12 footprint. One of those is Dave Iuli (Puyallup, Wash./Puyallup), massive a 6-foot-5, 330-pounder ranked as the nation’s No. 5 guard and No. 209 overall prospect.

USC was slightly late to the game for Iuli compared to his other offers, as the Trojans extended an offer in July, after programs such as LSU and Oklahoma offered in April and the hometown Washington Huskies offered a full year earlier. But the Trojans, led by offensive line coach Tim Drevno, have done a great job in making up ground in their recruitment of Iuli and now sit as a legitimate option for the talented lineman.

The USC came after Iuli’s strong showing at the Giant Skillz OL/DL camp in Orem Utah this past summer, and he and Drevno, as well as other USC coaches, have developed a quick connection.

“Ever since I left that camp, we’ve been keeping in contact and making sure we have a close bond,” Iuli said of the USC coaches, adding that the way they recruit stands out. “The way they keep in contact is definitely one part that stands out. All the letters I received in the mail–all the coaches wrote to me. That’s something that stands out, that they care for you.”

Iuli has approached the recruiting process with an open mind. Having spent the first half of his life in American Samoa and moving to Washington in 2012, Iuli didn’t grow up with a favorite college football team or know anything about college football. He did get a slight introduction to USC when he was able to meet former Trojan and then-Pittsburgh Steeler Troy Polamalu during one of Polamalu’s trips to American Samoa. But it’s a clean slate for Iuli in terms of weighing all his options, and he certainly has options.

Eight Pac-12 programs have offered, including all four in the Pacific Northwest. Stanford hasn’t, but has been in contact. LSU, Oklahoma, Tennessee and Texas A&M are his big offers outside the Pac-12. All of this attention has come for Iuli despite the fact that he didn’t play at all during his sophomore year, due to injury. His freshman film and camp performances have been good enough for teams to sign off on offering him.

While he’s a good-natured, soft-spoken, happy-go-lucky person off the field, you’d be hard-pressed to find a defensive tackle that describes him as anything close to that. Iuli said one word consistently comes up when coaches talk to him about his play on the field.

“It’s my aggressiveness,” he said. “A lot of coaches said I have the mentality, the power, strength, and aggressiveness. They say I’m really aggressive and it looks like I want to kill somebody.”

To this point, he’s only been able to visit Oregon and Washington, but said USC is a school he will definitely visit once the extended dead period finally ends. In addition to the coaches, Iuli said USC’s history in sending offensive linemen to the NFL is something that caught his eye about the Trojans.

But USC will have plenty of competition from Washington, as the Huskies have made Iuli another in-state priority. Washington is a program that has played the “Hometown Hero” card with a lot of in-state prospects and it has started to work a lot more often over the past few classes. Iuli has noticed.

“They talk to me a lot about that,” he said of staying home for college. “Keeping those guys home is a big deal…But I have to choose a school that is right for me.

September 1, the first day coaches were allowed to initiate correspondence with 2022 recruits, was a big day for Iuli, and his scheduled has been impacted since then. He said he’s talked to at least two or three coaches every day since then, and Drevno has often been one of those.

“He’s been one of the guys contacting me a lot,” Iuli said of the USC assistant. “The bond me and him have is really great. His style is really good because if he does care about you, he’ll keep in touch with you. He’s done a great job.”

As for a commitment timeline, Iuli said he’s happy to wait until at least after his junior season. Right now, he’s focused on preparing for his junior season, which is set to start in early 2021, and taking the recruiting process slowly but seriously.

“You can never take anything for granted because not everybody gets to be a student-athlete,” he said. “I never thought I would get to a point like this. I thought maybe a couple schools might offer me. Either way, I’m grateful for it. But a lot of offers means that I have to keep working way more than anybody else.”

In addition to Iuli, both Earnest Greene (Bellflower, Calif./St. John Bosco) and George Maile (South Jordan, Utah/Bingham) rank among the top 10 guards in the nation, with Greene checking in at No. 2 and Maile in at No. 10.