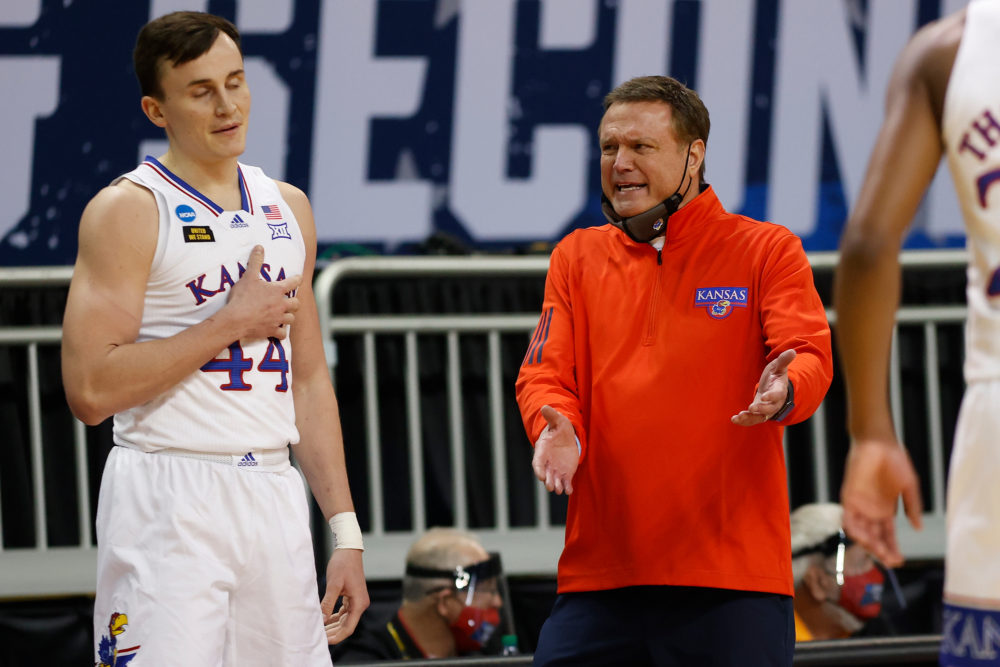 Long time power Kansas stands in the way of USC advancing to next weekend’s Sweet 16. Monday’s game against the Jayhawks presents a considerable challenge and a big opportunity. The Trojans remain a one point favorite over third seed KU, which may be explained in part due to the uncertainty over whether KU’s leading rebounder, Jalen Wilson, will be cleared to play after a Covid quarantine and how effective he can be.

This KU team is not as strong as many Jayhawk teams over the years and lacks the usual star power. Point guard Devan Dotson and big forward Udoka Azubuike are gone from last season’s team. KU had won 14 consecutive Big 12 regular season titles until the streak was broken in 2019. The Jayhawks finished 12-6 that year in conference play, two games behind Kansas State and Texas Tech.

The Jayhawks bounced back last year behind Dotson and Azubuike and won the regular season title at 17-1. This year was a big drop off; Baylor won the title and the Jayhawks finished second at 12-6, followed closely by Texas and West Virginia at 11-6.

This season KU is currently 21-8, but the Jayhawks are only 5-6 away from home. The Trojans are 23-7 and 10-5 away from Galen. Coach Bill Self’s teams score a lot of points and this year averaged 73 ppg and 38 rpg. The Jayhawks shooting is a bit lower than usual; they have made 44% of their shots, 34% from three and 71% from the line. They play aggressive defense, look for steals and fast breaks and take care of the ball.

Which Was The Bigger Surprise

There were two very good and unusual statistics in the win over Drake. It’s a tough call which was more surprising. Tahj Eaddy had 10 assists, double his previous season high. Isaiah Mobley made his first six shots from the floor including a three and finished 6-7, missing a late three point attempt, and he also was 2-2 from the line

Which was more surprising? I’d say “both”, and hope they can both duplicate their performances against KU.

A Deep Look At The Jayhawks

KU’s best big man, David McCormack, played Saturday after his quarantine period and KU needed him. He is a 6’10”, 265 pound junior forward. He was the second leading scorer and rebounder this season averaging 13.7 points and 6.2 rebounds and also averages a block per game. McCormack made 51% of his shots and 80% from the line this season. He also made his one three point attempt.

6’8”, 215 pound freshman forward Jalen Wilson’s availability for Monday’s game has been listed as “likely” by KU. He is scheduled to complete his quarantine period on Sunday. Wilson averages 12.1 points and a team leading 8.2 rebounds. He makes 42% of his shots, 33% from three, and 62% from the line and has been projected to be a future first round draft pick.

Tristan Enaruna will still be in his quarantine period and not available until next weekend at the earliest. He played 10 minutes a game as a key rotation player but averaged only 2.8 points.

After struggling in January KU played much better down the stretch. In their last dozen games before the Tournament they had three good wins, beating Oklahoma State at home by 12, getting a huge win aver Baylor at home by 13, and beating Oklahoma by 7 in Kansas City in the first round of the Big 12 Tournament before withdrawing with Covid issues.

The last stretch was enough to advance Kansas from unranked to 12th in the final AP poll last week. In part the big jump was based on KU’s basketball history.

The Jayhawks trailed most of the game before pulling away in the last minutes for a 93-84 win. Getting McCormack back was a big factor. He scored 22 points though he struggled against EWU on defense. The brother combination of Tanner and Jacob Groves both had career highs and they totaled 58 points between them.

The pluses for KU they shot the ball well, limited turnovers, shared the ball and got second chances with offensive rebounds. Conversely Self must be concerned about their poor defensive performance, especially inside, and how they will defend the taller Trojans.

And The Outcome Will Be

USC can win this game. The Trojans will likely need Evan and Tahj to score and Isaiah Mobley and Drew to have good games. Neither team has had success from the line over the course of the season but the Trojans can’t allow KU a big margin from the line. USC will get to the line and must do better than Saturday night. They will also need to rebound well and outplay McCormack and Wilson inside on both ends. In other words the Trojan team will need a good all around effort to win.

USC is the bigger team inside and at the wings. Their challenge will be to control McCormack’s big body like they did with Drake’s big man. Self will have a plan to deny Evan the ball and easy shots but the seven foot freshman is playing much more aggressively on offense in the last few weeks. If older brother Isaiah can score it will increase KU’s defensive problems. Good outside shooting will make it harder for the Jayhawk guards to sag inside against the Mobleys.

A close game is expected but I think either team can win by double figures if they shoot the ball well and shut down the opposition. USC is the better defensive team and will switch between a man and zone defense depending on how the KU offense is playing. I think the Trojan defense will be the difference. Let’s go to the sweet 16!