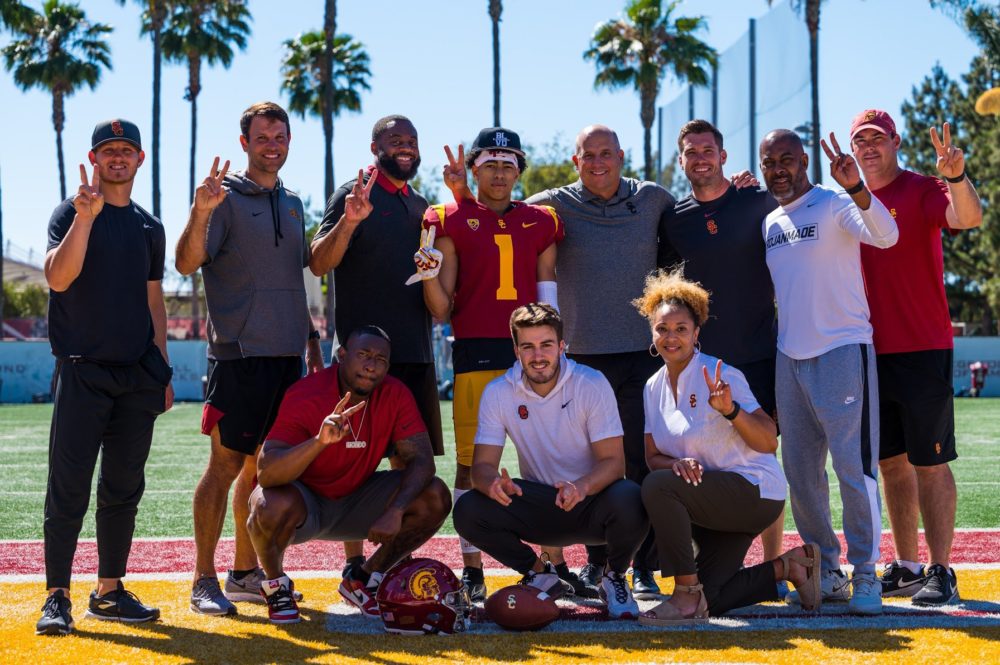 USC is looking for a handful of wide receiver additions in the 2022 recruiting class and while some top targets live fairly close to campus, the Trojans are after some national prospects as well. Four-star prospect Isaiah Sategna (Fayetteville, Ark./Fayetteville) is one of those and he was on campus this weekend for an official visit.

The 5-foot-11, 170-pound receiver is the nation’s No. 224 overall prospect and a two-sport star as a standout track and field athlete who competes at a high level in the long jump, hurdles and other events. His recruitment has been interesting of late. Sategna committed to Texas A&M in March, took an official visit to the Aggies in early June and then announced his decommitment just before heading to USC for his official visit.

The trip was the first time Sategna had ever been to California.

“I knew I would like it a lot, but I liked it even more than that,” Sategna said of his experience in Los Angeles and with the Trojans.

He said the coaching staff made a huge impression on him, especially in how close they are and the feeling of family he got from everybody in the program.

Sategna said he’ll release a list of final schools in the very near future, but wasn’t ready to say how many schools will make the cut. The expectation is that USC will be listed.

“That’s one of my top schools now,” Sategna said of USC.

But he won’t rush into a commitment. After already committing and pulling back from that, he wants to make 100% certain that his next commitment is his last. So he’ll spend plenty of time going over all of his options, which might include Arkansas, where his dad was an assistant track and field coach until this past May, and Oregon, which has a great combination of football and track.

At USC, Sategna said he hit it off with wide receivers coach Keary Colbert and very much appreciated the fact that Colbert is young and has played the position fairly recently. He’s able to get involved in practice and can show how to run routes and work in the offense in addition to just teaching it. Sategna said USC pushes its receivers to learn both the inside and outside positions, which he sees as a bonus. He said he just plays on the outside right now, but has played inside before that.

Satenga plans to run track in college. He said he’ll likely participate in the long jump and the 110 hurdles, as well as potentially the 100m and relay teams. He got to visit the track stadium, but he wasn’t able to meet during the visit with new USC Director of Track and Field Quincy Watts, who is at the Olympic trials with a number of Trojans competing for spots on the olympic team.

USC is hosting nearly double-digit visitors this weekend, but Satenga arrived on Thursday and got his visit started a little early. Still, he was able to meet several of the other visitors and said he hit it off with four-star offensive lineman Dave Iuli (Puyallup, Wash./Puyallup). Satenga was hosted by incoming freshman cornerback Prophet Brown and said he got along well with everyone he met on the team.

The Trojans hold a commitment from three-star wide receiver Kevin Green Jr. (Mission Hills, Calif./Alemany) and have added a few other pieces to the position this offseason, with incoming transfers K.D. Nixon and Tahj Washington, in addition to incoming freshmen Kyron Ware-Hudson, Michael Jackson III and Joseph Manjack IV. USC appears to be in a good spot with four-star wide receiver Tetairoa McMillan (Anaheim, Calif./Servite), but it’s looking like an uphill battle for four-star prospect C.J. Williams (Santa Ana, Calif./Mater Dei), who is looking hard at Notre Dame, Stanford and Texas.