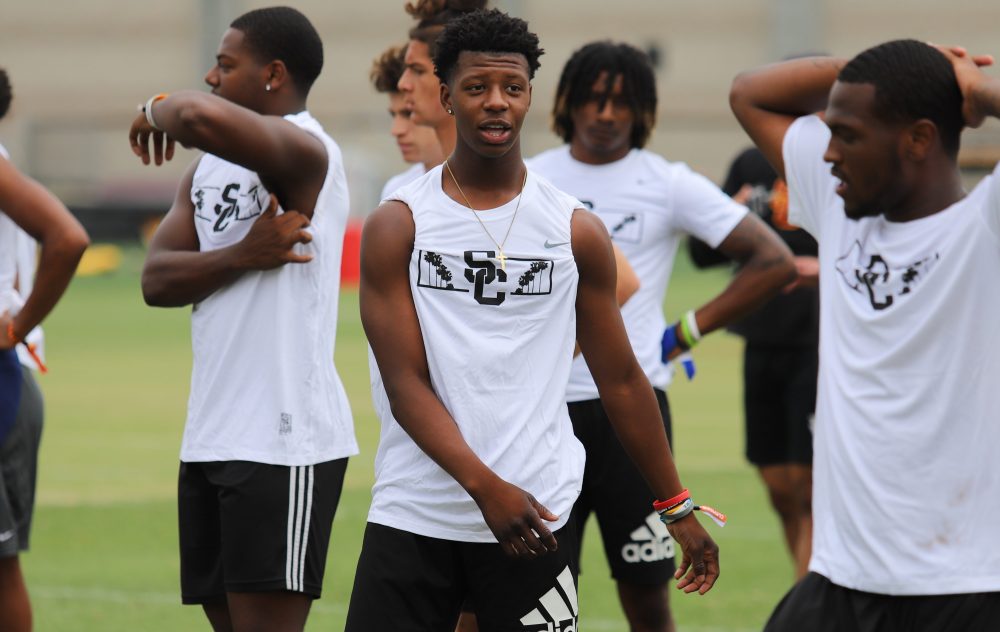 It’s already abundantly clear that new USC cornerbacks coach Donte Williams has had and will continue to have a major say in the recruiting success of the Trojans. He’s helped land several prospects and gotten USC involved in plenty of others in this 2021 recruiting class. What remains to be seen is how the cornerback recruiting in this class will shape up.

The 6-foot-1, 165-pound Davies is the nation’s No. 100 overall prospect and No. 10 cornerback. Just as importantly as far as USC is concerned, he attends Mater Dei High School, where the Trojans have historically had plenty of success pulling players. In the 2018 class, USC signed quarterback J.T. Daniels, wide receiver Amon-Ra St. Brown and linebacker Solomon Tuliaupupu. In 2019, the Trojans landed Bru McCoy.

But other Pac-12 programs have been on a mission to target Mater Dei, and Oregon is a school that has had as much success as anybody there over the past few seasons. Likewise, Arizona State–with new defensive backs coach Chris Hawkins–used its California-connected coaching staff last season to snag several of California’s top prospects. Head coach Herman Edwards’ history in the NFL and as a defensive backs carries a lot of weight with prospects at that position, so the Sun Devils will likely be right in the thick of the race for Davies.

Ohio State is on the list for obvious reasons, as the Buckeyes have been the recent “DBU” when it comes to putting defensive backs into the league, high in the NFL Draft.

The cornerback spot is an interesting one for the Trojans in this class. USC didn’t sign a single cornerback in the 2020 class, so clearly there is a need there. But the Trojans loaded up with defensive backs in the 2019 class, as Chris Steele, Dorian Hewett, Adonis Otey, Jayden Williams and Max Williams all wound up at cornerback last season.

USC has several clear cornerback targets in this 2021 class remaining on the board and uncommitted. Four-star athlete Nathaniel Wiggins (Atlanta/Westlake) looks as though he could be a big piece of this class. The Trojans are also in pursuit of four-star cornerback Ceyair Wright (Los Angeles/Loyola)–the top defensive back in the state–and recently landed on the top-five list of four-star athlete Denzel Burke (Scottsdale, Ariz./Saguaro).

USC landed just one of the top 20 prospects in the state of California in the 2020 class. In the 2021 class, the Trojans already hold verbal commitments from five of the top 20, and are in the mix for as many as eight more.