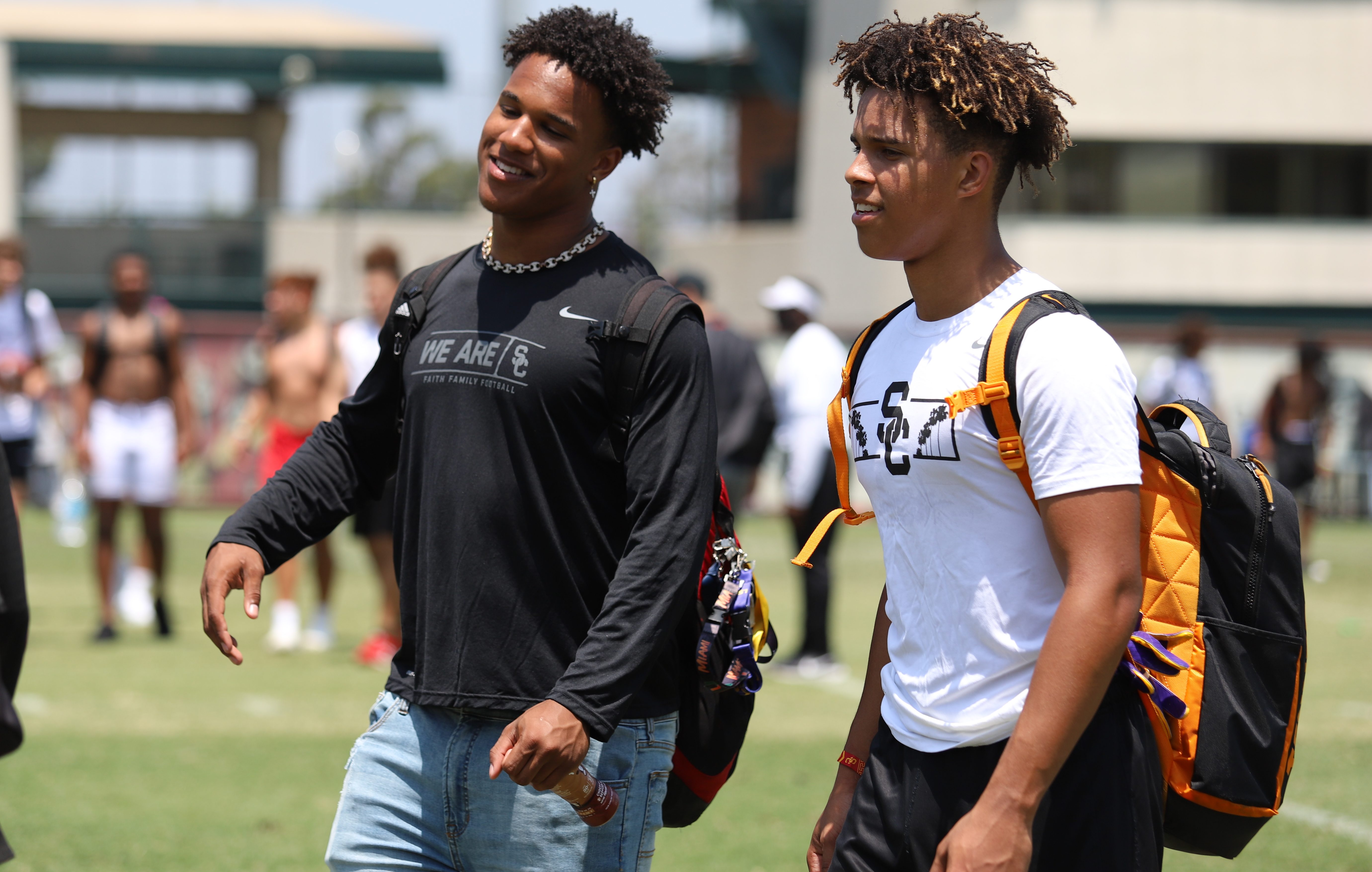 USC is hoping that when head coach Clay Helton addresses the media on Wednesday, the first day of the early signing period for the 2020 recruiting class, he’s talking more about the destination than the journey.

This recruiting class has largely been viewed as a disaster when it comes to comparing it to USC’s standards. Normally, questions surrounding USC as signing day approaches are whether the Trojans will do enough that day to secure a top-5 class nationally. This year, USC’s class sits at No. 81 nationally, and No. 11 in the Pac-12. It’s a strange year when USC falls out of the top two classes in the Pac-12. It’s literally unheard of in the internet recruiting age for USC to be out of the top half of the conference.

But already, Helton will be able to say on Wednesday that USC addressed some important issues with this class. The offensive line was a clear need and the Trojans have done well there. It wasn’t a strong class in the state, but USC holds a commitment from four-star lineman Jonah Monheim (Moorpark, Calif./Moorpark) and three-star tackle Andres Dewerk (Los Gatos, Calif./Los Gatos). USC went into Arizona for Andrew Milek (Phoenix/Brophy Prep), Washington for Caadyn Stephen (Camas, Wash./Camas) and Texas for Courtland Ford (Cedar Hill, Texas/Cedar Hill) and Casey Collier (Mont Belvieu, Texas/Barbers Hill. All are three-star prospects, but each checks in at 6-foot-5 and 295 pounds or bigger. It can be argued that the Trojans didn’t load up with elite talent here the way they have in the past, but it’s easy to see what the USC coaches liked in each of these prospects. And ultimately, bringing in this quantity will help the line moving forward.

The Trojans will sign Parker Lewis (Scottsdale, Ariz./Saguaro), one of the nation’s best kickers. Landing a pair of in-state defensive tackles in Kobe Pepe (Bellflower, Calif./St. John Bosco) and Jamar Sekona (Greenbrae, Calif./Marin Catholic) is a positive step at that position, as the Trojans will need bodies to develop there with the eligibility clock ticking for Jay Tufele, Marlon Tuipulotu and Brandon Pili. And landing local receiver Joshua Jackson (Harbor City, Calif./Narbonne) continues the influx of skill at that position. But ultimately, those are three-star prospects that won’t move the needle much for fans who follow recruiting anywhere from extremely closely to not at all.

But the look of this class could all change Wednesday, and Helton could be delivering news that USC fans have been waiting to hear. USC has hosted a few big official visit weekends in December, and had its biggest visitor of the recruiting cycle on campus just this past weekend.

Without overstating things, five-star linebacker Justin Flowe (Upland, Calif./Upland) would singlehandedly save this class from a perception standpoint. He’s the top player in the state and an instant impact player for any program in the country. While Clemson was viewed as the strong leader as soon as USC faded from the picture fairly early in the process, Oregon has picked up a ton of momentum recently. But USC got Flowe on campus this weekend for an official visit and took its best shot.

Flowe will announce his commitment on ESPNU at 11 am PT on Wednesday. If he does select USC, it would be an absolutely massive win for the Trojans — not just to add a player of Flowe’s athletic ability, but Flowe would undoubtedly help USC with other recruits in this class and the next, and an announcement to Oregon would give the Ducks another boost in Southern California.

In addition to Flowe, USC also hosted Cal linebacker commit Muelu Iosefa (Mililani, Hawaii/Mililani) and Arizona defensive end commit Regen Terry (Florence, Ariz./Florence), as well as four-star cornerback Dwight McGlothern (Spring, Texas/Klein Oak). But a bigger note was that Flowe was spotted along with four-star wide receiver Gary Bryant (Corona, Calif./Centennial) at the USC basketball game on Sunday evening. Bryant already took his official visit to USC, so the Trojans getting him on campus again this past weekend was a significant accomplishment. Bryant is the nation’s No. 57 prospect and a guy who could fit in immediately and develop into a star in this USC passing attack.

The Trojans also received a December official visit from tailback Michael Drennen II (Dublin, Ohio/Dublin Coffman), and while Kentucky appears to have the lead for him, the Trojans will see if a late push is enough. Cornerback Darion Green-Warren (Harbor City, Calif./Narbonne) and LV Bunkley-Shelton (Gardena, Calif./ Serra) are targets, though Michigan and Arizona State have become serious players for them following visits.

Defensive linemen Tuli Tuipulotu (Lawndale, Calif./Lawndale), Alec Bryant (Pearland, Texas/Shadow Creek), DeShawn Lynch (Folsom, Calif./Folsom) and Xavier Carlton (Draper, Utah/Juan Diego) were all targets up front. USC offered Bryant late, but he took an official visit to Virginia Tech this past weekend. USC sent nearly its entire defensive staff to visit Carlton in December, but the Trojans look to be on the outside looking in for him, with Utah in the lead.

USC needs a strong finish to this class — though Wednesday marks just the beginning of the early signing period, and there is still February’s regular signing period as well as the transfer portal, which is always open, to add players and recruits — to start generating some positive momentum for the program. Finishing Wednesday without a marquee prospect in the class or announcing a recruiting class that sits firmly in the bottom half of the conference won’t do anything to charge up a fan base in need of a boost.

But with USC, there’s always a chance for a strong close to signing day, and the Trojans need to find a way to do it again this year.