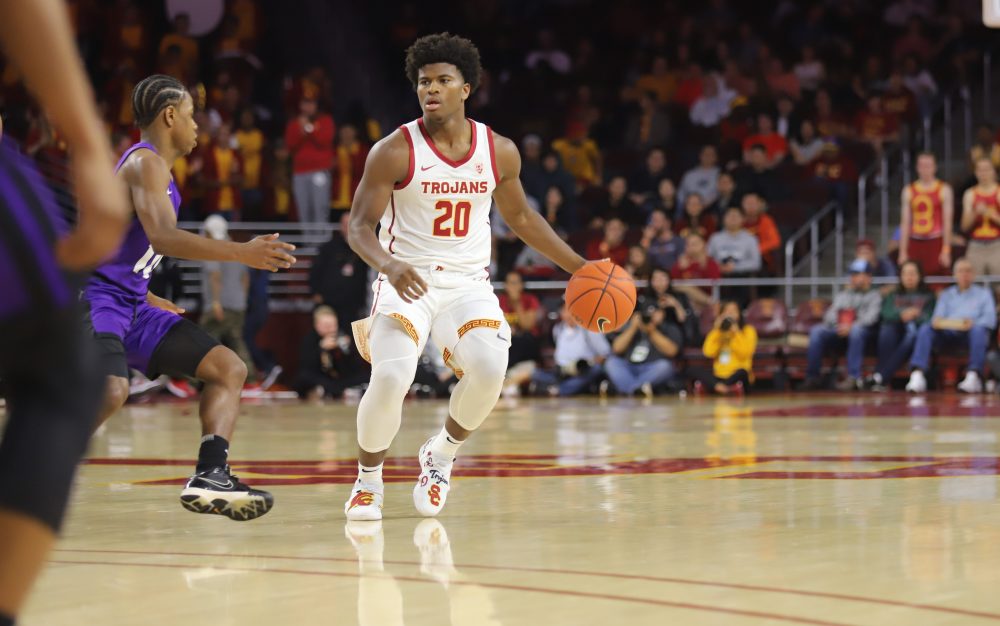 Coach Enfield‘s Comments About Individual Players And The Team

All of the players are healthy and the team has been progressing over the past week. From the outset of practice the staff has been working on the team’s identity and the new guys have completely bought in. The players have put their personal goals aside and the practices and scrimmages have been very competitive.

Ethan Anderson has improved his decision making and Enfield is looking for Ethan to score more this season.

Drew Peterson’s status whether he may play this year is still to be determined. Drew is great at moving the ball and seeing the whole court and he also shoots the ball well.

Freshman Boubacar Coulibaly has been a pleasant surprise. He plays with tremendous energy and can impact the game with his rebounding especially at the offensive end.

The staff has been surprised that Evan Mobley is such a good passer. In their five-on-five scrimmages he leads the team in assist to turnover ratio with 37 assists and 12 turnovers, which is slightly better than Ethan’s ratio. Both of the Mobley brothers pass the ball as well as most guards.

Evan is able to gather almost any pass at the rim and finish with either or both hands. One play which stood out started with Evan on defense near the basket. Tajh Eaddy went up for a jump shot at the top of the key and Evan was able to get close enough to block the shot volleyball style with both hands and gather the ball and dunk on the other end after one dribble.

Evan has very good anticipation and he is enthusiastic about getting better. He is a great teammate and knows he is not a finished product. He can make shots from three and will help open the court.

Three years ago with Jordan McLaughlin, Jonah Mathews and Elijah Stewart out front the Trojans were a very good zone team.  Last season they did not play zone defense very well and played almost exclusively played man defense and were a good defensive team. In part because the Trojans have great length and energy they will try some zone in the early games to get a feel for how well this team can play zone.

If an opponent plays three guards it is likely that Ethan, Tajh and Noah Baumann will match up on defense some of the time. Isaiah White is very fast and quick and can cover a guard and Max Agbonkpolo can also defend guards.

Ethan’s increased maturity and self confidence was apparent the first time he spoke today. Last year he tried to answer questions in as few words as possible. He is clearly more confident in talking to the media and provided a lot of thoughtful answers and information.

Ethan talked about how the difficult spring and summer when there was great uncertainty whether there would be a season. He spent the summer at home which was tough at times. The outdoor conditioning the Trojans began in August was rough. The players wanted to be in the gym. Not many of his teammates have played together and Ethan and three or four players got together a number of times in the Summer to learn each other’s game. He especially worked a lot with the Mobley brothers.

Evan is an amazing player. Ethan worked hard on his jump shot and both Mobleys can find him when he has an open opportunity.  The three shared the same strength and conditioning trainer this summer and they all worked hard to get into better shape. Ethan believes he will be in much better condition to help close out games.

His attitude when practice began last year was to earn everything he got. He started out putting his energy into defense and also wanted the coaches to know that he would do whatever would help the team. He had not played a lot of point guard before last year and had a steep learning curve.

Ethan leaned on seniors Jonah Mathews and Daniel Utomi. They helped on the offensive end and Associate Head Coach Jason Hart worked with him to make things simpler. Hart played in the NBA and has been a great resource for Ethan. He gives Ethan tips every day and they work on the finer details. He has helped Ethan to get the best shot possible for the Trojans on each possession.

Ethan is much more confident with his jump shot than last season. He won’t hesitate to take the open shot. He has expanded his game in part by better understanding the “mental aspects of the game” and the game has slowed down for him. He found it “kinda weird” last year when he was asked to lead as the point guard while playing with experienced teammates. He is finding it much easier to lead now.

It’s been very challenging to complete the non conference scheduling. The Trojans lost their game at Florida Gulf Coast, the neutral site game against Gonzaga and the game at Kansas. (It has been reported that the home and home series with Kansas has been pushed back one year). They are in the process of finalizing the contracts for the final two non conference games and Enfield expects the schedule to be released soon. The opening game may be against Cal Baptist, which “had a very, very good season last year.”

Ethan was asked about the new weight room in Galen, which came from a donation by DeMar DeRozan. He said that it is a spectacular facility and the Trojans have alumni who have a great love for the school and provide tremendous support. Enfield said that he has known DeMar since DeMar was a sophomore in high school and Andy tried to recruit him while he was an assistant coach at Florida State. DeMar visited FSU and Andy came to Compton High School a couple of times to try to sign DeMar.