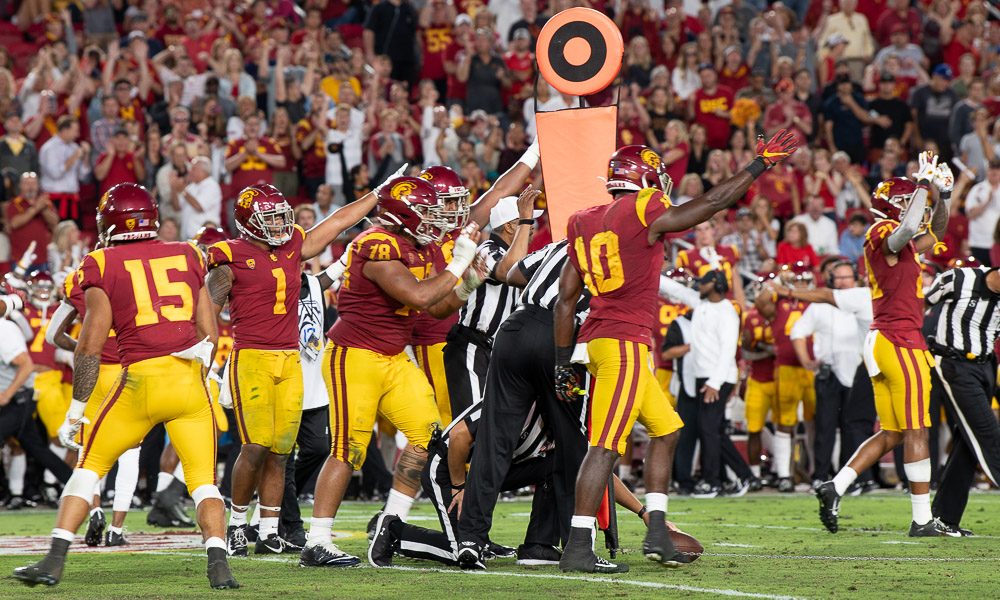 USC will have a different defensive look this fall. Now, the Trojans hope that different look produces different results.

“We are excited to have Todd join our Trojan football program,” said USC head coach Clay Helton.  “He is an experienced and successful defensive coordinator who has made an impact everywhere he has coached.  He brings a passion, energy, toughness and discipline to his coaching and those characteristics were evident in our discussions.  His defensive system poses an extreme challenge to offenses.”

He takes over a USC defense that finished 78th in total defense, 72nd in rushing defense and 96th in passing defense. But those numbers were actually a step up in places from what Texas did in 2019, as the Longhorns finished 97th in total defense, 45th in rushing defense and 127th (out of 130 teams) in passing defense. Looking at some further statistics, Texas intercepted 12 passes compared to USC’s nine, but the Trojans tied for 28th in the country with 2.69 sacks per game, while the Longhorns managed just 27 total sacks, good for 69th on a per-game basis. Texas was a little better on third downs defensively than USC, as the Longhorns ranked 63rd in third down stop percentage and the Trojans checked in at 83rd.

Like USC, Texas dealt with an absurd number of injuries during the 2019 season, starting at least one game without half its defensive starters. Still, Texas was one of the worst teams in the country when it came to missed tackles, and the pass defense was UCLA-level abysmal.

Orlando doesn’t immediately appear to be an inspired choice, as he was booted out of Texas after the Longhorns imploded defensively in 2019. But he makes some sense, and was one of the names I listed when we looked at potential replacements for Clancy Pendergast back in December. He has made several stops during his career, so he’s comfortable putting his scheme in place quickly. He also has a history of getting productive years in Season 1 of his tenure. At Texas in his first year, he took the defense from 94th to 41st in total yards allowed per game, and from 90th to 29th in scoring defense.

Back in 2018, Texas senior cornerback Kris Boyd, asked about Orlando’s system, said, “Just run to the ball and hit.”

Players and coaches rave about Orlando’s defensive aptitude and his ability to put schemes and looks together on the fly. While he’s most comfortable with a 3-4 front, he’d traditionally run a 4-3 front until arriving at Utah State in 2013. With spread offenses and the air raid putting pressure on secondaries, Orlando shifted to the three-down look, but has consistently built his reputation with constant blitzing and pressure packages that force quarterbacks to read and adjust. He’s even worked with packages that utilize just one defensive lineman.

Orlando also believes in very physical practices, so that will definitely be something to keep an eye on as he takes over at USC. The Trojans have not been known for overly physical practices the past few years, and rarely tackle to the ground for long periods.

“If you practice soft, you’re going to play soft,” Orlando told 247 Sports in 2018, adding that he helped change the way Texas practiced to make it more physical.

Early during one spring ball at Texas, Orlando said some of the biggest things he wanted to work on with the Longhorn players were “stamina, training and communications.”

“All of those things are at not Xs and Os,” Orlando said. “That’s the biggest part we’re working on – being able to go hard all the tie, to be able to be physical all the time, to be able to communicate all the tie. Those are the things that give you a chance to play good defense.”

It will also be interesting to see what Orlando does with USC’s defensive personnel. He will have plenty of linebacker talent to work with, as the Trojans can go four-deep pretty easily there and Orlando should be able to find a dynamic pass rusher in that group to play his “Rover” position. But he also has a potential All-American candidate in defensive end Drake Jackson. If he has a difficult time adjusting to playing more inside in a three-down look, would Orlando leave him there or find a new way to help Jackson make an impact. Of course, there’s also the possibility that a move slightly inside, complete with constant blitzes coming from behind him and keeping the attention of the offensive linemen, could create a shorter path to the quarterback and more success for Jackson.

Orlando will also have safety Talanoa Hufanga to utilize in the secondary, and it’s easy to see the junior-to-be becoming a devastating blitzer in Orlando’s scheme.

Orlando defenses also usually have success against the run, something the Trojans struggled with at times this season. Texas was terrible against the run in 2015 and 2016, but the Longhorns jumped to eighth in the nation in his first season at Texas.

Where Orlando defenses have faltered, according to both stats and fans at his various stops, seems to be when the defense gets too complicated or asks players to do too much—like a safety blitz on third and long where pressure doesn’t get to the quarterback on time. In fact, the 2019 season might have hinged on a third-and-long that Texas couldn’t stop against LSU with 2:38 left in the game. Texas rushed six and had a seventh defender spying quarterback Joe Burrow. But at the snap, just four Texas had just four defenders within four yards of the line of scrimmage. The five Texas defenders in the secondary couldn’t stick with the four LSU receivers and the Tigers scored on a 61-yard touchdown.

We’ll see how USC defensive backs, including Olaijah Griffin, Chris Steele and the rest, adjust to this defense that will ask them to hold up in coverage long enough for the rush to get home. A Texas secondary dealing with youth and inexperience failed time and time again at that in 2019. But this USC secondary seemed to grow up quickly last season, and should be seen now as a strength heading into 2020. That could come in handy with Orlando’s 3-2-6 dime package that he’s used at times. Defensive backs such as Greg Johnson, Chase Williams, Briton Allen and Max Williams have seen time at multiple positions and could be pieces that will be utilized in different ways this coming season.

Ultimately, this looks like another wait-and-see hire, complete with immediate pros and cons. While it’s clear that Orlando wasn’t the first choice—former Trojans Joe Barry and Kris Richard, among others, were in various levels of discussions about the position—Orlando has plenty of experience as a defensive coordinator. And while he was used to working with lower-ranked prospects at his stops at FIU, Utah State and Houston, his Texas tenure—and facing those Big 12 offenses—should prepare him well for USC and the Pac-12.

What’s certain is that he’s found success in his first year inheriting a veteran defense, and that’s exactly what’s waiting for him on Howard Jones/Brian Kennedy Field.