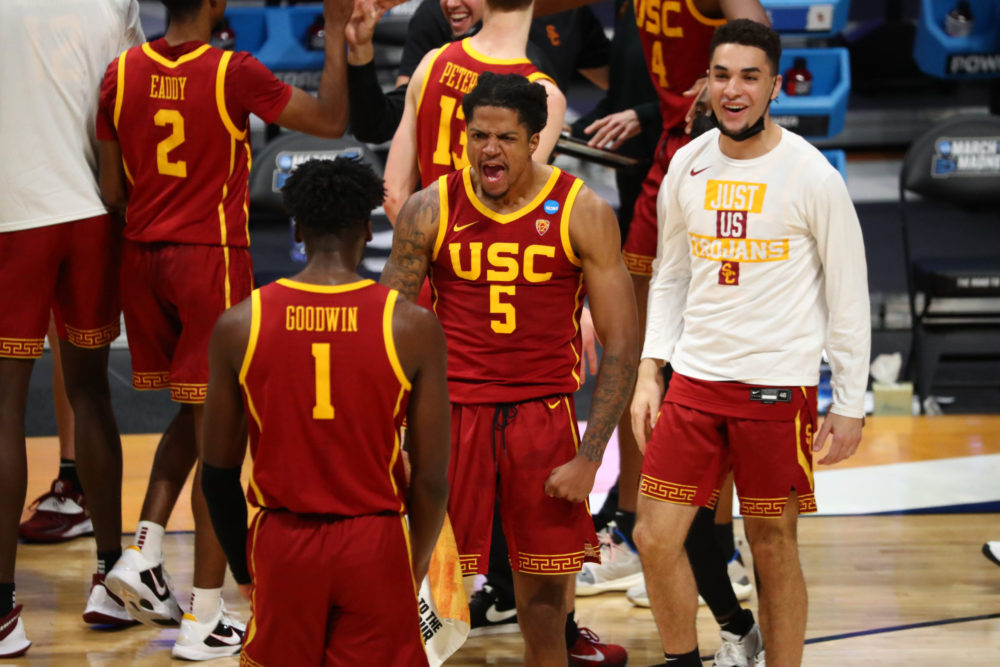 The point spread had turned in the Jayhawks’ favor with Kansas established as a one point favorite at the tip. That turned out to be the only thing in their favor Monday night, as USC rolled to a historic 85-51 win over Kansas.

The Trojans’ offense started slowly and they had only 12 points at the 12:43 mark. The defense, on the other hand, was superb throughout the game and at that point USC led 12-3.

Isaiah Mobley led the first half offense barrage that started the Trojans rolling. He made four straight shots from beyond the arc in the first half while the defense held KU to 8-31 from the floor. The Trojans turned an eight point lead with seven-plus minutes left in the half into a nineteen point half time lead. KU made a few shots early in the second half but it was soon all USC.

The Trojans are now 24-7 and are ranked number 6 in the Ken Pom computer rankings after all of Monday’s games. Four of the five teams ranked ahead of USC are also in the Sweet 16. The USC record for wins in a season is 26 and for the Trojans to be approaching that record in a season in which four less games were played due Covid protocols is a great accomplishment.

Isaiah Mobley said: “I think we can carry this momentum and make a deeper run”.

He added that this success is what he and Evan dreamed about and added that he is “playing with an extra chip on my shoulder” for the alums and fans who couldn’t follow the team into the post season last year.

Coach Enfield said that he was most impressed with the Trojan defense. They have held both Drake and KU to under 30% from the floor which he labeled a tremendous accomplishment.

The Trojans switched from a man to a zone defense for stretches but it didn’t seem to matter. The Jayhawks made only 18-61 (29%) of their shots and 6-25 (24%) from three. The Trojan length gave Kansas few opportunities inside and the perimeter defense was also outstanding. The players KU relied on all season to score couldn’t find open shots.

Leading scorer Ochai Agbaji made only 3-13 from the floor and 2-8 from three.

Big man David McCormack who played so well on Saturday in his first game back from Covid quarantine only took four shots, making two. Enfield said that Isaiah Mobley is the Trojans’ best interior defender and he was on McCormack most of the game because of McCormack’s size at 265 pounds.

Jalen Wilson, KU’s leading rebounder, rejoined the team Monday morning after his quarantine and was a non factor, missing his three shots. Christian Braun had a big game against Eastern Washington in the first round but made only 2-9 shots and 1-6 from three. The only Jayhawk who had any success on offense was Marcus Garrett. He made 6-15 shots, which on this night wasn’t a factor.

Enfield said: “McCormack is the best back to the basket center we played all year.” He added that the Trojans defense did a great job denying him the ball. Isaiah said: “I knew we had to run him out. We’re friends and I knew he was just off Covid quarantine.”

If the Trojan defense was more impressive than the offense it had to have been really special because the offense was great. USC made 32-56 (57%) of their shots, and an incredible 11-18 from three. The only negative stat was the usual poor shooting from the line, 10-17.

In the post season Isaiah made 9 threes in a row before a second half miss. He led the team with 17 points and added 8 rebounds. Evan took only six shots, making four and finished with 10 points. He added 13 boards, 5 assists and 3 blocks and his presence intimidated KU throughout the game. Chevez Goodwin also scored 10 points and Enfield called the play of the three front court players “tremendous.”

Enfield added that Evan gets the focus from opposing teams; Isaiah doesn’t have the same length and explosiveness but he has been very good and has greatly improved his offensive game over the course of the season.

“They were playing off me,” Isaiah said. “I’ve been shooting well and if they give me opportunities from three I’m going to take them.”

He added that the team does an excellent job of getting he and Evan good looks and when that happens it helps get everyone rolling.

“When we’re rolling we’ll be a hard team to beat.”

Isaiah White scored 13 points on 5-7 from the floor and 3-4 from three. He made a circus basket on a drive to the rim after a hard foul.

Drew Peterson didn’t have a great game shooting the ball, finishing with 5 points on a three and two free throws, but he contributed 8 rebounds.

The point guards both had big games. After a slow start Tahj Eaddy finished with 12 points on 5-12 from the floor and 2-5 from three. He also grabbed 4 rebounds and dished out 3 assists. Ethan Anderson had his best offensive game in a few weeks making 4-5 shots and scoring 9 points.

Oregon Is Up Next

Leave it to the NCAA. With five PAC 12 teams in the Tournament they decided that two regions should have two conference teams each, and one would not have any. Enfield said that it would feel unusual to play Oregon in the Sweet 16, but Isaiah was more blunt: “Oregon stole a Pac 12 championship from us.” He is definitely looking forward to playing the Ducks again.

Four of the teams in the Sweet Sixteen are from the Pac 12. With the USC- Oregon matchup at least one team will play in the Elite 8. Isaiah said that he definitely has been following what the other conference teams have been doing. “Our conference has been a little bit disrespected during the year and we’re showing what our teams can do.”

After the game Enfield had an interesting take: “I want to thank CBS. Two of their analysts said today that USC basketball and Andy Enfield teams are too undisciplined and they picked Kansas. Think how good we’d play if we were disciplined.”

At the outset of the post game media conference Enfield said that he had dedicated this win to his father who passed away last year. His mother sent him a photo of his dad right before the game. He also made a point of emphasizing how much the assistant coaches have contributed to the team’s success and said “The fact that Jason Hart isn’t a head coach is a joke.”

The players and staff are isolated in their own rooms every day except for team meals, meetings and practices. Enfield and Isaiah both said that it is boring at times but that is what is required this year. Isaiah added that school work helps pass the time.

For those of us who believed that in order for USC basketball to take the next step they needed to make the Sweet 16, it is mission accomplished. Enfield said that”our goal is to make USC a top 25 program” and noted that they are highly ranked this season. He answered a question about pressure to win by saying there is pressure everywhere, and especially in LA. He said ‘We’re extremely proud of where we are in USC basketball.”

It’s on to the Sweet 16 and late March basketball!