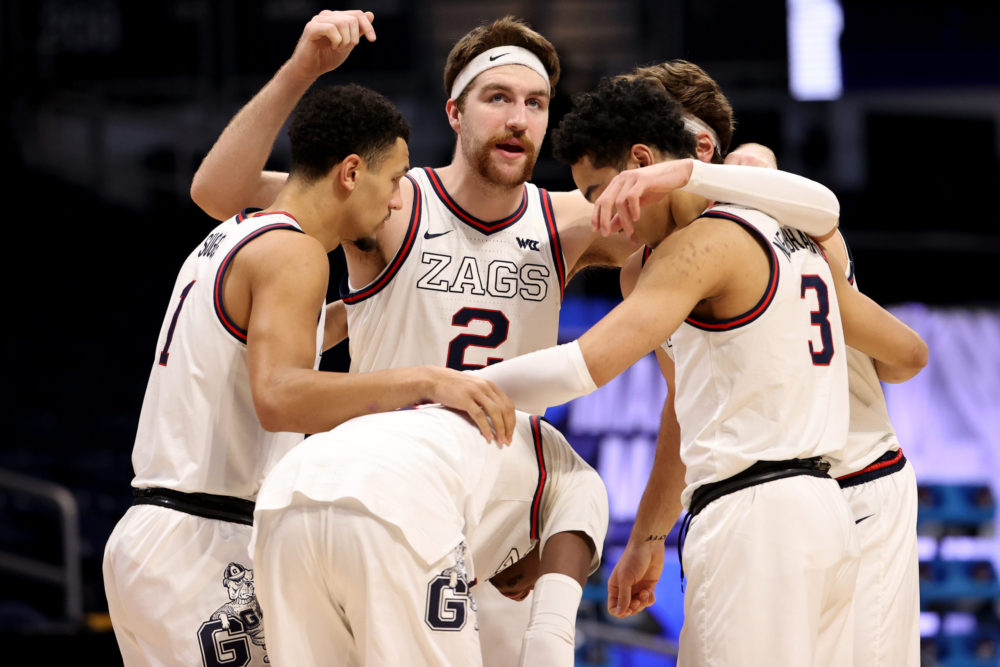 The Trojans and Zags were scheduled to play at a neutral site location before Covid turned this season in a completely new direction. If the teams had met in the fall, it would have been a one sided game. USC players and coaches were still learning the names of each other on this completely rebuilt roster. With the Trojans playing their best basketball of the season in Indianapolis over the past week and a half, this matchup in late March looks different.

Gonzaga is deservedly a nine-point favorite, but meeting a national power in March after the virus caused the cancellation of an earlier scheduled meeting is not new for this Trojan team. USC was scheduled to play at Kansas in the first week of December; the game was cancelled and the rematch in Indy turned out pretty well. Some will point out that this Gonzaga team is much better than Kansas and they would be correct, but at least USC isn’t playing Colorado on Tuesday night; we know how that would turn out.

The Zags are easily the Trojans’ toughest opponent of the season, but playing this USC team in late March might be also be Gonzaga’s toughest game this year. USC will be Gonzaga’s most difficult opponent in the Tournament so far. Mark Few and Gonzaga have become college basketball royalty. Andy Enfield’s Trojans are on the outside of the castle trying to get past the moat.

Although he likely won’t admit it, given the choice Enfield would have preferred to have been placed in any other region. This team would have had a legitimate chance to meet the Zags in the championship game. Are the Zags unbeatable? The answer is a clear “no,” but in order to win on Tuesday USC will need to play their best defensive game of the season for a full forty minutes. They can’t have droughts and let Gonzaga run off eight or ten straight points.

The Trojans must also “value the ball” and limit turnovers and avoid foul trouble to Troy’s key players. They will need to keep the Zags off the foul line. USC can’t afford a slow start and most importantly, the Trojans will need Evan to play aggressively on offense; he will need to score and be a big enough threat that Gonzaga will leave Evan’s teammates with open shots. Tahj, Drew, both Isaiahs, Max and Ethan will need to take and make their open opportunities. And Evan will need to win the battle inside against the Zags’ big man Drew Timme.

That’s a long list for the Trojans to accomplish but the Zags are that good. The Trojans might not need to play a perfect game, but they will need to play their best game of the season in order to win.

Gonzaga Has Had An Amazing Season

We all know that the Zags are trying to complete an undefeated season, which has not been accomplished in decades. Great teams have been tripped up late in the season and in the Tournament. Tark’s 1991 UNLV Rebels were top ranked, undefeated and the defending national champs until they lost to a big underdog Duke team in the semi finals. They had beaten Duke in the championship game the year before by 30.

Gonzaga’s offensive numbers are outstanding. They average 92 points, 38 rebounds, 18 assists, 12 turnovers, 8 steals and almost three blocks. The Zags have made 55% of their shots, 36% from three and 72% from the line. They had some good early season wins against ranked teams: they beat Kansas 102-90, West Virginia 87-82, Iowa 99-88, and Virginia 98-75. They struggled a bit against BYU in the WCC tournament, winning by “only” ten points and in their prior meeting with the Cougars they came out on top by 11. USC played BYU in December in a neutral site and crushed the Cougars 79-53, and the Trojans demolished Kansas last week.

The Zags are not as big as the Trojans. They primarily use a seven man rotation which includes one player at 6’10” and one at 6’8”. The starters are Corey Kispert, a 6’7” senior forward who averages 19 points, almost 5 rebounds, and 1.7 assists. He is the team’s best three point shooter, and has made 54% of his shots, 46% from three, and 90% from the foul line.

The fifth starter, 6’5” senior guard Andrew Nembhard, plays a bit below the radar compared to his fellow starters. He scores 9.2 points, grabs 2.4 rebounds and dishes out 4.3 assists.

The Trojans defense must find a way to slow down this offensive juggernaut. They will need to limit open looks from three for Kispert and the front line will need to win more battles than they lose when Timme or Watson has the ball inside. Gonzaga has not faced a defender like Evan who can disrupt so many shots and Evan will have a big defensive role if the Trojans are to win. The picture is becoming clear; USC needs a great game from Evan on both ends.

In the Oklahoma win, the Sooners made 59% of their shots but only 5-16 from three and 8-12 from the line. The Zags had 8 more rebounds and won the game at the foul line, making 23-26 free throws. If the Trojans allow Gonzaga to get to the foul line that often they have no chance to win. Gonzaga made 49% of their shots and were 8-22 from three in the game. In the win over OU Timme scored 30 points, Kispert and Suggs 16 each and Ayayi added 12.

In the Creighton game the Zags won by making 59.6% of their shots compared to the Bluejays’ 40.6%. The Zags were only 5-23 from three while Creighton made 9-24 threes. In this win Timme led the Zags with 22 points, Nembhard had 17 and Ayayi 13. Kispert and Suggs did not have big offensive games scoring 12 and 9 respectively.

What To Expect From The Trojans

USC may switch defenses during the game. The zone has been good but the Trojans will need to do a better job on the defensive boards. Whatever the defense, the three bigs, Drew and Isaiah White must limit Gonzaga’s second chances.

The Trojans have a significant size advantage up front and on the wings. They need to use their size and contest every shot. No easy baskets.

The three point shooting numbers by this group are good and USC will need these players to take and make open threes.

The Trojans Can Win, But…

USC can win this game. It will require the Trojans to shoot the ball at a high level, defend like they have in the three Tournament games so far, limit fouls and turnovers, and get a great all around game from Evan on both ends. The Trojans can’t win if Evan takes only six shots as he did in the Oregon win.

Like every other team this season, the Gonzaga defense will focus its attention on Evan. The rest of the Trojans need to score efficiently and Evan must excel on offense regardless of double teams or other defensive gimmicks.

The coaches and players believe they can win this game. They are playing their best basketball at the right time. Although they are rightly a significant underdog they have a chance to pull off one of the greatest upsets in USC history.

Where Does This Team Fit In Trojan History

Enfield has guided USC onto the national stage. Historically USC doesn’t stay very long on the big stage, but this time feels different. The Trojans may be in the middle of a stretch of sustained success.

The 2021 Trojans are already among the best teams in USC basketball history. A win on Tuesday will cement them at the top. If the Trojans fall to the Zags they are still in the conversation for the best team of the modern era.

The other contenders are: Bob Boyd’s 1971 team which was ranked number 1 for a short period in the middle of the season and finished 24-2 in a era when only one team from a conference could play in the Tournament and both Trojan losses were to UCLA.

George Raveling’s 1992 team led by Harold Miner. They were a second seed in the Tournament and finished 24-6 and ranked in the top ten. That team lost in the second round on a miracle three by Georgia Tech.

Henry Bibby’s 2001 Elite Eight team, which defeated Oklahoma State, Boston College and Kentucky in the Tournament before falling to Duke.

Let’s hope for some more Trojan history on Tuesday.