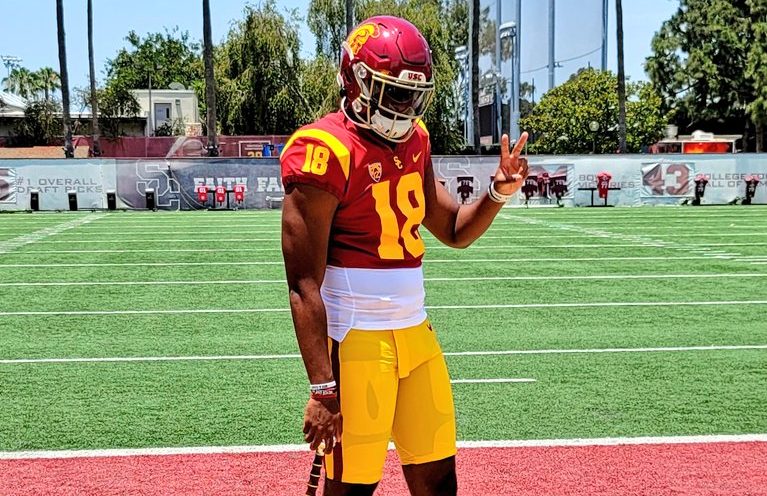 It’s been tough to find a day in June where the USC campus hasn’t been inundated with four and five-star recruits. The same was true on Wednesday, when USC hosted a contingent of FSP (Ford Sports Performance) prospects on unofficial visits.

The headliners were 2023 five-star defensive end Jayden Wayne (Tacoma, Wash./Lincoln), 2023 four-star cornerback Caleb Presley (Sammamish, Wash./Eastside Catholic) and 2023 four-star running back Jayden Limar (Lake Stevens, Wash./Lake Stevens). Wayne and Presley came into the visit with USC offers and as two of the top targets at any position for USC in the 2023 class, while Limar left with an offer from the Trojans. Also along on the visit was 2023 three-star center Landen Hatchett (Ferndale, Wash./Ferndale), who holds offers from Oregon, Oregon State and Washington State. This is the same program that helped produce 2021 USC linebacker signee Julien Simon, and a similar situation to USC coaches looking to continuously mine the top local 7on7 programs and high schools for talent each year.

The players were accompanied by parents, FSP Director of Player Personnel Ryan Clary and former Arizona and Central Michigan defensive lineman Marcus Griffin, who is the Director of Trench Recruiting for FSP.

Griffin said the visit consisted of campus and facility tours, position meetings with coaches and, of course, photoshoots in Trojan uniforms.

“They took in what ‘SC is,” Griffin said of the visiting recruits. “A lot of kids had never been there before. It was a great overall experience…They treated us first class.”

FSP isn’t a Southern California group, but the relationships with the USC coaching staff are strong. Griffin was at Arizona while USC cornerbacks coach Donte Williams coached there, and the group is familiar with USC offensive line coach Clay McGuire from his time up at Washington State. And Griffin said he’s been good friends with Marshall Cherrington, USC’s Director of Recruiting Strategy, since high school.

This trip came on the heels of a southern swing for the group, with previous visits to Alabama, Auburn, Georgia, TCU, Texas and Texas A&M. Much has been made about USC’s renewed focus on building its recruiting department and bringing in talented people who can help in all the different areas necessary to put on a great visit experience. Griffin said it’s paying off.

“I think ‘SC does a great job,” he said. “If I had to compare it to the SEC, it’s the same level of playing field, if not a little higher. They don’t have a thousand people, but they have a lot of great people in that program with great knowledge of the school.”

Griffin singled out defensive line coach Vic So’oto for the energy he brings, and also mentioned the graduate assistants and guys such as Viane Talamaivao, Toa Lobendahn and Michael Hutchings.

“They have a lot of youth with a lot of ties to USC,” Griffin said.

As for the result of the visit, that remains to be seen. The group will continue on to Arizona State and Arizona on this Pac-12 South trip and the busy month will likely continue with more visits after that for several of the players.

Wayne could be a guy to watch as far as USC goes. The 6-foot-5, 245-pound defensive end is the nation’s No. 13 overall prospect and No. 4 defensive lineman with a big-time motor and elite athleticism at the position. Alabama, Auburn, Florida, Georgia, LSU, Michigan, Notre Dame, Oregon, Texas and Texas A&M are just a few of the schools that have offered, but the one from USC came early in the process and the Trojans have been chasing him for well over a year already. He’s a former high school teammate of Simon’s.

Griffin said Wayne has been accompanied on these visits by his father, whom Griffin said is asking the right questions as he and Jayden search for that right fit for the next level. Griffin said Wayne is likely to sit down after June ends and start “honing in on what’s going on” with his recruitment.

Felt good to be in LA today!! @USC_FB showed us love! pic.twitter.com/f874giX57q

As for Presley, there’s no mistaking what’s going on with his recruitment. It’s blowing up.

The 6-foot, 170-pound cornerback picked up offers from Alabama, Auburn, Texas and Texas A&M during those visits, consistently impressing coaches in camp settings.

“I think his mindset going in was, I’m from the top left of the map and they overlook me and my guys,” Griffin said of Presley. “This is an opportunity to represent myself and I’m here for business. He’s young, but he wants that No. 1 cornerback spot. He’s pushing for that and those offers put him in that conversation.”

Donte Williams is a big deal when it comes to USC’s recruitment of Presley, and the same goes for the fact that the Trojans were his first Pac-12 offer. Griffin compared Presley to NFL cornerback Marcus Peters in his desire to get in the face of opposing wide receivers and his refusal to back down from physical contact.

“He’s a physical presence,” Griffin said of Presley. “He’s a man-press corner and has freakish feet and a killer instinct for the ball.”

At this point, Presley is the nation’s No. 119 overall prospect and No. 12 cornerback in the 2023 class, but those numbers could start to shrink over the next two seasons and he’ll continue to be a major target for the Trojans during that time.

USC took the opportunity to extend an offer to Limar during the visit, the third major offer the 5-foot-11, 190-pound back has added over the past week, joining Oregon and Texas A&M.

“He wasn’t expecting it, so that was even better,” Griffin said of the offer. “They saw what we’ve been seeing.”

I am honored to announce that after a great unofficial visit and conversation with @CoachJinks I have received an offer from The University Of Southern California! Go Trojans!🔴🟡 #FightOn pic.twitter.com/kecW97Dgbs

Looking down the road, this might not be the last time these prospects are on the USC campus for a visit. The USC coaches are in the middle of putting together an outstanding 2022 recruiting class, on the heels of a great 2021 group. Going up into Washington and pulling these 2023 standouts to help build the following class would be a major recruiting win for USC and another step toward that goal of taking back the west.