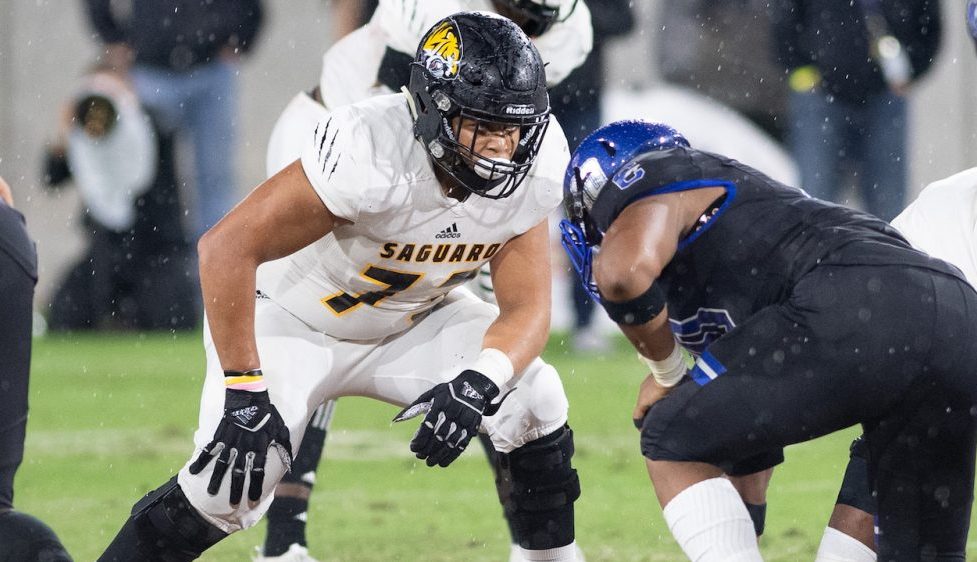 USC became the first major offer for 2022 offensive lineman Parker Brailsford late last week, and it could be the first of many. The 6-foot-2, 265-pound Scottsdale (Ariz.) Saguaro standout is likely the next in a string of talented linemen produced by his high school and the Trojans are hopeful that getting in early gives them a leg up in his recruiting race.

“It was really cool,” Brailsford said. “I think it’s amazing that I have this opportunity.”

The junior-to-be is a dominant force in the run game at right guard and has some great sophomore film. He can play center as well, though he hasn’t spoken to college coaches about a specific position at the next level.

He said the USC offer came after Trojan coaches had a chance to watch his film and were impressed. There wasn’t a specific discussion about what Drevno likes about his game, but Brailsford said he’s been told by coaches that they love his footwork and how quickly he gets off the ball. He also has the strength to hold up against bigger interior linemen and a 6-foot-7 wingspan to help keep defenders from getting into his body.

USC isn’t normally the first Power 5 offer for prospects, but the Trojans were with Brailsford.

“They thought I would be a national recruit, so they wanted to get in early,” he said of the offer from Drevno and USC.

Saguaro is familiar with producing national recruits, and it has done so along the offensive line in recent years. Jaylen Jeffers was a three-star tackle in the 2020 class who signed with Oregon, and the Ducks struck there again in this 2021 class, grabbing a commitment from No. 86 overall prospect, offensive tackle Bram Walden.

Brailsford is extremely new to the recruiting process, did not grow up with a favorite program and hasn’t even begun to look at schools or figure out how to tackle recruiting. But he has gotten some guidance from his older teammates.

“Bram was trying to tell me to stay calm and I have to be really patient,” Brailsford said recruiting process advice he received, adding that he’s gotten better on the field because of them as well. “They were good role models. They taught me a bunch of things and a bunch of little tips with their critiques.”

While California has announced that the high school football season has been pushed back to December, Brailsford said he is still unsure of what the plan is for Arizona. He’s been unable to have contact with coaches, so he’s working out at a private gym and doing field work by himself. There are so many questions as to what kind of shape players will return in this fall and what a season might look like following limited organized activity. But Brailsford said he’s found some answers during this pandemic.

“When the pandemic first started, it forced me to work out by myself,” he said. “I figured out how to compete with myself and get better that way instead of having other people to compete with.”

Offensive line recruiting will be important for the Trojans in the 2022 class, simply because it appears that USC has decided it should be important every year. The Trojans were caught a little flat-footed along the line after a hugely productive 2017 class was signed. In 2018, USC added just two offensive linemen, and then repeated that number in the 2019 class.

The lack of bodies added in those two years forced the Trojans to go after and bring in graduate transfer offensive tackle Drew Richmond last season, and also sign six high school offensive linemen in the 2020 class. USC already holds commitments from three offensive linemen in the 2021 class–three-stars Mason Murphy (San Juan Capistrano, Calif./JSerra), Saia Mapakaitolo (Mission Hills, Calif./Alemany) and Maximus Gibbs (Bellflower, Calif./St. John Bosco)– and are after a few more. Continuing to bring in a handful of offensive linemen in each class is vital to the position, and getting off to a good start with the 2022 group will be important.