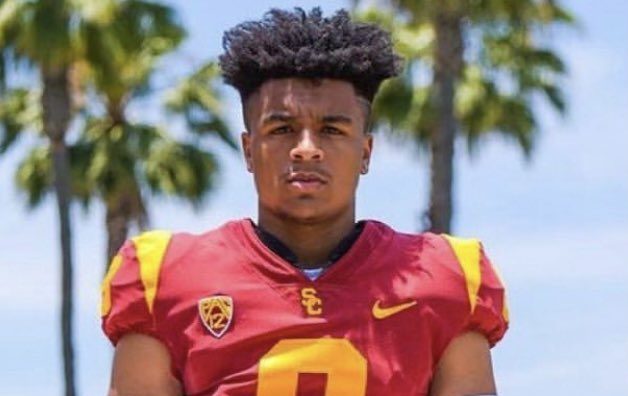 The future of USC’s defensive back room got a boost on Sunday and cornerback recruiting under position coach Donte Williams continued at a scorching pace, with a commitment from four-star cornerback Jaeden Gould (Oradell, NJ/Bergen Catholic).

The 6-foot-2, 190-pound Gould announced his commitment to USC over Penn State on Sunday. It’s a major recruiting win for the Trojans to bring in Gould, who is the nation’s No. 153 overall prospect and No. 18 cornerback.

At various times it looked as though Gould would be headed to Michigan and then to Penn State, but Williams and USC were consistently in the mix and ultimately able to come out on top in the June commitment.

Ran into some dead ends, re-routed made a way.#FightOn✌🏽 pic.twitter.com/uKtkKY1QAh

Gould possess the kind of length and athleticism Williams looks for in a cornerback and he joins a terrific group at the position in this class, with five-star Domain Jackson (Santa Ana, Calif./Mater Dei) and four-star Fabian Ross (Las Vegas/Bishop Gorman) already committed. USC also is pushing hard for four-star athlete Gentry Williams (Tulsa, Okla./Booker T. Washington), the No. 36 overall prospect who took an official visit to USC this past weekend. Five-star cornerback Will Johnson (Grosse Point, Mich./Grosse Point South) remains a top target despite his commitment to Michigan and Donte Williams continues to keep the accelerator pressed all the way to the floor when it comes to pursuing top cornerback prospects.

But Gould has the size and ability to play safety as well, or even nickel and could be a versatile addition to the defensive backfield as USC continues to stockpile talent back there. Defensive coordinator Todd Orlando’s scheme calls for at least five players in the secondary, with boundary and field cornerback and three safeties that could line up anywhere with responsibilities ranging from the line of scrimmage to deep down the middle. The Trojans have made a concerted effort to boost the talent level and available options back there. The 2021 class saw high schools prospects come in early in safeties Xamarion Gordon, Anthony Beavers Jr. and Calen Bullock. All three also saw some time at cornerback this past spring. USC also signed transfer safety Xavion Alford, and has added fellow transfer safety Chris Thompson Jr. this summer. Incoming prep cornerbacks Ceyair Wright and Prophet Brown have the talent to play early at that position and nickelback Jaylin Smith could be an option at that third safety spot down the line.

The Trojans have been on a hot recruiting run this June, since the dead period ended on the first of the month and USC has hosted a steady stream of official and unofficial visitors. Five-star defensive tackle Mykel Williams (Columbus, Ga./Hardaway) joined the USC class last week as commitment No. 7. Gould now makes eight commitments for USC in the 2022 class.