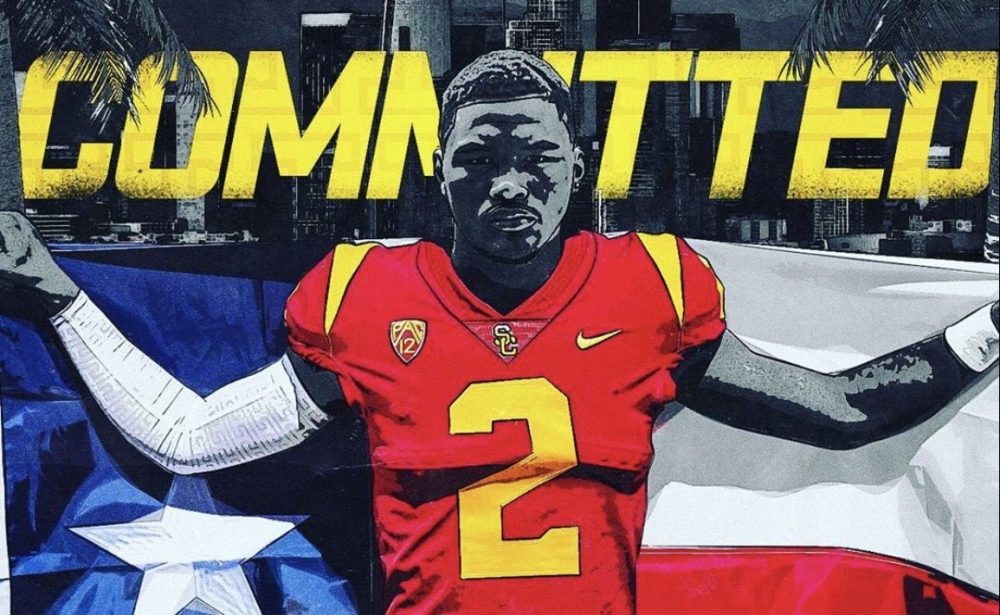 It’s become routine to check social media for the best reactions from USC coaches and staffers following a commitment announcement. The USC Trojans received a big addition to its 2021 recruiting class on Friday evening, as four-star wide receiver Quaydarius Davis announced his commitment, and the coaches were on top of things as usual.

USC offensive coordinator Graham Harrell will have the 6-foot, 193-pound Davis at his disposal in two years. Davis is the nation’s No. 105 overall prospect and is incredibly dynamic with the ball in his hands after the catch. The USC wide receiver corps was among the best in the nation last season, will be terrific again in 2020, and could be downright terrifying for defensive backs in 2021.

That year, USC could have Drake London, Kyle Ford, Bru McCoy, Munir McClain and John Jackson III in their third seasons, Gary Bryant and Joshua Jackson in their second, and add true freshman Davis and any other targets the Trojans sign at the position in this class.

Harrell celebrated the commitment using USC-appropriate swords and also alluding to the fact that Davis is the kind of player who can move all over the field and create explosive plays at any time.

USC wide receivers coach Keary Colbert has become a powerful recruiter during his time with the Trojans and he notched another one in his crew with Davis. With the commitment, the Trojans were punching with some of the national powers on the recruiting scene and came out victorious. Colbert also made sure to point out Davis’ Texas roots, with the mention of the Texas-based fast food chain, Whataburger.

The Gladiator clips have been used by several coaches, and tight end coach John David Baker went with one of those on this occasion.

Defensive coordinator Todd Orlando used a recent graphic produced by the USC graphics team highlighting the success of wide receivers moving onto the NFL. The photo was in celebration of Michael Pittman being picked early in the second round of the 2020 NFL Draft and highlights Keary Colbert, Marqise Lee, Steve Smith, Robert Woods, Pittman, Mike Williams, Juju Smith-Schuster, Nelson Agholor and Dwayne Jarrett as recent early-round draft picks out of the USC wide receiver room.

Safeties coach Craig Naivar is one of the new coaches with plenty of ties to Texas, as those connections from Harrell, Baker, Orlando, Naivar and running backs coach Mike Jinks have been invaluable in creating a path into Texas to help land Davis and fellow 2020 verbal commitment, running back Brandon Campbell (Katy, Texas/Katy).

USC Director of Scouting and Recruiting Strategy Trey Johnson has been the go-to staff member for gif reactions following commitments and he had another one after Davis, featuring Colbert.

Director of Player Development Gavin Morris shared one as well, and also got a bump in for “Team Texas.”

While Davis’ eventual commitment did not come as a huge shock, as the Trojans had been trending over the past month for the talented receiver, Campbell said earlier Friday that it would be a good day for the Trojans. When Davis said later that he’d be making a commitment later that day, the table was set.

Campbell has become one of the most outspoken recruiters for any program following his commitment to USC, and he’s out to find his next commitment following Davis joining the group.