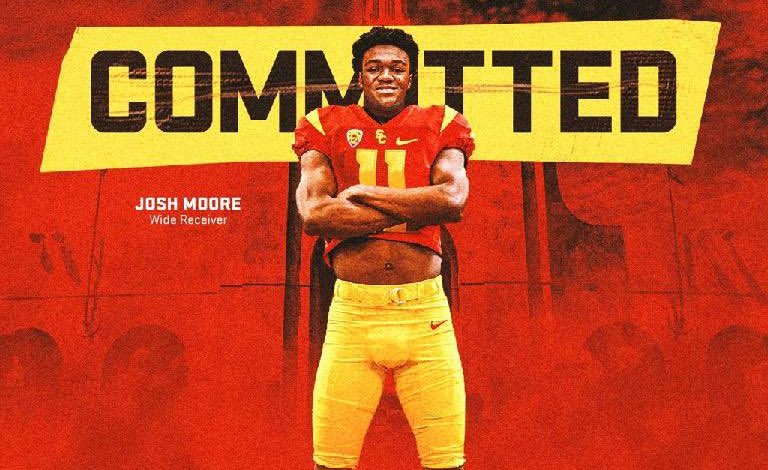 USC has been on the hunt for a third wide receiver in this class after grabbing two early pledges. The Trojans turned their attention to three-star athlete Josh Moore (Atlanta/Marist School), extending an offer in early September. The two sides had only been talking for about a month before that, but the Trojan coachers were able to put in some work and gained a commitment from Moore on Friday.

Moore said in late September that he was torn between the two schools, and the biggest factor separating them was that Stanford was recruiting him as a safety while USC saw him as a receiver.

“It’s going to come down to which one I see as my higher ceiling,” Moore said at the time, of choosing between the two positions.

According to Eric Moore, Josh’s father, USC’s success as an academic and athletic power helped tip the scale in the Trojans’ favor.

“A deciding factor was the history of the program and how it’s one of the few truly big college football brands, but has a great education too,” Moore said.

The 6-foot-2, 195-pound gives the Trojans another big-time athlete at wide receiver. Moore possesses good ball skills and dynamic ability to run after the catch. Eric Moore said the USC coaches also see his son as a big receiver who can go up and make contested catches.

Moore plans to sign with USC in December but his high school does not allow for early graduation, so he will enroll at USC for the fall of 2021.

USC coaches have spoken at length about locking down the state of California, but the Trojans have done well nationally in this class, now holding commitments from prospects in Georgia, Florida, Maryland, Nevada and four from Texas.

Moore is commitment No. 21 for USC’s 2021 recruiting class and the Trojans’ collection of prospects now ranks as the No. 6 class in the nation.

Moore is the second recent flip for the Trojans, who were able to recruit cornerback Philip Riley (Valrico, Fla./Bloomingdale) away from his previous Notre Dame pledge. Davis had been committed to both SMU and Texas before ultimately deciding on USC.