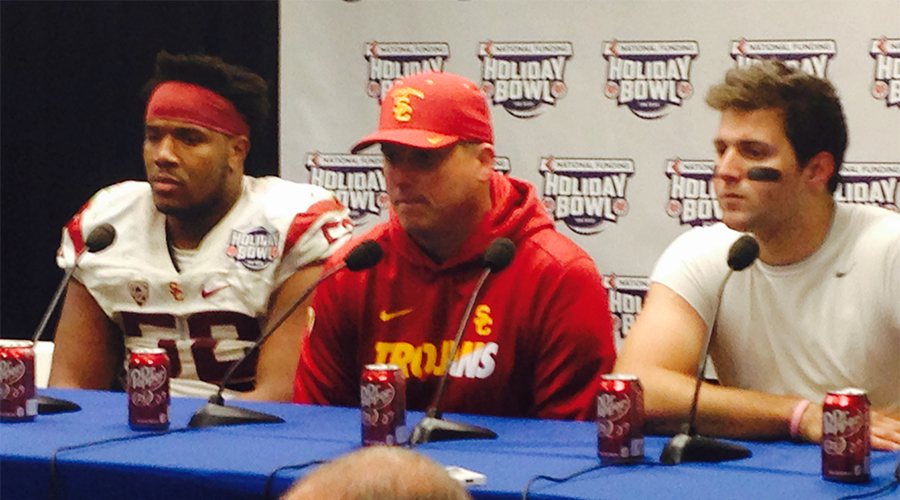 In a National Fund Holiday Bowl clash in which the Trojans struggled throughout much of the contest, Clay Helton’s squad showed enough fight to grab an improbable one-point lead over Wisconsin late, only to falter down the stretch, ultimately losing to the Badgers by a final score of 23-21 on Wednesday night.

Things looked bleak for USC from the outset. With the Trojans offense unable to put together any sustained drives, Wisconsin took a 10-0 lead mid-way through the second quarter.

The Trojans showed some life at that point, however, with Adoree’ Jackson coming up with a clutch 34-yard reception on a fourth-down play that would lead to a one-yard Justin Davis touchdown run.

It looked like the Badgers were going to run away with the game when they opened up the third quarter by forcing the Trojans to go three-and-out, before Joel Stave capped a 12-play, 64-yard drive with a four-yard touchdown pass to Austin Traylor, giving Wisconsin a commanding 20-7 lead.

But the Trojans stormed back. On USC’s ensuing drive Cody Kessler hit JuJu Smith-Schuster for a 39-yard gain, and four plays later Justin Davis darted into the end zone for his second touchdown of the night, cutting the Badgers’ lead to six.

It remained that way until the fourth quarter when Kessler hit Darreus Rogers for a seven-yard touchdown, and following Alex Wood’s converted PAT, the Trojans held a 21-20 lead with 10:19 left in the contest.

In the end, though, Helton and Co. just couldn’t hold on. On their second offensive possession of the quarter, the Badgers put together a seven-play, 42-yard drive that resulted in a Rafael Gaglianone 29-yard field goal that gave Wisconsin a 23-21 lead with 2:27 left in the game. Gaglianone also connected on field goal attempts of 38 and 33 yards earlier.

The Trojans did have their chances down the stretch, but Wisconsin defensive back Sojourn Shelton ended one drive with an interception, and USC’s final desperation offensive series ended with four consecutive incomplete passes from Kessler.

In his final game in a Trojans uniform, Kessler completed 18 of 32 passes for 221 yard and one touchdown with one interception. Freshman running back Ronald Jones II led the Trojans with 47 yards on the ground on eight carries, but the USC offense as a whole could only muster 65 total rushing yards.

Stave completed 18 of 27 passes for 217 yards and one touchdown for Wisconsin.

USC finishes the season with a record of 8-6. Wisconsin improved to 10-3 with the victory.