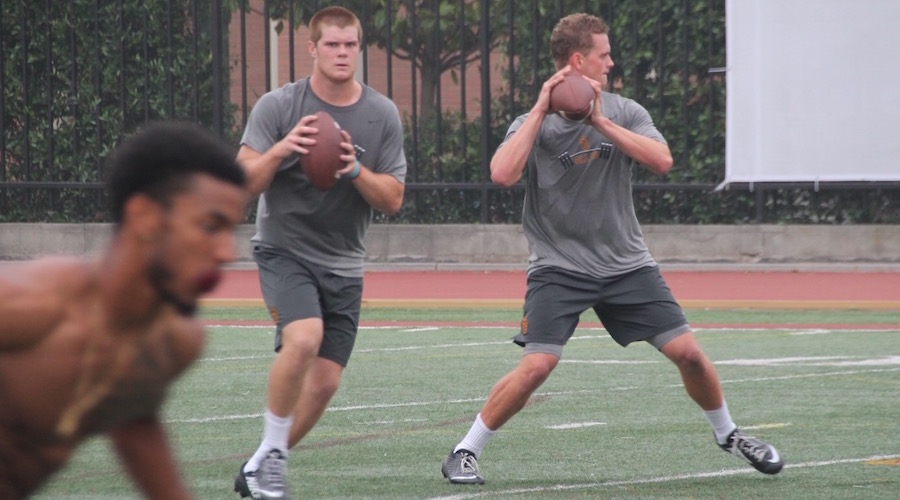 With fall camp set to start up at USC on Thursday, here are the top five position battles to keep an eye on.

One of the most coveted jobs in all of college football, the role of the Trojans’ starting quarterback is still up for grabs heading into camp, so you can be sure that no competition will garner more attention than the one taking place here.

With the departure of a three-year starter in Cody Kessler, redshirt-junior Max Browne came into the spring as the favorite, and while he played at a high level throughout much of the March and April workouts, redshirt-freshman Sam Darnold did as well – so much so, in fact, that USC head coach Clay Helton made the decision to extend the head-to-head race on into fall camp.

The good news for Helton and Co. is that both quarterbacks continued to duke it out throughout the summer player-run practices, with each signal-caller putting their own distinctive brand of play on full display.

Browne, still regarded by most observers as a slight leader in this race, stands 6-foot-5 and 220 pounds and is a classic dropback passer with a precision deep ball. More than that, he also has an outstanding command of the USC offense, and he took on a vital leadership role this summer.

The 6-4, 225-pound Darnold, meanwhile, possesses a strong arm, and he also brings the added dimension of mobility to the table. What makes him really unique, however, is his knack for creating plays out of nothing – something he continued to show this summer.

Determined to name a winner in fall camp, with no intention of rotating quarterbacks, Helton has a tough decision looming ahead to say the least. The hope is that so long as the two passers continue to push each other, the Trojans will be in good shape either way.

With a surplus of depth and experience, as well as a new position coach in Neil Callaway marking a fresh start for a number of players, there is a definite aura of competition that has taken hold all along the offensive line. That is particularly the case at the left guard position where Damien Mama and Chris Brown are embroiled in a heated battle.

It was in the spring that both players began alternating days with the No. 1 unit – a surprise to many considering Mama was a known commodity on the inside with 17 starts under his belt – including 13 games at left guard in 2015 – while Brown, with two starts under his belt, wasn’t nearly as proven. Brown turned heads with his tough-nosed, sturdy play, however, and by the final two weeks he was running with the No. 1 group on a more consistent basis than Mama – a trend that continued on throughout the summer volunteer workouts.

To the credit of Mama, who was recently named to the Outland Trophy watch list, he worked hard this offseason, showcasing a slimmed-down 324-pound physique out on Cromwell Field. But Brown, too, definitely remained focused on the task at hand, and this is a competition that, if it stays true to form so far, won’t be settled until the final stages of camp.

There are plenty of question marks surrounding both of the inside linebacker spots due in large part to the uncertain status of MIKE linebacker Cameron Smith, who did not participate in any of the player-run workouts this summer as he continued to recover from his knee injury. The 2015 Pac-12 Defensive Freshman of the Year, he is the only established performer on the inside, but there are plenty of other players who have shown promise.

Senior Michael Hutchings is the most likely to start at the MIKE spot if Smith can’t go early on. Having served in a reserve role throughout his career up to this point, he appeared to take his game to another level this past spring, while also seizing a leadership role. Olajuwon Tucker looks to be his primary competition. Rangy and physical, he started three games for the Trojans last year, compiling 40 tackles on the season.

The WILL spot is even more up in the air as Quinton Powell, Osa Masina and John Houston Jr. all figure to duke it out. Powell, a senior, spent the most time with the No. 1 group here in the spring. Listed at 6-2 and 200 pounds, he’s somewhat undersized, but he’s also extremely athletic and he’s been one of the major benefactors of the return of defensive coordinator Clancy Pendergast and his 5-2 scheme. Masina has been rotating in with Powell. A sophomore bursting with obvious potential, not to mention prototypical size for the inside linebacker position, this could be his year to break out. Coming off a back injury, Houston has been moving well this summer and will also be in the mix.

Another position group marked by uncertainty is the defensive line, which lost veteran leader Kenny Bigelow in the spring due to a torn ACL.

Noah Jefferson is a prime candidate to start at the nose tackle position, just as he did throughout a good portion of the spring, but he’ll be pushed hard by Utah graduate transfer Stevie Tu’ikolovatu. The 6-foot-1, 320-pounder compiled 29 tackles, two sacks and a Pac-12-best four fumble recoveries in 2015 for the Utes. Having played in 24 games in his career, he’s the most experienced member of the USC defensive line corps now. Sophomore Jacob Daniel, who has looked good in spurts in practice, is another candidate, as is Long Beach City College transfer Josh Fatu, as well as Khaliel Rodgers – who moved over from center this summer.

At defensive tackle, the talented Rasheem Green likely has one spot locked up already, but the situation isn’t quite so clear on the other side yet. 6-2, 280-pound Malik Dorton doesn’t necessarily have the ideal size for a defensive tackle, but he’s been running with the No. 1 group ever since Bigelow went out, showcasing a non-stop motor and a knack for making plays in the offensive backfield. Jefferson, Daniel and Fatu might also wind up challenging here if they aren’t starting at nose tackle. Christian Rector, Kevin Scott and Liam Jimmons – who has also seen time at nose – could also be in the discussion.

While Pendergast will almost certainly use plenty of nickel packages against most of the teams on USC’s schedule this season, potentially allowing three safeties to play at once, the Trojans possess at least four players who are capable of challenging for a starting job.

With Chris Hawkins and John Plattenburg injured in the spring, sophomore Marvell Tell ran with the No. 1 group at free safety, and senior Leon McQuay III (12 career starts) lined up at strong safety. Both players performed solidly, with the tall and athletic Tell looking more than at home, and McQuay appearing somewhat rejuvenated, standing out as another one of those players who has benefitted from the return of Pendergast.

Hawkins (18 career starts) and Plattenburg (14 career starts) returned this summer, both appearing healthy and ready to go, and they, along with Tell and McQuay, split reps at the safety spots in the player-run workouts. Hawkins, in particular, really looked good, making some outstanding plays in coverage.

Matt Lopes is another player who figures to contribute in a reserve role, while Ykili Ross, healthy after post-season shoulder surgery, also looks like he can step in and provide help here.

The big mystery performer at the position is incoming freshman Jamel Cook, who stands 6-3 and 185 pounds. Long and athletic, he’s an intriguing prospect. Out with an ankle injury this summer, however, it remains to be seen if he’ll be ready to go in fall camp. C.J. Pollard, who arrived in January as an early-entrant freshman, has shown some solid growth this summer, and he’s someone to watch down the line.