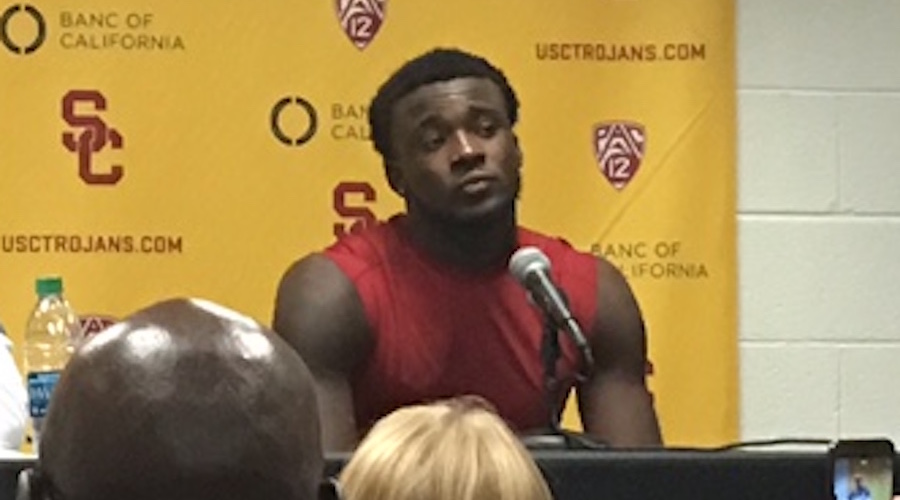 LOS ANGELES — The Trojans won their fourth consecutive game on Thursday night, taking down California 45-24, thanks in large part to a big night from USC rushing attack, which helped to keep the explosive Golden Bears offensive attack off the field, and more than at bay.

The Trojans racked up an eye-popping 398 yards on the ground, 223 of which were compiled by Ronald Jones II on just 18 carries (12.4 avg.). Aca’Cedric Ware also had a very solid outing, rushing for 130 yards on 20 carries.

USC started off strong, scoring the first 21 points of the game as Sam Darnold found Darreus Rogers for a three-yard touchdown to kick things off on the Trojans’ first drive, before connecting with Jones on a screen pass for a 16-yard score, and then hitting Deontay Burnett for a 16-yard touchdown early in the second quarter.

With the USC defense doing more than its part, the game had all of the makings of a blow out win for the Trojans from the get-go, but then Darnold fumbled the ball away on two consecutive drives, which the Golden Bears turned into 10 points.

The Trojans did rebound, however, with Darnold hitting Rogers for his second touchdown of the game at the end of the second quarter. USC led 28-10 at the half, but it was obvious that it could have been much worse for the Golden Bears, as Clay Helton’s squad had put up a gaudy 451 yards of total offense up to that point.

Cal did strike first in the second half, with quarterback Davis Webb keeping it for a one-yard touchdown run to narrow USC’s lead to 11, but that’s as close as the Golden Bears ever got.

Jones broke off a 37-yard touchdown run on USC’s next drive, before Darnold hit Daniel Imatorbhebhe for a 17-yard touchdown to give the Trojans a commanding 42-17 lead heading into the fourth quarter.

USC compiled a phenomenal 629 yards of total offense on the night, compared to 475 yards for Cal.

Darnold completed 18 of 25 for 231 yards and five touchdowns with one interception.

For Cal, Webb wound up completing 34 of 53 passes for 333 yards and  two touchdowns and one interception.