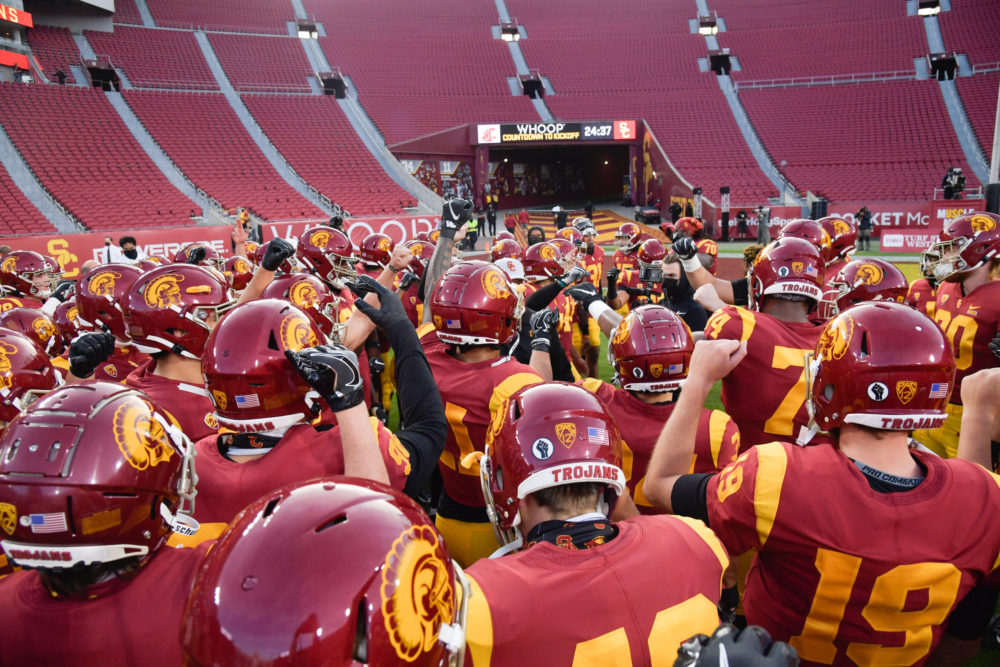 As usual, USC coaches have been active on the recruiting trail of late, as offers have gone out early this week to several Texas standouts and some interesting West region prospects in the 2022 class.

There aren’t often dominant defensive tackles in Southern California, but the Trojans might have one in their backyard thanks to a long distance transfer. Defensive tackle Hero Kanu is now at Santa Margarita High School by way of Germany, and the 6-foot-5, 295-pound prospect was impressive in his first high school outing.

Both USC and Washington offered on Tuesday, and it’ll be interesting to see how many more come in throughout the spring if he continues playing at that level during his junior season.

It wasn’t going to be surprising to see offers to California prospects pick up a bit once film started coming out during this spring season, and it’s always nice when a local prospect steps up at a premium position, such as defensive tackle.

USC made a splash in Utah by signing quarterback Jaxson Dart in the 2021 class and the Trojans are now chasing two Utah linebackers in the 2022 class, as USC extended an offer to four-star outside linebacker Lander Barton (Salt Lake City/Brighton) on Sunday and to three-star athlete Carson Tabaracci (Park City, Utah/Park City) on Tuesday.

Barton is a 6-foot-4, 215-pound, do-it-all outside linebacker with an impressive offer sheet that includes Arizona State, Michigan, Notre Dame, Stanford, UCLA, Utah, Washington and others. He’ll be a very difficult pull away from Utah, where his two older brothers played football.

Tabaracci is a as the 6-foot-2, 230-pound do-it-all athlete, who plays linebacker in addition to running back, wide receiver and quarterback. The offer from USC continues a run that features offers from UCLA, Utah, USC, Navy and Dartmouth over the past two days. The USC offer came from defensive coordinator Todd Orlando, but Tabaracci looks to be a prospect who could play on either side of the ball at the next level. He’s very instinctual and surprisingly quick and sudden for a player of his size.

Harrison-Pilot is a six-foot, 185-pound prospect who played safety as a freshman and wide receiver as a sophomore. He has a fairly eclectic list of offers at this point, as Baylor, Houston, North Texas, SMU, TCU and UTSA have all offered in state, while Arkansas, Maryland, Oregon State, Pittsburgh and now USC have offered as well.

Cook is unranked at this point, but the 6-foot, 170-pound prospect holds offers from Alabama, Auburn, Oklahoma, Texas, Texas A&M and others. He’s a very smooth receiver and adept at going up and getting the ball away from defenders.

USC also extended an offer to 2023 wide receiver Santana Fleming (Opa Locka, Fla./American Heritage), who put together an impressive showing at the Miami Under-Armour All-America camp a week ago. He also picked up a Florida offer today, and both Arizona State and Oregon had offered previously this month.

The 6-foot3, 290-pound McClellan was impressive at this past weekend’s Under-Armour All-America Camp in Dallas and has put together a strong recruiting run, with offers from Oregon, Florida, Washington State, Illinois, Missouri, Washington and now USC since February 17.

McClellan mentioned USC defensive line coach Vic So’oto and new USC quality control analyst C.J. Ah You, who is assisting with defensive linemen and who could have an impact with Oklahoma prospects, considering Ah You was First-Team All-Big 12 at Oklahoma for the 2006 season.

Misa is a four-star prospect, the nation’s No. 223 overall recruit and No. 8 inside linebacker. He plays for star-studded Eastside Catholic, which means he lines up behind USC’s final 2021 high school target, five-star defensive lineman J.T. Tuimoloau. Misa is another Pacific Northwest prospect being tugged at by both Oregon and Washington.

USC holds commitments from six prospects in its 2022 recruiting class.