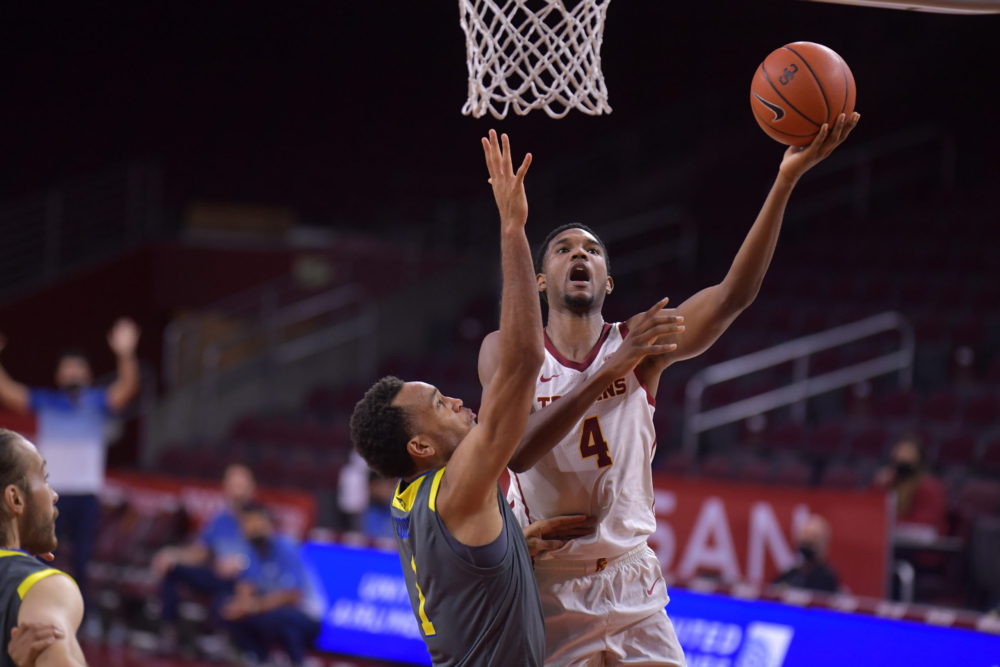 The USC Trojans had better not schedule Riverside City College later this season.

In many respects, this game was similar to that opener against Cal Baptist. In both games USC struggled against over matched opponents from smaller conferences. In the first half against UCR, it appeared that Isaiah Mobley was the only Trojan who knew the game had actually started. Isaiah had 10 of the teams’ first 14 points and 14 in the half; the Trojans only scored 27 points at the break and a Highlander three point buzzer beater gave the visitors a 5-point lead.

Evan Mobley carried USC in the second half and into overtime, and in the extra period Drew Peterson made three difficult shots in the paint to help lock down the win. The game was tied at 57 at the end of regulation. If Evan had not blocked the last UCR shot there may not have been an overtime, but in OT the Trojans played their best five minutes on the offensive end.

Coach Enfield said that UCR deserves credit and, “they played harder than us in the beginning.”

He also said the Highlanders made some really tough shots, including a banked three and another shot which bounced off the rim a couple of times before it fell in. He added that on the Arizona trip the players showed a lot of composure and maturity and he thought they showed some late maturity in this win as well. That is all true, but there are increasing warning signs that everything is not okay in Trojan land.

The Trojans were 3-21 from beyond the arc and are now 6-43 in the last two games. Enfield said that most of the misses were good shots.

“It really effects our spacing if we can’t make threes,” Enfield said, adding that it allows defenders to crowd Evan inside. The guards and wings are experienced players, and, “if the misses are now in their heads they need to get it out of their heads and make some shots.”

Drew said much the same thing. “We need to make shots. We think we have a Pac-12 championship level team with a lot of good shooters. The coaches want us to take open shots and we’re not lacking confidence from three.”

In the last two games the Trojans have given up 16-0 runs and Utah also had a big run two weeks ago. They can’t expect to keep winning if this continues. Coming into the game opponents were making 35.7% of their shots; UCR was 24-61 (39%) for the game and 12-32 from three (37%), so the problem wasn’t defense. The Trojans’ inability to score led to UCR leading at one point in the first half 25-14 after the Trojans had led 14-9. Outside of Isaiah Mobley the team did not show good energy in that first half, perhaps expecting this to be a blowout.

The Trojans entered the game averaging a conference best 77 points and led the conference in scoring margin at 13.4. This game will take these averages down.

On the first possession after the break the ball went inside to Evan and he worked around two defenders to score. That basket started a 9-0 run. The defense locked in and UCR did not score for the first 7 plus minutes, yet at the 12:22 mark the Trojans only led 38-36. The biggest Trojan lead at any point in the game was 5 points. The Highlanders only scored 21 points in the entire second half. With USC down by 1 with 12 seconds left the Highlanders‘ best player fouled out and put Isaiah White on the line. Isaiah missed the first attempt and made the second to tie the game setting up Evan’s block to end regulation.

Evan Was More Aggressive In The Second Half

As a team USC made only 24 of their 63 shots (38%), though from inside the arc they made half of their shots. Enfield needed the starters to play big minutes to get the win. If he thought some of his other players would see a lot of action it didn’t go as planned. Coulibaly, Morgan and Waters did not get into the game.

Evan played 41 minutes and finished with 20 points on 8-12 from the field and 4-7 from the line. He had 11 rebounds, 7 on the offensive end, to go along with six blocks. He dominated and allowed USC to get to overtime.

Isaiah Mobley finished with 16 points but only two after the break. He was 6-12 in the first half while the rest of the team made 5 of 20 shots. After his blazing start he finished 6-15 from the field and 4-7 from the line in 41 minutes. Enfield noted that Isaiah kept the Trojans in the game in the first half when no one else was able to score. On two possessions in the second half Isaiah received the ball near the foul line and found Evan inside, which was good to see. Evan made the shot the first time and was fouled on the other.

Drew had only scored 5 points before overtime but added 7 more in the extra five minutes. He played 40 minutes and was 4-9 from the field, 4-4 from the line and had 10 boards. He said he didn’t change anything in OT and didn’t receive any specific instructions but he was clearly much more aggressive going into the lane.

Tahj played 37 minutes and scored 10 points but only made 3-11 shots. Two of his makes were threes.

The Trojans Won The Game At The Line

USC did not commit a lot of fouls and UCR only took 9 foul shots and made only 2. The Trojans made 16-22 from the line and that production offset the UCR three point shots.

The Trojans are much improved from the line in the last three games.

The Trojans were fortunate to win this game. A loss would have seriously impacted their tournament resume and rankings in all of the polls and rating systems. The three point shooting is becoming a big problem. They can’t continue winning without big improvement from outside.

Enfield said that Ethan Anderson “should be back Thursday or Saturday.”  Thursday will be a game time decision. Hard to know how seriously to take this comment since Enfield has been saying they expect Ethan back “next week” after every game. He also noted that the Trojans had only 6 assists and miss Ethan’s playmaking.

Enfield also said they have begun a stretch of six games in twelve days. They play the Washington schools this Thursday and Saturday, travel to Corvallis to play the postponed road game against the Beavers, and play in the Bay Area next Thursday and Saturday. A couple of observations: they didn’t have to play the game against UCR. One less non conference game wouldn’t matter and they had nothing to gain. A loss would have led to a big drop in the rankings forcing the Trojans to try to make up lost ground  As it turned out they barely won, which is obviously better than losing, but this win won’t impress anyone.

In this six game stretch they are playing four of the weaker teams in the conference. Stanford is the only team in this stretch which has legitimate tournament expectations. Being forced to use his starters for big minutes to get the win over UCR is a negative, but on the bright side Evan and Drew played their best in the late going.